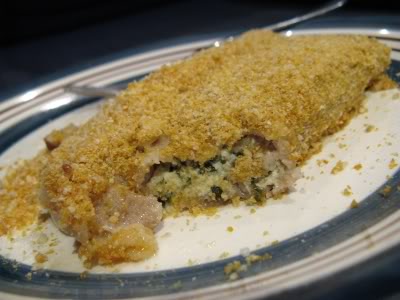 After surprising myself with some bloody good crepes, I dared to experiment with a vegan, gluten-free version... on a weeknight. I figured it was worth a shot: after all, I knew that French galettes used buckwheat flour and I've plenty of experience making 'cheesy' vegan sauces. 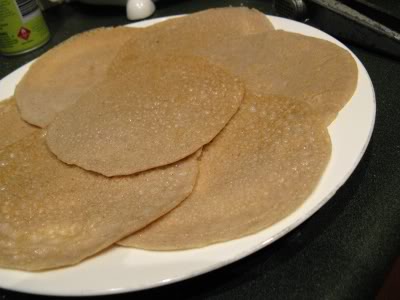 Actually most of the buckwheat crepe recipes that the internet turned up used at least as much plain wheat flour as buckwheat so there was still some substituting required. My strike rate wasn't quite as impressive as last time (now 2 duds of 9 crepes) but I was still satisfied - these crepes were tasty and pliable. I just found that they needed more oil than their gluteny counterparts for fail-safe flipping. 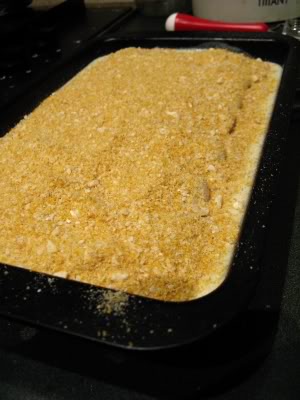 For the ricotta filling, tofu was always going to feature - I took inspiration from Veganomicon's cashew ricotta to dress it up. It ended up just a smidge astringent; next time I'd reduce the quantity of lemon juice. We had leftover filling, and it was delish on toasted sandwiches with just a drop of agave nectar to balance the flavour. 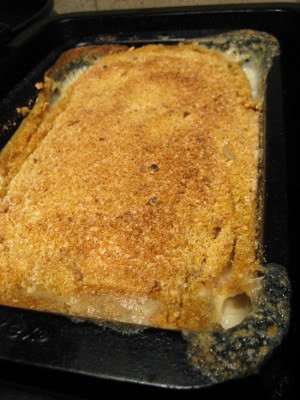 The white sauce was a cinch with substitutes, the parmesan-breadcrumb topping less so. I found rice and cornflake crumbs in the cupboard (be warned that Kellogg's cornflakes are not strictly gluten-free!) and they did well enough, though I'd be open to alternatives. This was finally my chance to try wanting kneading's parmesan recipe and I was left wanting more (next time: half the crumbs to this full quantity of parmesan flavour).
All pulled together this was passable, promising. Not as pretty, with sauce overflowing and too many powdery crumbs, but with enough flavour that we forgave it. Again, cannelloni would be easier but the crepes are pretty great - I would make them again and smother them less.

Gleegan crepe bake
(a gluten-free, vegan adaptation of this recipe)


Start by making the crepes. Sift together the flours into a medium-large bowl. Gradually pour the milk and oil over the flours, whisking as you go, until it makes a smooth batter. Cover the bowl and allow the batter to stand for 1-2 hours.
Heat up a fry-pan and give it a spraying of oil. Pour a 1/4 cup of crepe batter into the centre of the pan, using the back of a spoon to gently spread it out into a circle of just a couple of millimetres thickness. When the crepe's visibly dried out around the edges, carefully flip it over. After roughly another minute it should be cooked; transfer the crepe to a plate and repeat the process with the rest of the batter.
Use a food processor for the crunchy topping. Grind the cashews to a coarse powder, then add the remaining ingredients and blend until well combined.
Next, prepare the filling. Heat the oil in the fry-pan and sauté the garlic and spinach until the spinach has wilted - this will only take a few minutes. Take them off the heat and allow them to cool a little. In a food processor, grind the raw cashews to a coarse powder. Add the spinach and remaining filling ingredients and whiz everything together until it's nicely combined.
This is probably a good time to start preheating the oven - 180°C. Then get rolling! Place just a tablespoon or two of filling along the centre of each crepe, roll them up and place them in a baking dish.
In a small-medium saucepan, make the sauce. Start by heating the oil, then mix in the cornflour to make a smooth paste. After it's been cooking a minute, gradually whisk in the milk, doing your best to avoid lumps (I added the milk in very small batches to begin with). Bring the sauce to the boil and, once it's thickened, take it off the heat and pour it over the crepes.
Sprinkle the crunchy topping over the sauce-slathered crepes. Bake them for about 30 minutes, or until the top is crisp and golden.
Posted by Cindy at 10:33 pm