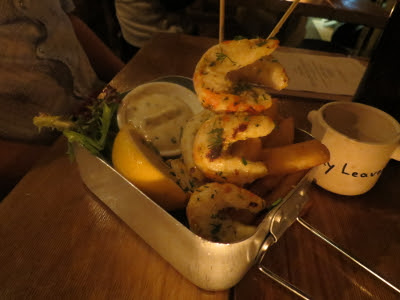 We barely left it a week before revisiting the Sweetwater Inn for more vegan pub food. Arriving after dark the bar was packed, the lights were low and two scrappy musicians roved the room, stomping out tunes. Even so, staff were determined to offer table service for meals.


Michael tested out the vegan BBQ prawn skewers ($15), which come with aioli, lemon, plenty of chips and greens. While they sure looked the part, they didn't rival the pie floater for Michael's affections - real prawns and pies probably held this same ranking in his pre-veg days anyway. 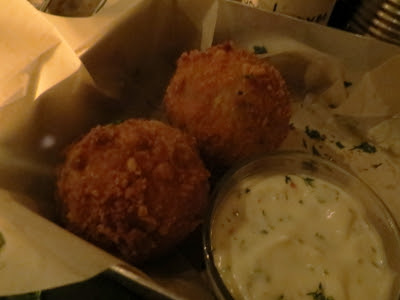 Bubble and squeak croquettes ($10) were snapped up quicker than I could photograph them - thickly crusted with a near-molten mash potato centre, dotted with peas. 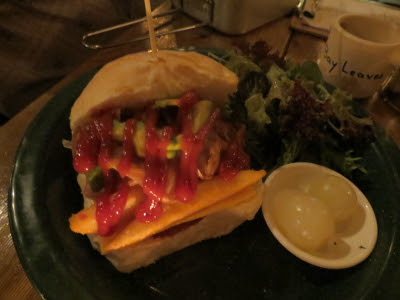 I took on the vegan chip butty ($12). No dry spuds'n'bread, here it comes with the lot - cheese, beetroot, bacon, avocado and tomato sauce flank the sturdy beer-battered chips, and there's pickled onions and greens on the side. It was a stunner. I couldn't quite believe that this was fake bacon, with its stripes of fat and 'flesh', and I was compelled to be That Person, asking our waiter to check with the kitchen that I'd actually received the vegan version. She was very sweet and reassuring, and I munched on. 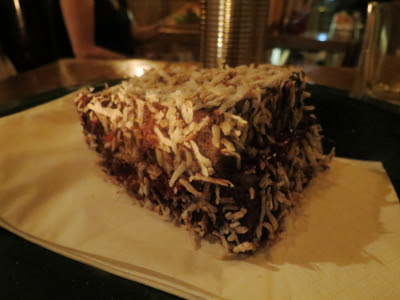 Though it wasn't on the menu, we'd spotted some limited-time-only lamingtons on facebook and resolved to split one between four. It bettered even the butty and became the night's favourite - the cake had the airiness of a sponge but somehow a bit of extra bite, and it was slathered generously with jam, chocolate icing and coconut.

Though we've not quite covered the entire veg*n menu, we're satisfied that our meals at the Sweetwater Inn are no fluke - they've pulled off some unique vegan dishes and solid service on a slow afternoon and a slammed Sunday night.
____________


You can read about our previous visit to the Sweetwater Inn here. Since then it's had an additional positive review on thehangrybitch.
____________

Accessibility: There are three steps up as you enter. Things are reasonably well spread out, with seating a mix of high stools, low chairs and kegs. This time we bought drinks at the high bar, ordered food at our table, and returned to the bar to pay. We didn't visit the toilets.
Posted by Cindy at 10:23 am