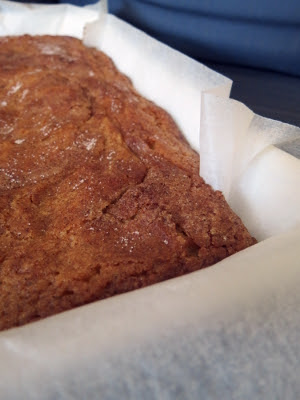 I took this Long Weekend At Home opportunity to dig into The Smitten Kitchen Cookbook's sweetest section, the bit I've been most keen on the whole time. It was tough but fun to choose amongst the cookies and pies and syrupy fruits, and eventually I went with the gooey cinnamon squares. I just couldn't imagine this gooey butter cake layer that Perelmen was so taken with - I imagined the texture of cheesecake and the flavour of vanilla in butter. The photograph kept me guessing, revealing little more than the crackly cinnamon-sugar top.


The vanilla part seemed so important to me that I bought a jar of fancy extract from the markets. It was so intense that it turned the gooey layer grey. Actually, I didn't really get my gooey layer at all - I guess I cooked it a little too long and it was just... more cake. A sweet super-vanilla-charged cake with a crackly snickerdoodle-style topping, best enjoyed with some fruit on the side. 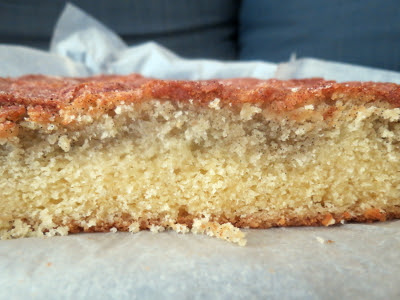 
Preheat an oven to 180°C. Line a large rectangular baking dish with paper.


Start with the bottom layer. In a medium bowl, stir together the flour, baking powder and salt. In a larger bowl, beat the butter and sugar together until fluffy. Beat in the egg and milk until well combined, then gradually beat in the flour mixture. Drop big spoonfuls of the mixture across the baking dish, then use the back of a spoon to smooth it out into a single layer.


Next, the middle layer. In a small bowl, whisk together the syrup, milk and vanilla. In a medium bowl (I used the same one as above without washing), stir together the flour and salt. In a large mixing bowl (I used the previous one without washing), beat together the butter and sugar. Beat in the egg until well combined. Gradually add the flour mixture and liquid mixture in turns, beating as you go, until everything is well combined together. Drop big spoonfuls over this mixture over the bottom layer and the smooth it out into another single layer. 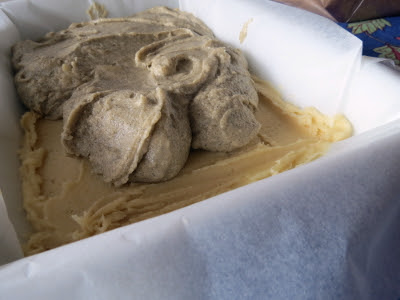 In a small bowl, stir together the sugar and cinnamon. Sprinkle it evenly across the top of the cake. 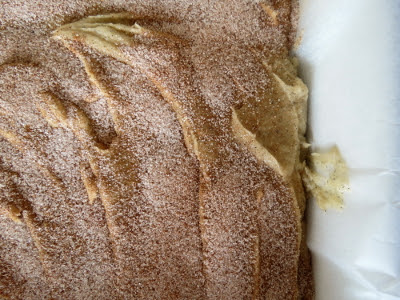 Bake the cake for 25-30 minutes, until the sugar topping has browned.