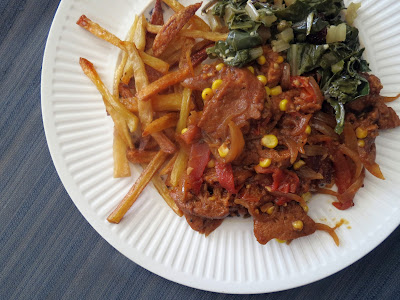 I thought it'd be fun to use the remaining seitan in a Viva Vegan! recipe that it was actually intended for. The seitan saltado got the job because it suited our vege stash. This is a vegan version of lomo saltado, a Chinese-Peruvian dish of stir-fried marinated beef with rice and potato wedges. I wasn't so interested in doubling down on the carbohydrates so I skipped the white rice and revisited the same book's silverbeet with raisins and capers.


Our slightly squelchy seitan stepped in for seared sirloin, and did so more convincingly than I anticipated. The rich marinade certainly helped it along. A little extra red wine and aji amarillo (chilli) paste stretched the marinade to a sauce for the seitan, onion and tomato strips, soaking into the oven-baked chips and mingling with the silverbeet. It's easy to see the recipe's dual heritage in the spices and cooking technique.


My only misjudgement was choosing this recipe for a Monday night. Even with home-made seitan ready to go, there's a lot to prepare here. Michael and I worked in shifts, he chopping most of the vegetables before bounding off to netball, followed by me marinating the seitan and taking on the active cooking. Dinner was late but highly satisfying, and we had bountiful lunchtime leftovers.


Clean and peel the potatoes, then slice them into long chips. Pour 2 tablespoons of the oil across to large baking dishes, and toss the potatoes through the oil, adding a pinch of salt. Spread the chips out flat, avoiding overlaps. Bake them for around 20 minutes, flipping them at the 10 minute mark - you want them to be golden and a bit crispy.


Slice the seitan into into flat, bite-sized pieces. In a medium bowl, whisk together the soy sauce, red wine vinegar, garlic, cumin and oregano. Toss in the seitan pieces, getting them thoroughly coated in the flavours. Set it all aside to marinate.


Slice the onion into thin strips. Quarter the tomatoes, cut out their seeds, and slice the flesh into strips too. Shuck the kernels from the corn. In a cup, whisk together the aji amarillo paste and red wine.


Now you're ready to stir fry! Use a wok or large frypan on high heat. Heat up a tablespoon of oil and start with half of the seitan - you want to sear it but ensure that it's still juicy and tender. When they're done, take them out and repeat with more oil and the rest of the seitan. Put the last 2 tablespoons of oil into the wok and stir-fry the onions for several minutes, until they start to soften and go brown at the edges. Pour the wine mixture over the onions, plus any seitan marinade sitting in the bottom of the bowl. Add the tomato strips, continuing to cook and stir. Grind over some pepper. Return the seitan strips to the mix, gently stirring them through, then turn off the heat.


To serve, portion out the potatoes, then pile them with the saucy seitan mix, and garnish it all with some coriander leaves.
Posted by Cindy at 8:40 am