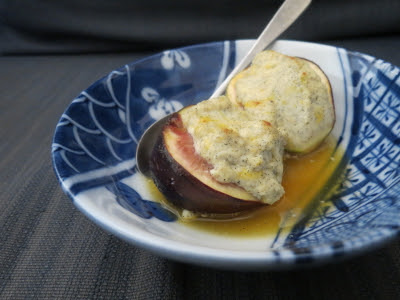 With ricotta already purchased and figs well into their brief season, I launched into April's calendar recipe on the first day of the month. This is the kind of recipe I need just once, to prove what's possible, and thenceforth I (and you!) can just go for it - adding a little something to ricotta, slathering it over fig halves, pouring over a syrup and popping it all under the grill for a few minutes. Easy.


So here it's vanilla and orange zest into the ricotta, and a syrup based on orange juice. It's easy to imagine a pinch of cinnamon or ginger or lemon or lime zest, maple syrup, herb-infused syrup, any number of fruit juices. And why stop at figs? How about ripe peach or apricot halves, a pre-poached pear perhaps.


The original recipe would have us serve these with cream, but with the right ricotta I don't think there's any need. 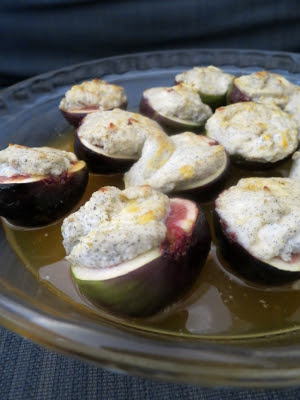 
In a small saucepan, stir together the orange juice, sugar and Cointreau over low-medium heat. Allow them to simmer until reduced by half - this took me about 10 minutes once I got the temperature right.


In a small bowl, stir together the ricotta, orange zest and vanilla.


Slice the figs in half and smear them with the ricotta, placing each one ricotta-side-up in a baking dish. Drizzle them with the orange syrup. Place them under a hot grill until the ricotta starts to brown, 2-5 minutes, and serve.
Posted by Cindy at 7:40 am