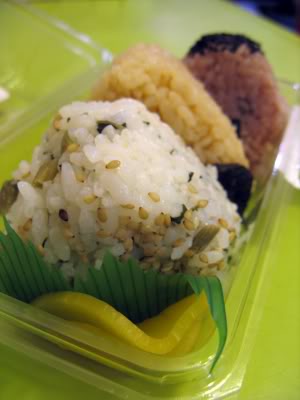 For breakfast on our third day, we dined on reduced-to-clear onigiri. 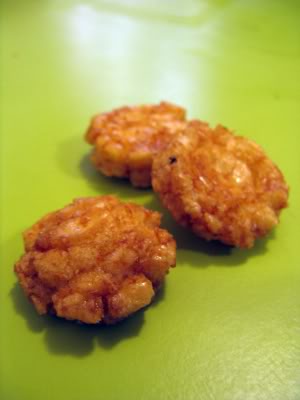 I also cracked open a packet of these rice snacks.  I've no idea what they're called but they're brilliant - light, very crunchy, and coated in a savoury soy-ish flavouring.  The puffed rice shape is well designed with high surface area for maximum flavour/oil coating.  I might even like these as much as I like chips. 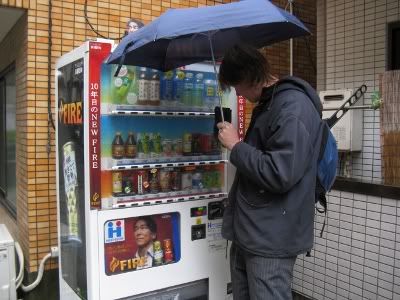 Like any self-respecting Melburnian, Michael would prefer to be starting his day with coffee.  According to the aficionados around me, coffee in Japan is as horrendous as it is prevalent.  Cafes (chains such as Starbucks, as well as small businesses) are reasonably common around Tokyo but serve very weak drinks.  Much more common are vending machines stocking canned coffee (hot and cold) - this one is less than 10 metres from the door of Matt's flat.  They're certainly no better than a local flat white but they're so constantly available that Michael's finding them difficult to resist. 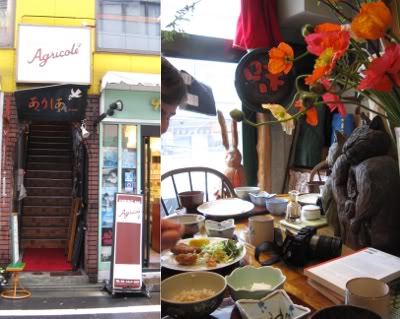 Our first excursion of the day was to Shimo-Kitazawa to meet one of Matt's friends for lunch.  Matt had located a vegetarian restaurant, called Alicia, that didn't appear in our vegan eating guide.  It's a charming little second-floor nook, with most of the dozen seats arranged along a bench overlooking the tiny kitchen space.

The menu is only in Japanese but between Matt's reading skills and the shy English of one of the staff, our choices were laid out clearly enough.  (There's also a decent summary of the menu over on this blog.)  For lunch there are six different lunch plates, such as Alicia's special, the fried lunch and the sandwich lunch (ranging from 1100-1500円 ~ $12.90-17.60). 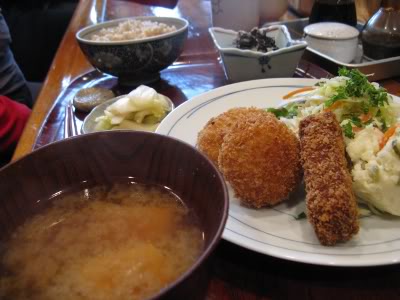 Michael ordered the fried lunch (1250円 ~ $14.60), but this was always going to be more than a few deep-fried veges.  There was brown rice and miso soup and pickles and salads and well as the crunchiest, just-seconds-out-of-the-fryer croquettes. 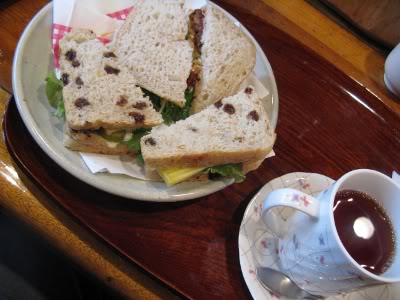 Still feeling a little jealous of Michael's tempeh sandwich from J's Kitchen the night before, I went for the sandwich set (1250円 ~ $14.60).  Though it looks a little less complicated, there are still choices to be made - there are several beverages and sandwich fillings on offer.  My cheese sandwich came with pickles and bread studded with dried fruit, which was a surprisingly agreeable combination.  It had nothing, however, on the tempeh sandwich - the crispy seasoned tempeh was sliced thinly, squirted with a little mayo and squeezed into the soft bread with lots of lettuce.  This bettered a KFC chicken fillet burger (a food I have enormous nostalgia for) in every way. 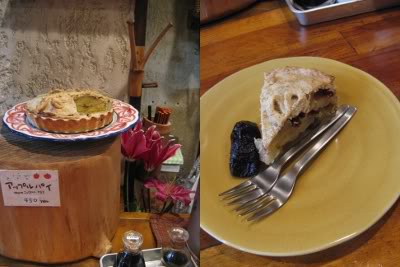 While I was swooning over my sandwich, my companions had their eye on the apple pie.  It was perched tantalisingly right next to us throughout the meal.  Marked egg- and sugar-free (450円 ~ $5.30), it was very much of the wholesome, home-made variety and bursting at the seams with fruit. 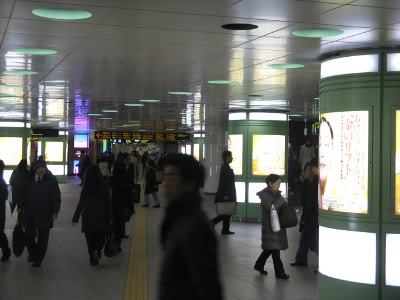 With the cold rain continuing, we tried to stay inside for much of the day.  We browsed the shops in Shimo-Kitazawa, then hopped back on the subway to Shinjuku. 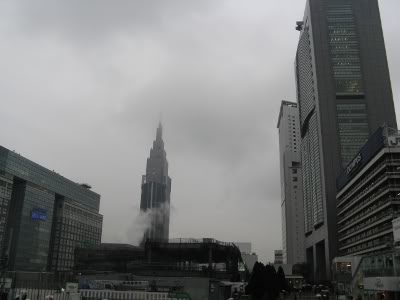 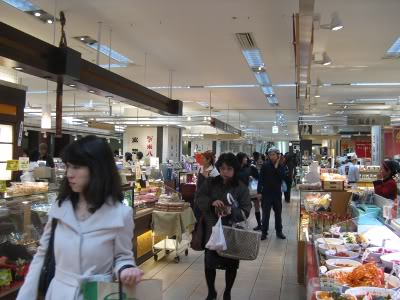 Matt showed us the basements of a couple of department stores - this is typically where all the food stalls are and, allegedly, a lot of free samples.  We concentrated on the sweet areas (since the vego status of most of the savoury food would be questionable) but didn't snag too many freebies, unfortunately.  It was still fun to ogle the stylish desserts - they were all so meticulously presented, and I was surprised that most were French and Italian-style cakes. 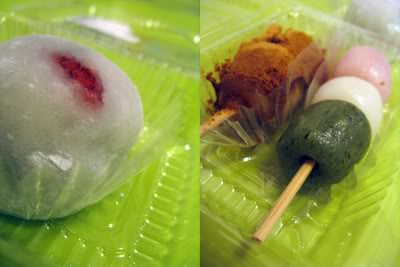 We bought a couple of macarons, and liked them well enough, but it was the mochi that were more memorable.  We had these packed up to enjoy later in the evening.  The hefty feller on the left was a mochi revelation, stuffed with a whole strawberry and a thin mauve layer of sweet bean paste - a bit of fresh juiciness really lightens the starchy dough. 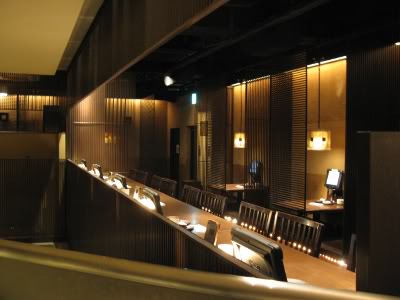 For dinner, before my major mochi moment, we headed to an izakaya for dinner.  Here we ordered drinks and snacks from a touch-screen at our table, with Matt interpreting the text and highlighting the veg-friendly options.  There was plenty to choose from - edamame, pickled eggplant, tofu, omelettes and any number of deep-fried items. 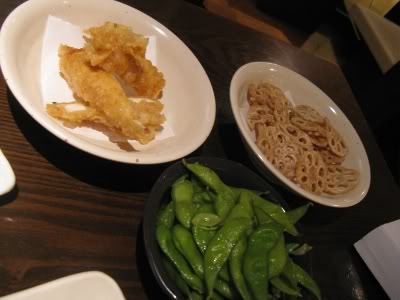 Our highlights were the battered tofu and the lotus root.  The lotus root was utterly different to the slow-cooked stuff of two nights earlier.  Here the slices were deep-fried to a delicate crispness and they had a mild seasoning that Michael and I just couldn't get enough of.  (I can only guess that garlic and salt were involved.)

With a couple of drinks under their belts, Michael and Matt got keen on visiting one of the local entertainment complexes and bashed out their sibling rivalry in the batting cages... 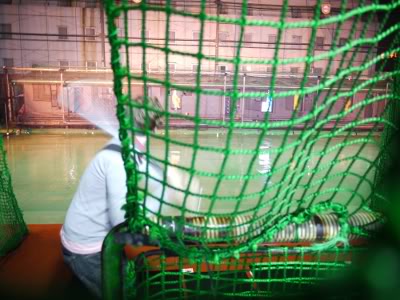 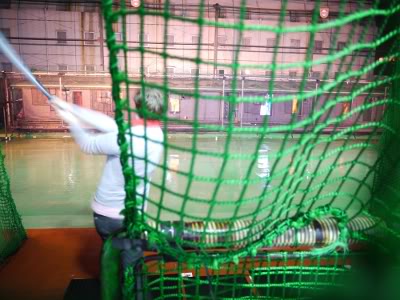 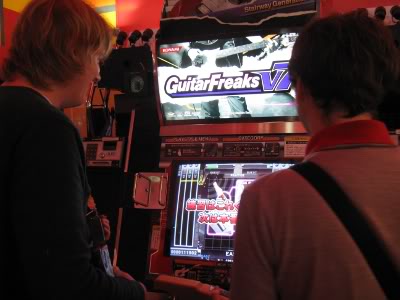 ... until I decided to smash the drums.

But it turns out one of the most amusing activities in these places isn't competitive at all... 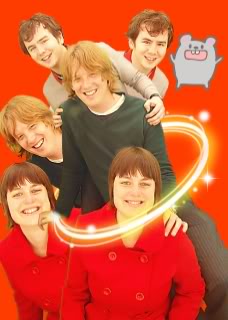