The forecast for Friday finally promised a break in the rain, so we decided to make it our day-trip day, heading off to Kamakura for a retreat from the neon and noise of the city. Kamakura is about an hour out of Tokyo and was once, many centuries ago, the capital of Japan. Now it's a tourist destination, famous for the second-largest Buddha statue in Japan and for its many temples. We started off with a wander down the main street, stopping only for some fresh mochi balls to give us the energy to explore more widely. 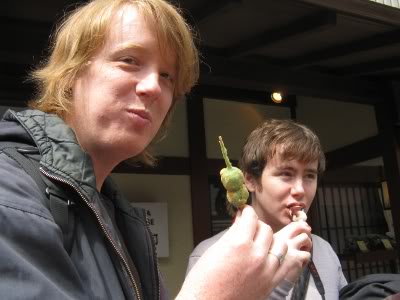 We drifted along with the crowds, finding our way to the main Shinto shrine in the town of Kamakura, Tsurugaoka Hachiman-gu. It's a large, sprawling place, with some impressive buildings and a beautiful pond and garden area. 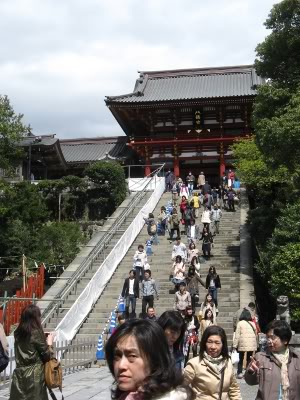 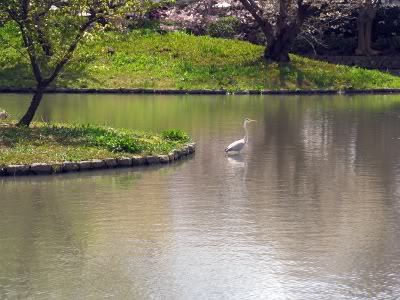 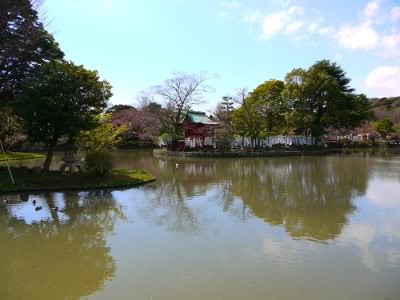 photo by Matt
Rather than exploring the temple's museum, with its 13th century statues, we decided to head back to town to find something to eat. The main street has a beautiful walkway up the middle, rather like the St Georges Road bikeway, but with more cherry blossoms. 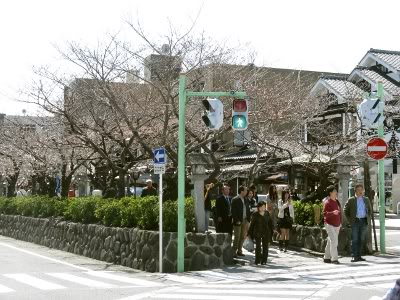 Our vegan pocket guide had nothing on offer in the Kamakura region, so we turned to the Lonely Planet, which suggested 'Bowls', which it said had both an English menu and vegie options. Alas after we sat down, we realised that it had neither. So Cindy and I watched Matt chow down a bowl of fishy rice and than we went exploring for other options. We ended up in an okonomyaki place, tucked a bit off the main street. 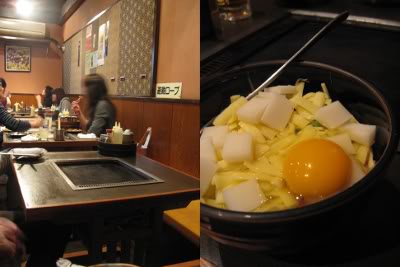 Okonomyaki restaurants are basically self-cooking affairs - you order your bowl of ingredients and then fry them up on the grill in the middle of your table. While there were a few veg-friendly sounding options on the menu here, it's important to make sure the staff are aware that you don't want fish-flakes or dried shrimp in your bowl, as these seem to come standard.
I went with a kim-chi mixture, while Cindy's mochi obsession continued, with a mochi and cheese mix (about 1000円 ~ $11.60 each). The cooking is fairly straightforward and, if you're patient enough, the pancakes flip pretty well, giving you a golden-brown cabbagey treat for lunch. 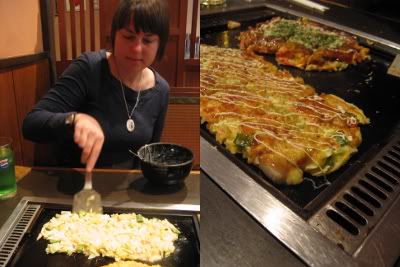 Fully satisfied (okonomyaki are incredibly filling), we headed off to find the Daibatsu at the Kotoku-in temple, via a short train trip to Hase. 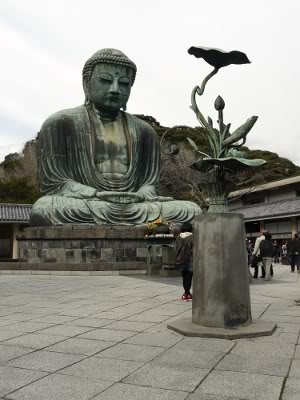 photo by Matt
The Buddha was completed in 1252 and, despite massive earthquakes and floods destroying most of the surrounding temple over the centuries, has survived basically unchanged ever since. It's Kamakura's most famous sight and is consequently crowded - a brief stroll around the rest of the temple was all we could manage before heading off to find somewhere quieter. 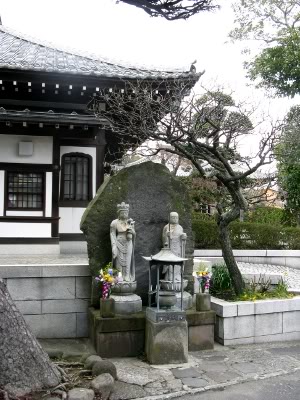 On the way back to the Hase train station, we followed our noses up to the Hasa-dera temple, which is a beautiful and large Buddhist temple, with gorgeous gardens and ponds. 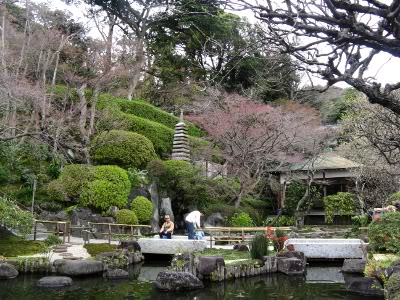 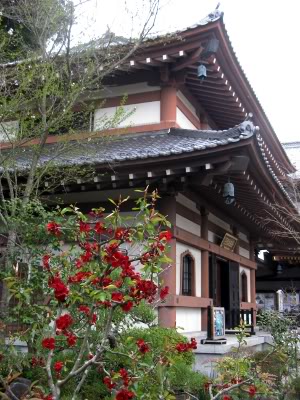 A few of the small shrines on the way up the stairs are surrounded by dozens of tiny statues of Jizo, the patron of lost children - each put there by a woman who had lost a child through miscarriage or abortion. 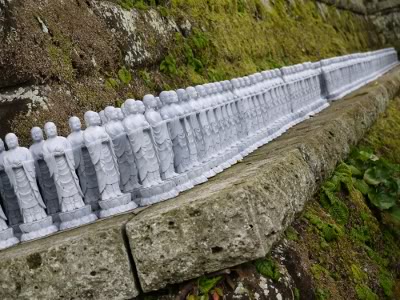 photo by Matt
With enough stair-climbing, you end up at the top of the temple, looking back across Hase and out to the ocean. All templed out, we journeyed back to Tokyo, stopping at a convenience store to grab some groceries for Matt. Cindy took the opportunity to explore the chocolate aisle, coming away with some Meiji assorted cho-pan, little biscuity chocolate treats. 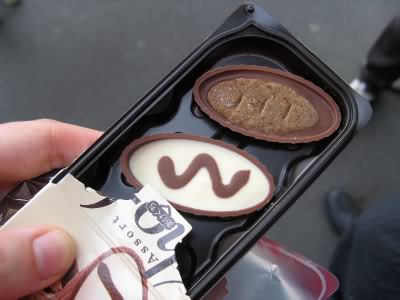 Matt had a party to be at on Friday night, so Cindy and I headed out for dinner on our own, determined to take our revenge on Pure Cafe that had lead us on a wild goose-chase a few days earlier. Like most places, Pure Cafe offered a set dinner menu (1200円 ~ $13.90), which Cindy and I both chose. 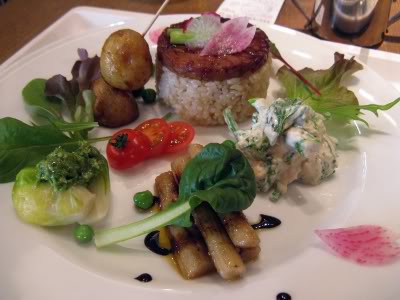 This was a wonderful plate of food - lots of beautiful vegetables, a delicious marinated tempeh slice, and some tasty pickles and sauces. The little radish flower petals were a beautiful touch, but the tastiness title was won by the pesto on the brussel sprouts. Having been wowed by the savoury course, it seemed essential that we check out the dessert options, with Cindy deciding on a vegan tiramisu and a chai (600円~ $7.00 each) to finish things off. 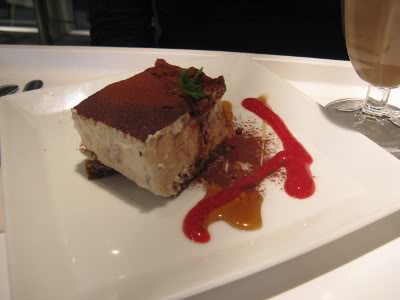 The cake was outstanding, capped off by the glorious berry smears that accompanied it. 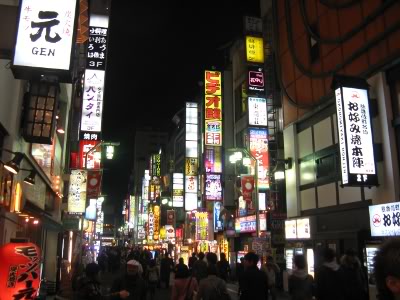 Our final adventure for the night was an Ipod walking tour of Tokyo's notorious red-light district, Kabukicho. Matt had done the walking tour previously and promised us a couple of fun hours exploring the seamy side of the bright lights. The tour takes you through the history of Kabukicho, originally set up as a neighbourhood for enlightening entertainment that was quickly overrun by vice and alcohol so that despite the name, not a single Kabuki performance has ever been put on in the area. Nowadays it's chock full of hostess and host clubs, offering some bafflingly hair-styled folks for hire. 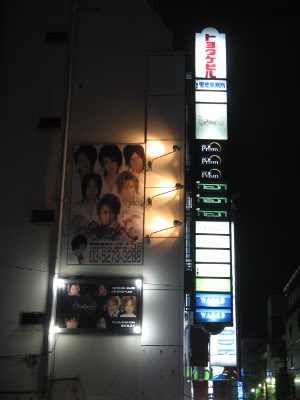 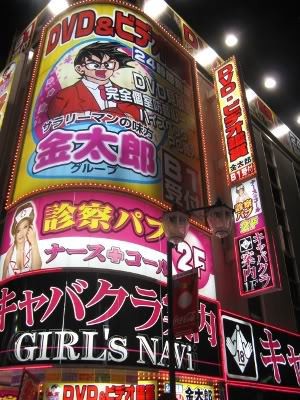 The tour takes you through the lobby of a love hotel and around some of the more family-friendly entertainments as well as through the seediest parts of town before winding up in the Golden Gai, a few blocks chock full of tiny bars, each seating no more than ten people. 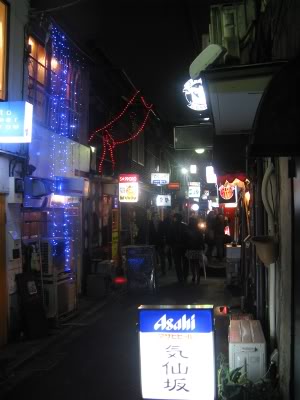 Most of the bars are really just places for a group of regulars to hang out together, although there are apparently a few that welcome strangers and even Westerners. We were too shy to check them out and besides, midnight and the end of the train service was fast approaching, so we pushed our way on board a packed Yanamote line train and jostled our way homewards for a well-deserved sleep.
Posted by Michael at 5:26 pm