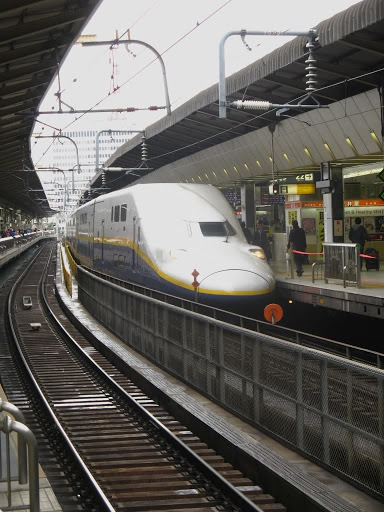 On Sunday morning, we made our way to the Shinkansen and on to Kyoto. While Shinkansen tickets are expensive, they get you where you're going to several times faster than alternative means of transport. They are as clean and prompt as one would expect in Japan but they have another unexpected feature - heaps of leg room. (Michael, in particular, loved this.) 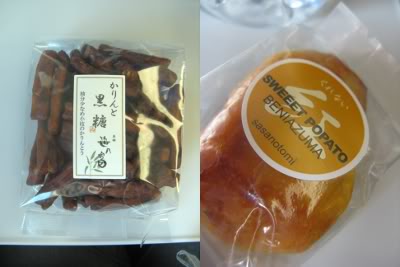 Michael scouted the platforms for snacks and come up with these four novelties. We began with the dark brown crispy sticks, thinking that they might be flavoured with soy sauce or perhaps even a savoury concoction that we didn't like. Far from it - it was actually just dark sugar! So the sweet potato was hardly 'dessert'. The starchy texture had me wondering if it had been tampered with at all, but it was sweeter than any unadulterated sweet potato I've eaten before.

By the time we made it to our Kyoto hotel, the sky was looking grim and we decided to retire to our room for a couple of hours. Here we gobbled up the remaining snacks - rice cracker-coated peanuts and a red bean-stuffed pancake. 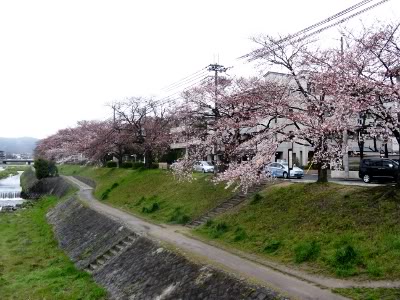 Eventually we convinced ourselves that an exploratory walk was in order. We donned our coats and grabbed our umbrellas on the way out, tracing the Kamo River south. 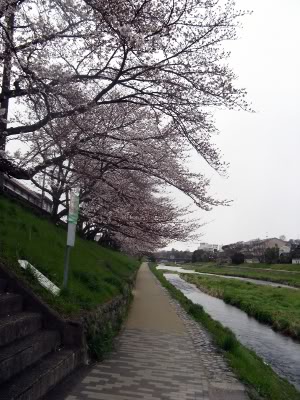 It was cold and a little wet but most of the time, the just-about-to-bloom trees (and for Michael, the bird-watching) made it worthwhile. 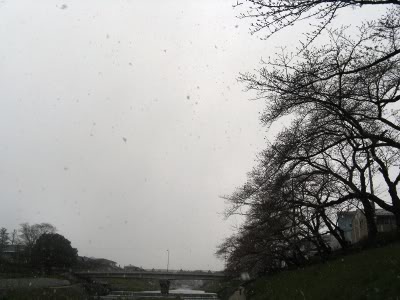 And then, my friends, it snowed. Snowed! It was strange and unexpected and almost uplifting. While it was still cold and breezy, the snow fell so much more gently than rain.
(I didn't take any particularly convincing snow photos [too focussed on walking and not getting lost] but I can assure you that it was dense and swirling for several hours! It even accumulated overnight on the nearby hills off to the west, evaporating in the mid-morning.) 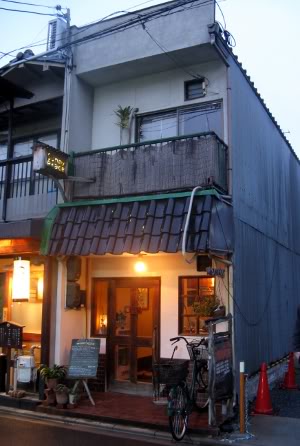 We took comfort and dinner in the aptly named Sunny Place. Warm with a cozy golden light, this was another small narrow space like Alicia back in Tokyo, with just a long bench overlooking the kitchen area. 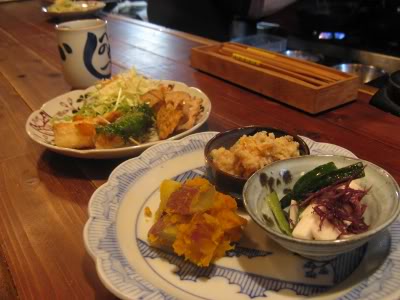 The menu did not offer enough English for us to navigate with ease but fortunately the young man working that night had an impeccable grasp of our native language. (He explained later that he spent some time working in the UK. However, he also revealed that this was his last night in that job so I'm unsure how us English-only types will fare in the future. The older female cook didn't speak English at all.) 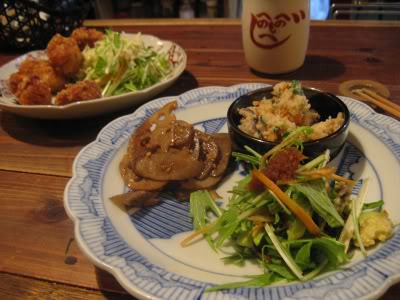 The best approach was to go for a dinner set (1200円 ~ $13.90), though there was still some choosing to do. First there's the fried feature - Michael went for the tempeh and veg cutlet while I happily took their recommendation of the fried soy chicken. Then there was the array of cold sides displayed on the bench, of which we could each choose three. We were able to sample all five of them between us - the simple green salad with avocado chunks probably rated as my favourite.

It was an utterly comforting meal taken in what felt like someone's living room. As we confusedly consulted our map on a snowy street corner a few minutes and blocks afterwards, a local fellow stopped his truck, led us out to the middle of the intersection, and wordlessly but effectively pointed us in the right direction. Though the weather was unhelpful and we were linguistically incapable, Kyoto did its best to set us right.
Posted by Cindy at 7:58 am