After a few hectic days of sight-seeing, we started Saturday off slowly, mooching around the house and considering our options for the afternoon. This gave us time to try out a risky breakfast: natto! Natto is a weird fermented soy bean dish, that's commonly eaten with rice as a breakfast food in Japan. 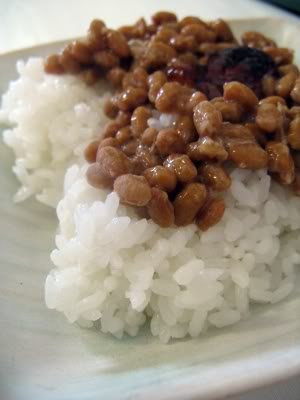 It smells as bad as it looks. It doesn't taste quite as bad as you'd expect - it's strongly flavoured but pretty agreeable, it's just texturally and olofactorally disturbing. 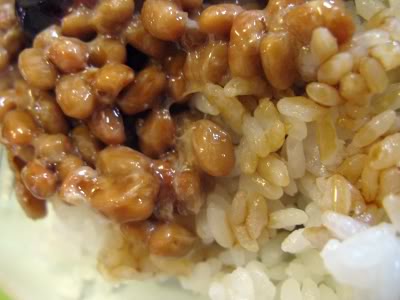 With natto under our belts, Cindy and I were ready to face the day. The sun was peeking out again, so we focussed on outdoor activities, starting off with a wander through the Imperial Palace East Garden. 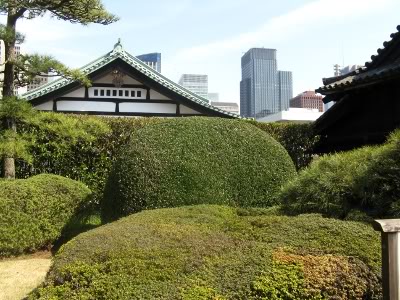 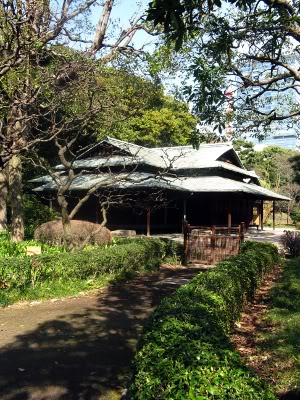 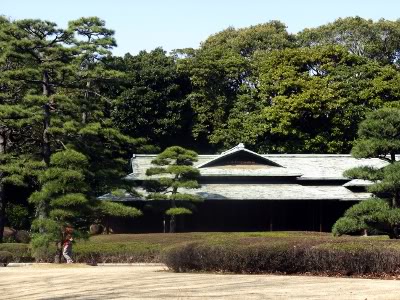 The moat provided me with my first identifiable new bird for the trip: the northern shoveller. 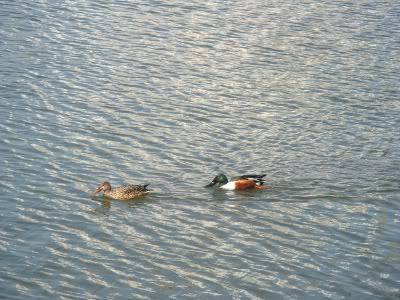 The cherry blossoms hadn't quite reached full flower yet, but they were still pretty stunning. 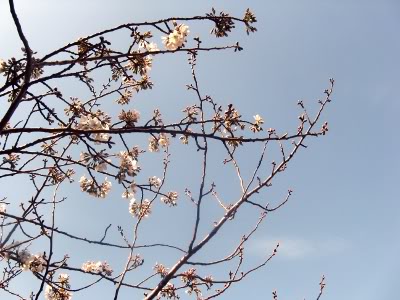 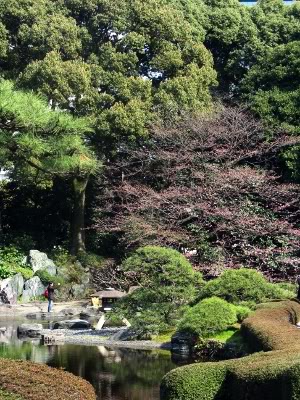 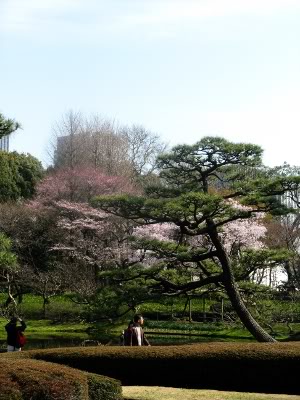 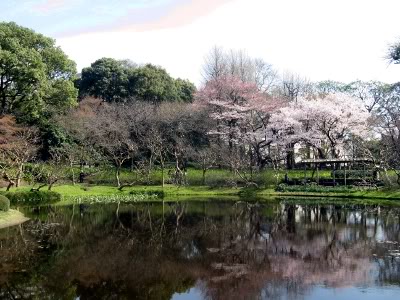 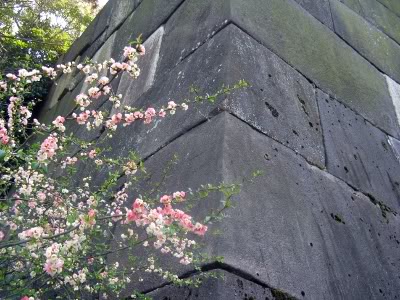 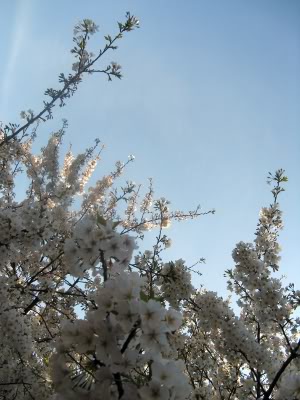 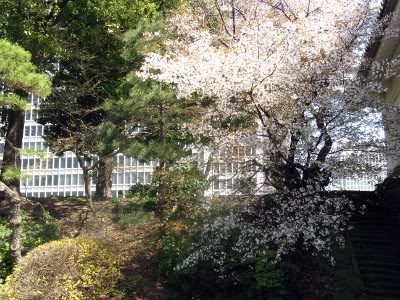 The next stop was Ginza, for a quick stroll through Tokyo's poshest neighbourhood to lunch at Nataraj vegetarian Indian restaurant. 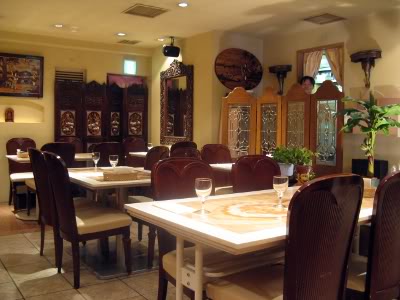 Being Ginza, things weren't cheap, but there were a range of veg-tastic thalis to choose from and as neither of us had eaten since the natto, we were both ready to hoe into them. I ordered the Maharani Thali (3500 Yen, $40), which was made up of three curries (palak paneer, navratan korma and the mysterious 'nataraj curry'), a garlic naan, a couple of tandoori gluten nuggets, a mayonnaisey salad, some pickles and some rice plus a mango shrikhand for dessert. 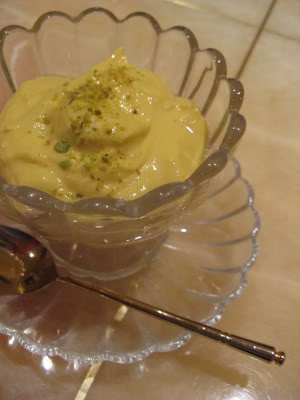 Aside from the salad, this was all pretty great - particularly because I was starving and there was heaps of it. The curries lacked a bit of spice, but were rich and full-flavoured and there's nothing better than a fresh naan bread. Cindy went for a slightly smaller option, the Padma thali (2500 Yen, $29), which came with just two curries (chana curry and vegetable curry) and was lacking the dessert.

She particularly raved about the tomato-based vegie curry, which was creamy and delicious. All in all this was a very satisfying lunch: the food was tasty and plentiful, the staff were extremely friendly and quite excited that we were both vegetarian and the setting was quiet and peaceful. The prices are just a bit too steep to really recommend a visit - possibly one of their non-Ginza branches would be a cheaper option.

By the time we finished 'lunch' it was getting on to 4:30, which meant I had to scurry off to meet Matt in Koenji for a gig. The great thing about live music in Tokyo is that it's designed for lazy old people like me - the shows start at 7 and the last band is usually done by 10:30. Brilliant. The venue for the night was The Penguin House, a tiny room with no real stage that would fit maybe 40 people inside. 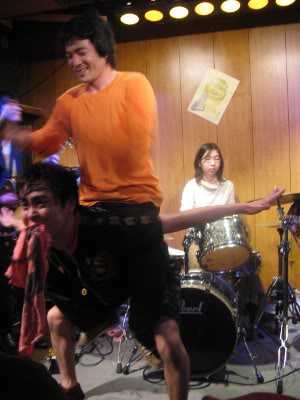 The first band of the night were the insane PukaPuka, starring a guy whose only job is to dance around madly, yell out random things and impersonate a motor bike. By the end of the show the singer was riding him like a horse. It was all very weird. Weird but compelling. Especially their ramshackle cover of ACDC's 'Thunderstruck'.

Next up were My Pal Foot Foot who, despite the odd name, are a much more conventional band. They were great - especially once Julian from Kes Band had joined them on the drums. 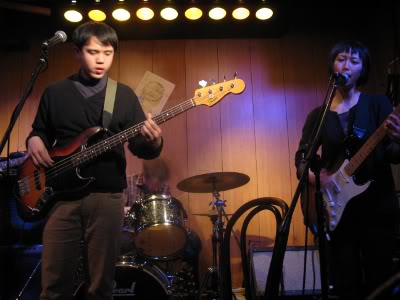 The show was basically a launch for a split album that My Pal Foot Foot and Melbourne's Kes Band have just released, so KES were the final act, with members of Foot Foot joining them at various points in the set. 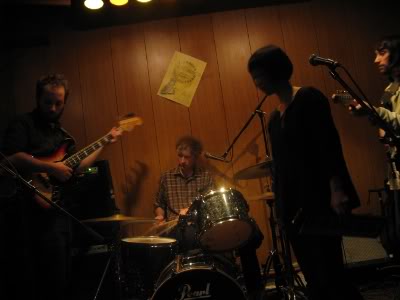 It was a great night - three excellent bands, a tiny intimate venue and a crowd that was there to listen and dance, not chat their way through the music. Despite the crowd forcing Kes Band into two encores, we were still out of there by 10:30 and home before midnight. That's the way rock and roll should work.
Posted by Michael at 10:57 pm