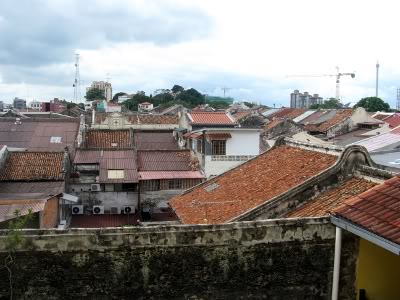 Our one full day in Melaka dawned fine and hot - too hot to go adventuring anywhere for breakfast, so we settled down for a fairly disappointing buffet at our hotel. It was all pretty meaty, but we did get to have our first sample of kaya, which was a pretty tasty treat (although not pictured).

The main plan for the day was to wander through the Lonely Planet's Melaka walking tour. Our first stop was Hokkien Huay Kuan, an impressive Chinese guildhall decorated lavishly with warriors and tigers. 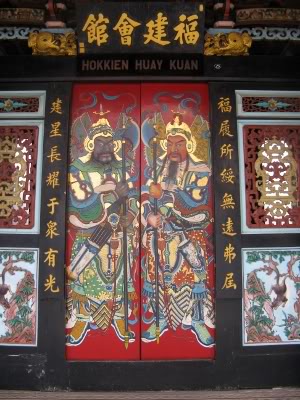 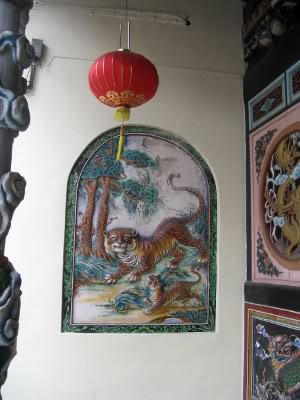 Then it was a quick jaunt out of Chinatown to the historic town centre by the Melaka River. 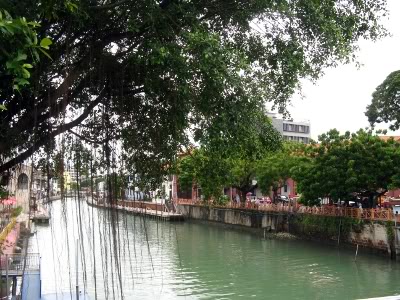 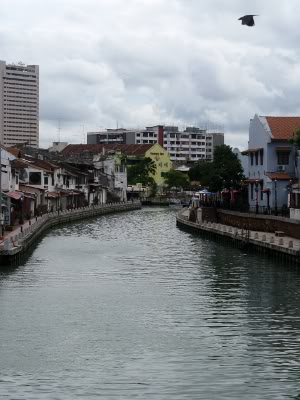 The centrepiece of historic Melaka is the Town Square, surrounded by the Dutch Stadthuys, the Queen Victoria Fountain and overrun with Melaka's famous blinged up tri-shaws. 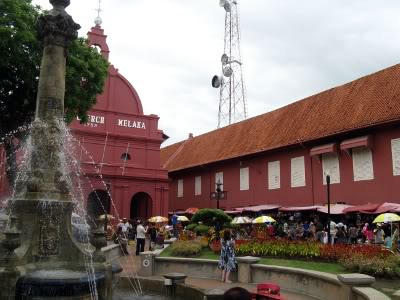 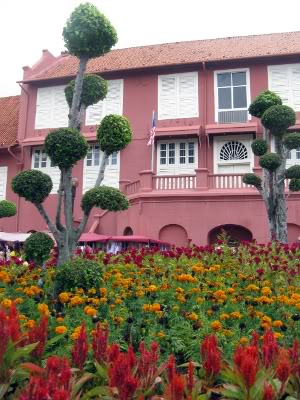 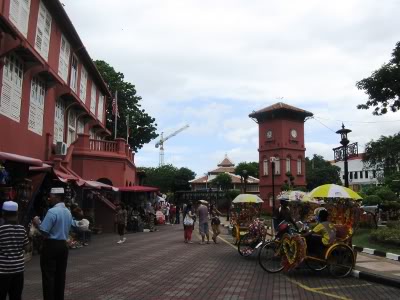 Then it was up the hill to the ruins of the 16th Century St Paul's Church. Perched on the top of the hill, the church ruins catch the sea-breeze and are probably the coolest part of the town. They're also impressively moody and atmospheric. 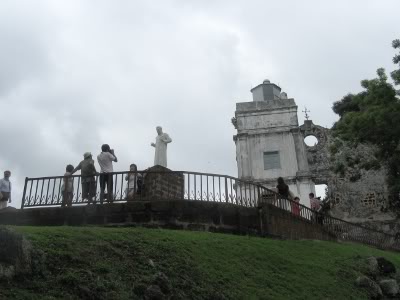 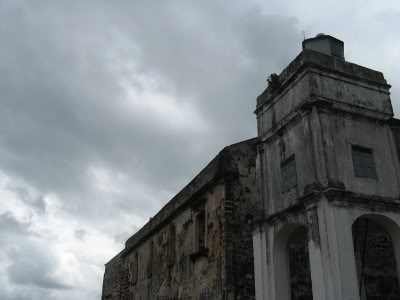 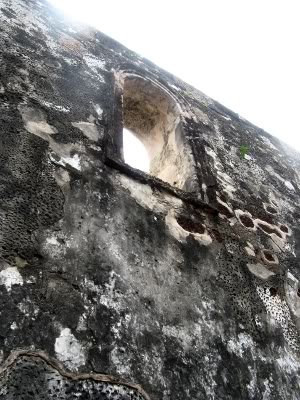 Down the other side of the hill is the last remaining chunk of the old Dutch fort A'Famosa built in 1512. 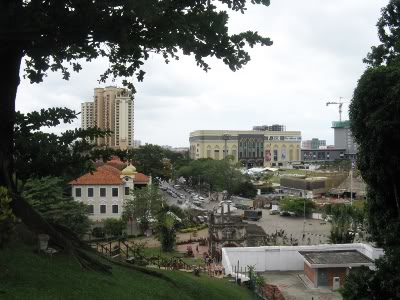 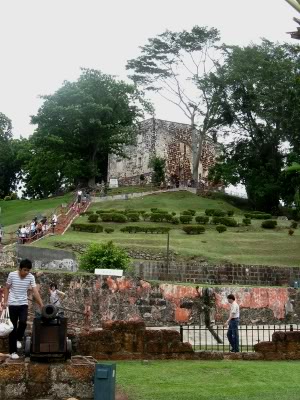 Having worked up a hunger with all this walking, hill-climbing and sweating, we decided to break up the walking tour and track down some lunch. Weirdly, the map in the Lonely Planet guide to Melaka had a whole section of the town missing, but luckily the streets were numbered logically, and we managed to track down Mei Lin Vegetarian Restaurant without too much trouble. 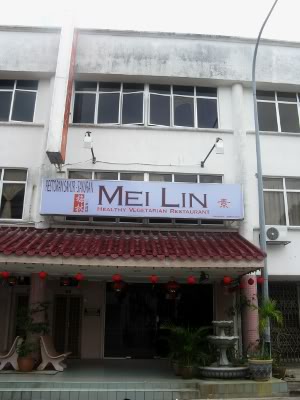 It's a mock-meat Chinese restaurant with blessed air-conditioning and an astonishing menu - there were dozens and dozens of wonderful sounding dishes. Clearly most of the Westerners who come through their doors are a bit hopeless - despite our best efforts, we were forced to eat with forks, as soon as we pinched chopsticks from a spare place setting the waitress came by and cleared them away - twice! We settled on three dishes - two mains and an entree. First up were the 'chicken' satay sticks (RM6, ~$2). The faux-chicken was well put together, but was really just a vessel for the wonderfully spicy and peanutty sauce. 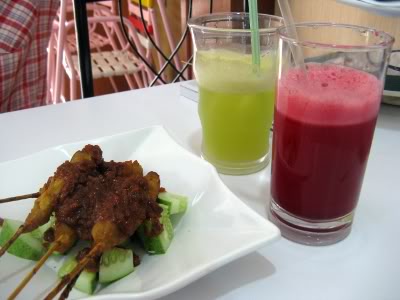 We couldn't resist ordering the fanciest thing on the menu as one of our mains - the chef's speciality ginger fish (RM28, ~ $10). 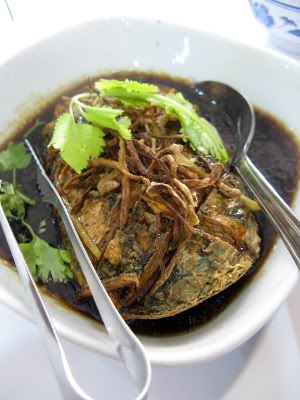 This was the most amazing faux-fish I've ever tasted, with tender 'flesh' and slightly crispy skin, swimming in a rich ginger and coriander sauce. The fish had been embedded with a few big chunks of ginger as well, giving it a depth of flavour that took it well above the usual fake fish delights.

Finally, we also went with the Ayam Masak Merah (red-cooked chicken, RM8, ~ $3), a tomato and chilli based dish with just the right amount of bite. 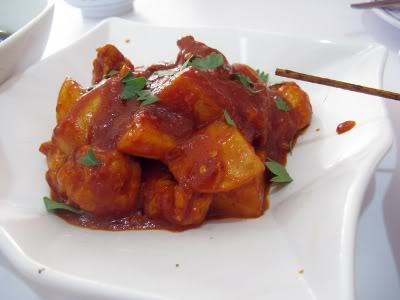 We had a cracking lunch at Mei Lin - possibly the best faux-meat meal that I've had anywhere, and certainly the best value. As we were about to leave, one of the other customers friendlily grabbed us and told us about two other nearby vego places: MG's cafe and Simple Life, neither of which we ended up trying. Still, MGs hadn't turned up in my internet searching during our Melaka-planning, so it was good to know that there were some other well-located options out there for vegos spending more than a day or two in town.

Re-energised, we headed back out into the heat to finish our walking tour, wandering mostly around the streets of Chinatown. The dragons adorning the Eng Choon Association building were a particular highlight. 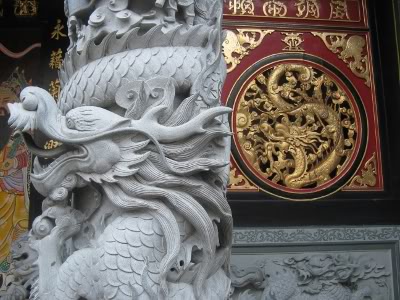 Again the heat started to knock us around, so we ducked into a cafe for our first shot at a weird Malaysian speciality: Cendol. 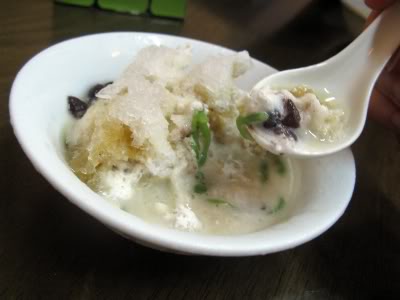 Cendol is an icy concoction made up of coconut milk, green noodles, red beans, sugar and shaved ice. It's a little strange, but incredibly cooling and quite tasty. We'd return to cendol a few times in the coming days to help us get through the sweltering Malaysian heat.

We had a bit more walking left in us, swinging by the Cheng Hoon Teng temple: 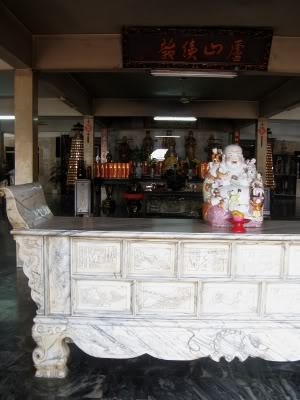 and past the Kampung Kling Mosque (where we heard the evocative call to prayer). 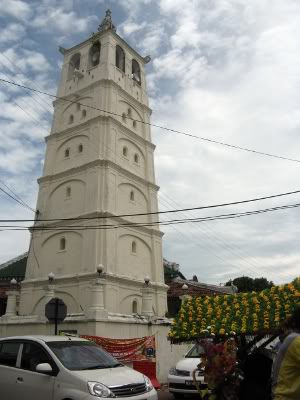 Then it was back to the hotel for a quick rest before dinner. Unfortunately we didn't have a Friday night in Melaka to sample the famed 10-dish vegetarian feast at Selvam (which goes for a ludicrous RM6 or $2), but we decided to check this restaurant out anyway.

The vegetarian thali came in at RM6 ($2) each, and was served up on a coconut leaf and with no cutlery. 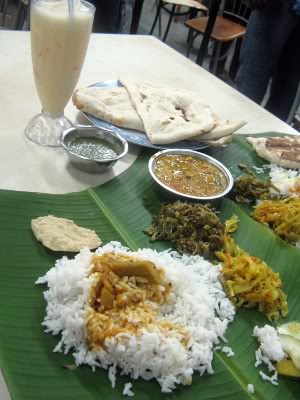 The thali consisted of a big pile of rice, two fairly dry vegie dishes, a daal, some pickles and fresh naan breads. Having watched a few more coordinated people calmly polish these off with their bare hands without smearing it all over themselves, we decided to brave it without begging for cutlery. It wasn't a pretty sight, but we quickly stopped caring, too caught up in the spicy delights in front of us. Life's pretty great when you can stuff yourself to bursting point with curry, have a lassi and a beer and still walk out having spent less than $6 in total (for both of us!). 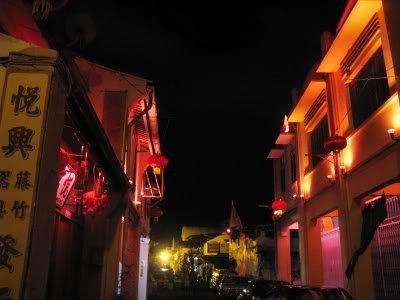 We wandered home via the Chinatown markets, grabbing some dessert in the form of Melaka's Portugese-inspired custard tarts, which were small enough for us to squeeze in and tasty enough for us to want seconds. 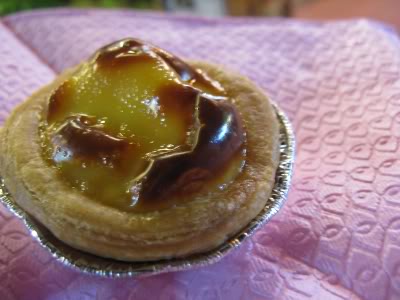