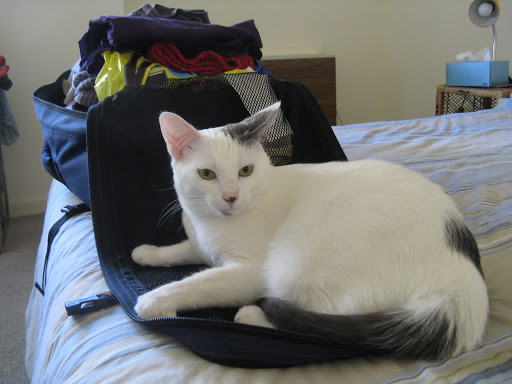 As we were getting set to leave for Japan, our cat Zimbra realised something was afoot and decided to make Cindy feel even more guilty about leaving him behind by staging a silent protest on her bag. Once we got here, Cindy's kitten-guilt grew even stronger, and the only way to get her through it was to take her to Nekobukuro - Cat House - a weird cat play area at the top of a department store in Ikebukoru. 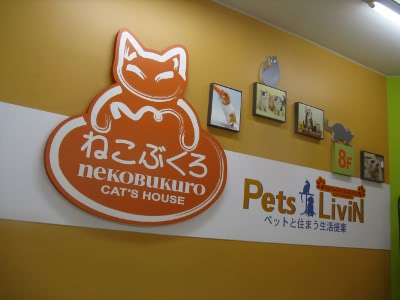 For 600 円 (around $7) you can spend as much time as you want patting, playing with and hassling the 10-15 cats roaming around a three-room cat jungle-gym. Sounds amazing doesn't it? Alas, the reality is a little less exciting. The cats fell into two categories - sleeping: 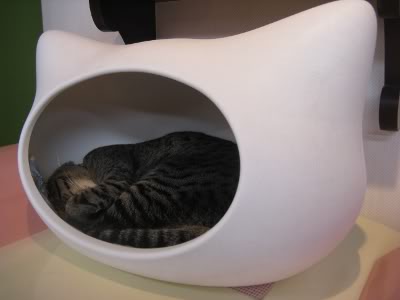 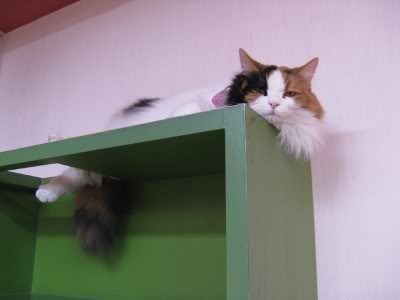 The primary clientele of Nekobukuro are parents and their excited little kids, who run madly around grabbing handfuls of kitty's tail or 'patting' them with a little too much enthusiasm. Thus the cats that have the energy hide - either up high or down low. 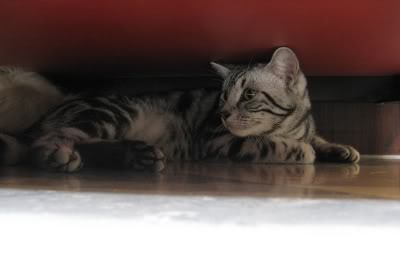 They're still cute, and you can at least pat some of the lazy sleeping ones, but the whole experience was a little odd - I guess they have better lives than the strays we've been seeing everywhere, but it didn't seem like life in the Nekobukuro was a barrel of laughs. The good thing about the morning's cat-based entertainment was that it was inside - overnight Tokyo had turned rainy, and a steady stream came down on us for the rest of the day. 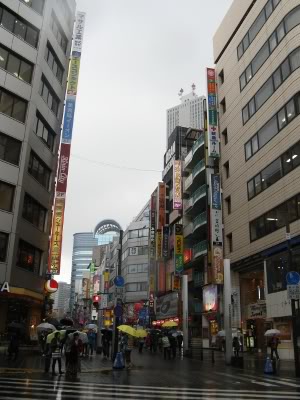 Our next order of business was lunch, and Pure Cafe came highly recommended by the Vegan Pocketguide. A quick train ride to Shibuya and we were ready to walk through the rain to Omote Sando and track it down. 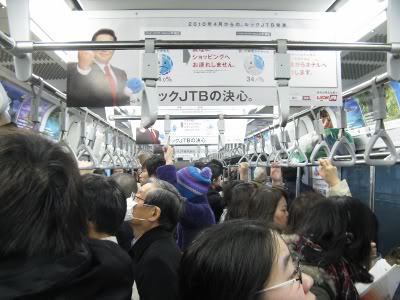 Alas it wasn't to be. Despite managing the hardest part - getting us to the Omote Sando subway stop which was the reference point for our Pure Cafe map - I then spent a good 45 minutes thinking we were facing at 90 degrees from the direction we were actually facing. In this situation, a fairly undetailed little map is very, very frustrating. By the end I was convinced that the Pocketguide had completely misled us. A quick scan of one of the very helpful neighbourhood maps by the side of the road put me straight - I'm just an idiot. Once we had ourselves all turned around, we located Pure Cafe in about 90 seconds. Unfortunately it was too late to grab lunch - we had a meeting scheduled with Matt at another subway station in less than twenty minutes.
We arrived at Roppongi and shamefacedly explained our failure. Matt quickly located a Mos Burger, which Lisa had recommended to us before we left - they've got one vegan burger, a weird vegie patty squished between two rice cakes (250 円, $3). 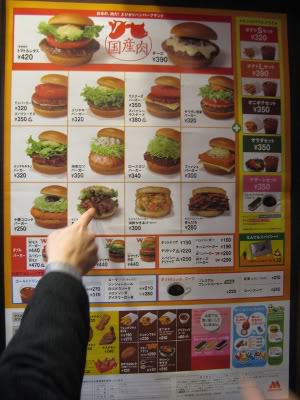 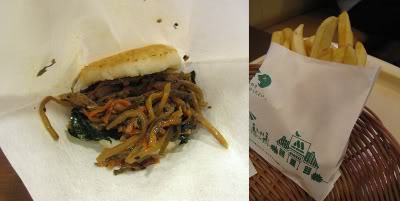 The burger was okay - a bit of a let-down after the high hopes we had for Pure Cafe, but quick and filling in an emergency lunch situation.
Our reason for visiting Roppongi was another rainy day activity: the Mori Art Museum. The major exhibition was called 'Can there be art?', and featured young Japanese artists - mostly working with installations or multimedia. I enjoyed a lot of it, particularly these tiny trees cut out of retail packaging: 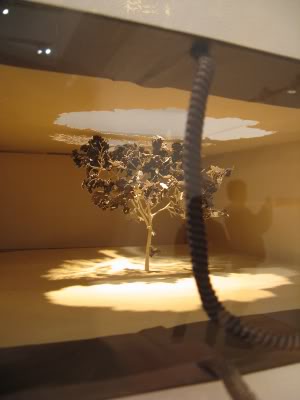 and the crazy sound installations with moving parts and flashing lights, all controlled by a few turntables and some fancy circuitry: 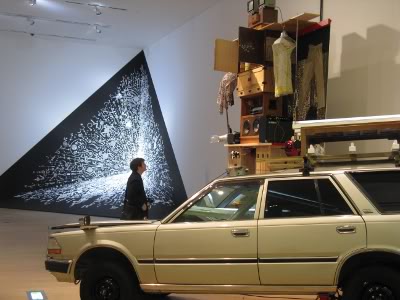 The Mori Art Museum is on the 53rd floor of the Roppongi Hills complex and included in the ticket price to the exhibitions is access to Tokyo City View, an observatory. A rainy night is not the best time to visit, but there were still some pretty striking views across the lit up city. 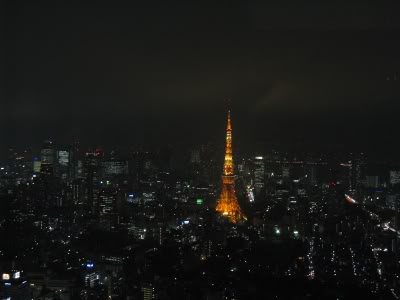 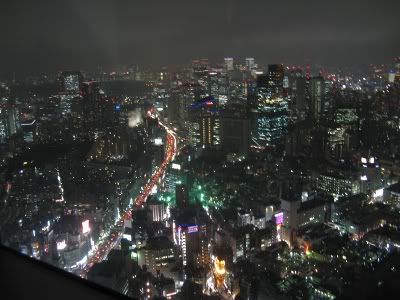 Our final stop for the day was Hiro, for dinner at J's Kitchen, another Pocketguide recommendation. Matt and I spent a lot of time carefully considering our dinner options. 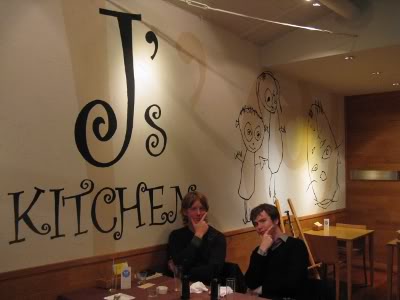 I hit upon the teriyaki tempeh sandwich set (1575 円, $18), a tempeh sandwich, served with salad and a bowl of soup. If you ignore the slightly ludicrous price, this was a cracking choice - the tempeh was saucy and moist, the bread lightly toasted and the salad and soup provided good support. If nothing else, this reinvigorated our enthusiasm to make more tempeh sandwiches when we get back to Australia. Delicious. 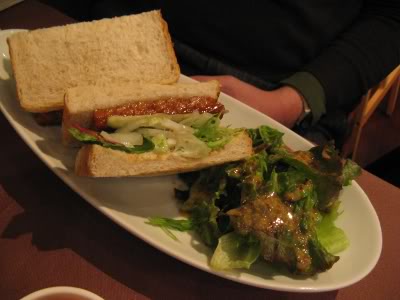 Cindy opted for the even more expensive seitan balls in sweet and sour sauce (1680 円, $20), which were comparatively less exciting. The seitan balls and vegies were beautifully cooked but a lot hinged on the sauce and Cindy wasn't overly enthused by it. She still sampled dessert, a vegan custard tart, that was quite dry and wholesome tasting, with a hint of citrus - it was hardly going to be rich or eggy at a vegan macrobiotic restaurant.

With the rain showing no sign of letting up, there wasn't much to do but catch the subway back to Matt's house. On the walk home we stopped in at the local supermarket - surely one of the highlights of a visit to any new country. 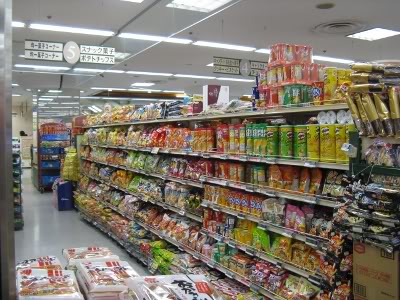 Matt helpfully pointed out a set of mochi-based sweets and some plum liqueur for us to end the night with. The mochi were a bit weird - one had a red-bean based sauce, which is something neither Cindy or I have entirely come around to yet. The other had a sweet and slightly soy-sauce tasting sauce, which was a bit much for me, but has converted Cindy to a slightly crazed mochi-hunter for the rest of the trip. 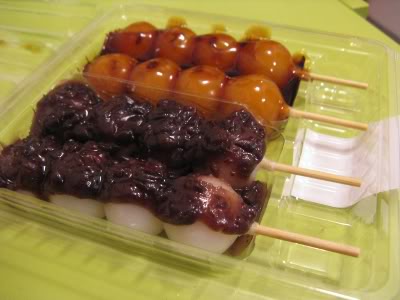 The plum liqueur came in cute little single-serve jars, each with a plum stewing at the bottom. 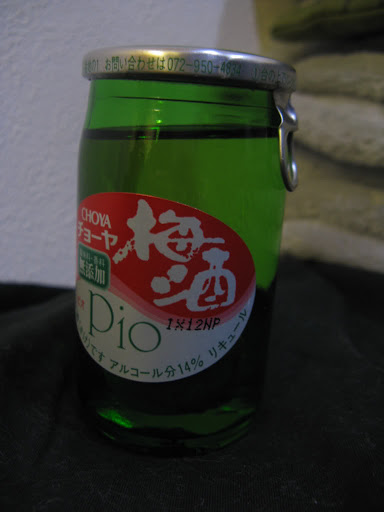 Nothing says 'classy' like a man drinking from a jar. 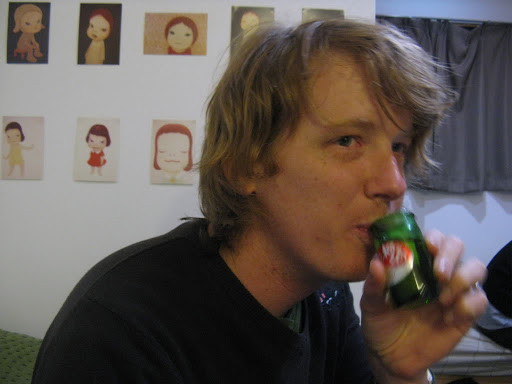