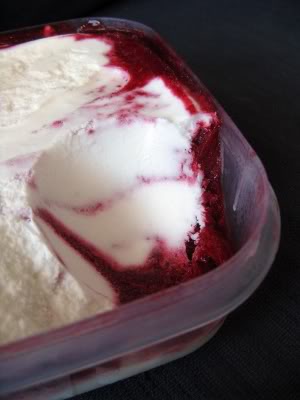 My contribution to the gluten-free picnic potluck was a conciliatory offering to Craig. It was he who hosted the previous potluck picnic and encouraged the bringing of icecream. Then I got all avant garde, making savoury sundaes, and unwittingly chose flavours he detests. So this time I let him set the agenda, and he put coconut and raspberry icecream at the top of the list.
Kristy helped out by passing on the coconut ice cream recipe from The Vegan Scoop. What I ended up doing what quite different but it did confirm that this was another occasion for arrowroot. I stirred the arrowroot into a hot saucepan of sweetened coconut cream and almost immediately had misgivings - it wasn't mixing through evenly, with flecks of well-set coconut cream scattered through the 'custard'. I figured that a bit of judicious sieving should do the job later on, as it always does in my traditional icecream custards.
Matters deteriorated when I pulled the coconut cream out of the fridge later that day. The arrowroot had now set the entire custard into an unattractive, uneven pile of goop. (I wish I had thought to photograph it for you!) There was no way I could push this through a sieve. Michael had the right idea, though - I could strain it if I took to it with the stick blender at the same time! I blended and pushed and poured what I could into the icecream maker, hoping for the best.
What came out can only be described as THE BEST. The best vegan icecream I reckon I've ever made. One of the best icecreams I've made at all. Once its effects had been smoothed out and churned up, the arrowroot gave this icecream a gorgeously fluffy texture. It's like nothing I've previously experienced in a homemade icecream. Even as it melted, the coconut cream retained a frothiness that reminded me eerily of shaving cream. The approach was a little haphazard but I've high motivation to refine it - I'm planning to use this as a base for a few more vegan icecreams.
And the raspberry ripple? It's easy, and it's from this recipe. I doubt you'll find a more vibrantly coloured and flavoured counterpoint to the coconut cream anywhere.

Stir the arrowroot into 1/4 cup of the coconut cream. Heat the remaining coconut cream and the sugar in a medium saucepan, taking them off the heat as soon as they begin to boil. Whisk in the arrowroot mixture. Chill the coconut 'custard' thoroughly.
While the coconut's chilling, make the raspberry ripple. Combine the water, sugar and lemon juice in a small saucepan and bring them to the boil. Simmer until the syrup has reduced by half, then turn off the heat. Blitz it in a food processor with the raspberries until smooth. Strain the syrup to remove the raspberry seeds.
When the coconut custard is very cold, strain it through a sieve, using a stick blender to help it through. Churn the icecream in an icecream maker according to the manufacturer's instructions. Layer the coconut icecream and raspberry ripple in a container. Use a spoon the swirl the two flavours more if you like. Freeze the rippled icecream until firm, at least 4 hours.
Posted by Cindy at 10:20 am