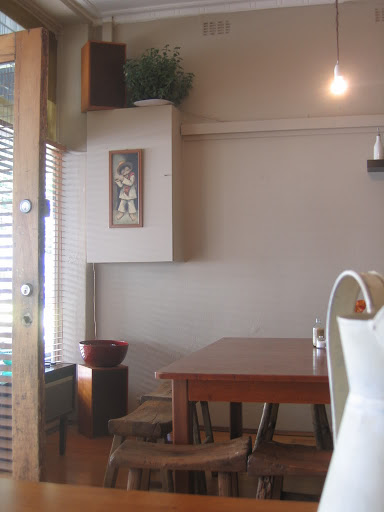 After a busy few days hanging out with Cindy's family, we had the 27th free to amuse ourselves. Our original plan was to spend the day wandering from St Kilda to Brighton, but the sunburn from our day at the MCG meant that the idea of a long walk in the sun seemed like a bad idea. So we opted for a short walk in the sun and a stroll around Fitzroy. Starting with breakfast.

We tracked down this review of Wild Flour bakery on The Breakfast Blog and decided it was worth a visit (particularly since The Commoner doesn't open until 10a.m. and we were hungry at 8). When we got to 422 George Street we were a little confused by what we saw: it was clearly the same basic place as Jamie had visited, with a couple of big communal tables and some tiny outdoor seats, but it didn't seem to be the Wild Flour bakery anymore. Certainly there was a big sign saying 'Wild Flour bread available here', but the name on the door appeared to be Min Lokal (which is Swedish for My Local according to my research). I didn't ask the guy working there what the story was, so I'm still not entirely sure that I've got the name right (after all, google turns up precisely no references to a Min Lokal on George Street in Fitzroy), but in the end it barely matters: the menu looked impressive and the place was open and welcoming.

First, the limitations: they have no freezer, so Cindy had to forgo her desired iced coffee, no real sweet brekkie options (e.g. pancakes, french toast) and their breakfast menu is pretty heavy on the eggs (although there was a haloumi option that was unfortunately unavailable). That aside (and, to be honest, I wanted a proper coffee, like savoury breakfast and love eggs, so I wasn't particularly bothered), the menu looked great: there were a good number of delicious sounding vego egg-based dishes, toast with a variety of intriguing sounding spreads and a smattering of other options. The stars of the show were the claypot egg dishes - basically they're baked eggs, but they're not made in the pans that people complain leave a metallic taste - instead they're baked in claypots, which leaves a slightly mushier texture and no metallic aftertaste.

Three of the four claypot options were vego and, after much agonising, I opted for the napoli eggs with fetta, pesto and pinenuts. It would be hard to overstate how good this dish was - the pesto was amazing, but the modest swirl didn't overwhelm the other flavours. The fetta added a salty tang and the pine nuts gave some crunch to the soft tomato-y egg-mush. It was superb. It left me even more keen to go back and try some of the other claypot varieties (one with artichokes and caper paste in it sounded stupendous). 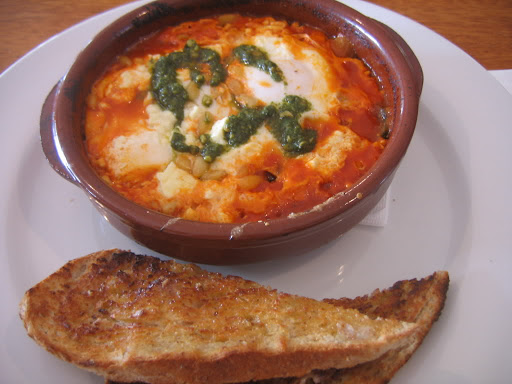 Cindy, hamstrung by the unavailable haloumi dish and lack of other non-egg based choices, settled for the fruit toast. After weighing up her options (fancy jams, some sort of quince paste, a labna-y creation), she settled on maple hazlenut butter. The little dish of nutty butter was small - just enough to cover the two pieces of fruit toast - but delicious. Cindy would have happily smeared twice as much on if she had the option, but was well-satisfied with the delicious toast (I'm not sure if it was Wild Flour bread - a few people came in to buy their loaves and were sent away unsatisfied as the bakery wasn't baking over the Christmas/New Year break) and interesting topping. Now if I can just convince her to return to try some of the other toast toppings I can dig into the rest of their egg varieties. 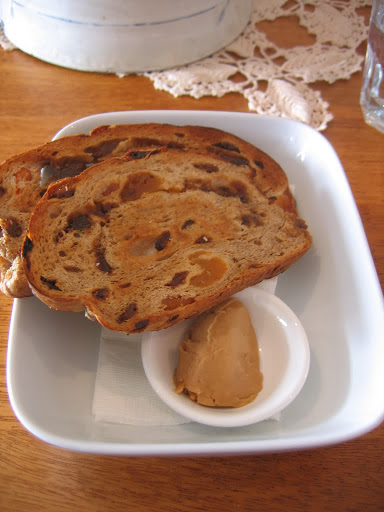