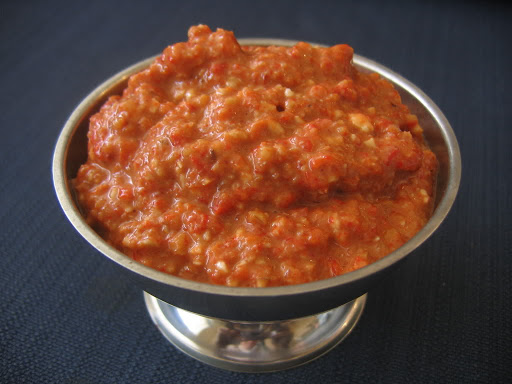 Like Johanna, I recently bought a bottle of pomegranate molasses for the first time. Pomegranate molasses has orbitted my culinary consciousness for quite some time, but for the most part I was content not to own this specialty ingredient. I wasn't convinced that I'd use it much or particularly like the taste. Then I saw Clotilde's recipe for muhammara, a Middle Eastern spread. This mixture of roasted red capsicum and walnuts looked like the star of a few excellent bread-and-dip plates I've ordered out. She suggested that balsamic vinegar, which I already had, would make a suitable substitute but all of a sudden pomegranate molasses had taken on an aura of irreplacability, as if it must be the secret ingredient on those dip platters.
And far from disappointing me, my experimental taste from the bottle confirmed that this was my kind of syrup. Sweet and languidly viscous, but with a very fruity tang. Balsamic vinegar would do, sure, but the molasses fills out the flavour of this spread perfectly to my taste. The dip is sweet and savoury simultaneously, with a texture that's smooth and wholesomely nutty in turn. 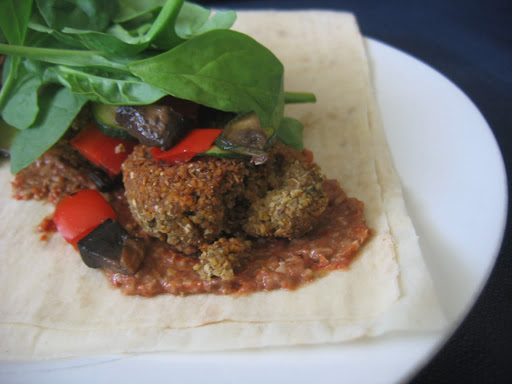 We ate the muhammara in wraps with felafel and veges. Its moist sweetness worked well against the sour edge of the packet-mix felafel. A few days later I made a batch of vanilla icecream based on this recipe and tried swirling the pomegranate molasses through. It sunk to the bottom instead of remaining suspended, but the flavours really worked! So pour it on some good vanilla icecream and fruits - we chose blueberries, strawberries and blackberries.

The muhammara recipe is available here.
Posted by Cindy at 2:42 pm