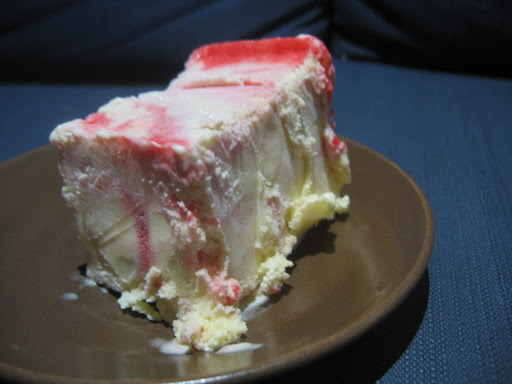 'Tis the season for berries and icecream, and I found just the recipe to celebrate on A Cracking Good Egg. It's raspberry ripple at its best. The vanilla custard is thick, sweet and contains whole eggs so it doesn't leave any whites in my fridge to stare at me for a week afterwards. (I don't have the courage to utilise my aging egg whites for this...) The raspberry syrup is luridly hued and as tart as the real fruit that goes into it, the perfect counterpoint to the rich vanilla. I shared it with Michael, Mike and Jo-Lyn after our meal at Blue Corn, receiving repeated oohs and aahs.
I'll be making this again, if not to win more friends and influence people, then certainly to perfect my swirling technique!
Raspberry Ripple Icecream

In a saucepan over low to medium heat, bring the milk not quite to the boil and then set aside. Whisk together the eggs, 120g of the sugar and vanilla, then add the hot milk, still whisking.
Put the mixture back on low heat, whisking, until it thickens a little. Turn off the heat and add the cream, still whisking continually. Cool the mixture and then store it in the fridge until completely cold, at least an hour.
In a small saucepan over low heat, combine the water, remaining sugar and lemon juice and bring to the boil. Simmer until it has reduced by half, then turn off the heat. Blitz it in a food processor with the raspberries until smooth. Strain the syrup and refrigerate.
Retrieve the vanilla custard from the fridge and strain it - there may be a few solidified egg bits if you're a lazy custard-stirrer like me. Churn the custard in an icecream maker according to the manufacturer's instructions. Transfer the vanilla icecream to a container a quarter at a time, swirling through some raspberry puree in between. Freeze for several hours until firm.
Posted by Cindy at 2:33 pm