Michael mentioned in his previous post that I got my ears pierced on Saturday, and that can only mean one thing...
It's my birthday! And I'm 10 years old!

Well, it's half true. What my birthday really means is that it's time to pull out the credit card and eat something fancy. This year I chose Interlude at the venue. What initially attracted me to Interlude was their 5-course dessert degustation menu - I like a restaurant that values the sweeter side as much as I do. Then, while browsing their website, I noticed that Interlude offers a vegetarian version of their 7 and 11 course menus (though presumably not the full 16-course tour). It would be unfair of me not to try some savouries as well, right? It was with this sense of duty *cough* that we ordered the intermediate vegetarian tour.

Michael also ordered matching wines for himself - even though it was my night, I really can't enjoy the food to its fullest with that volume of alcohol. Regardless, the sommelier generously brought out two glasses with each wine so that I could have a small (and sometimes not-so-small!) taste.

The quality of these photos (and potentially my descriptions) diminishes as the night goes on. Apologies in advance... 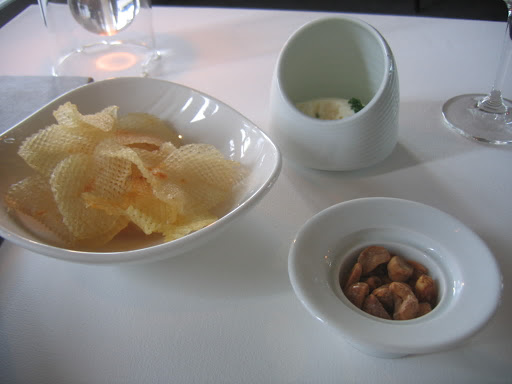 The first nibbles to arrive were deeply roasted salt and vinegar beer nuts, and a dish of housemade crisps with salt and vinegar foam. Chips! Just the thing to set me at ease. I must admit that they didn't win me over on their own - they were intentionally unseasoned and the texture reminded me of uncooked pasta. But with the intensely flavoured but light-as-air foam they were great. 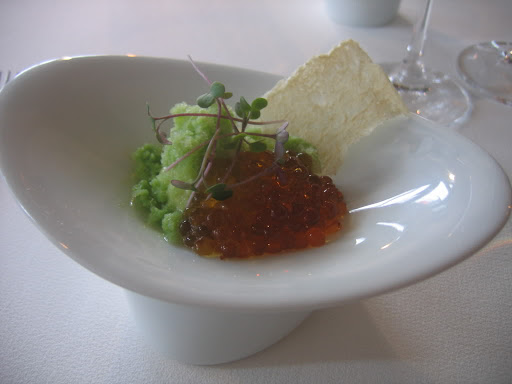 This is a "cucumber sandwich": freezing cold and distinctly cucumber sorbet with a wafer, Pimms caviar and a garnish of watercress. Troubled by the inclusion of caviar on a vegetarian blog? No animals were harmed in the making of this product. Pimms was meted out using a pipette and subjected to a calcium chloride solution (read more about it here), creating solid little spheres with a liquid centre. Served with champagne, it was the taste of a genteel British summer served with entirely new temperatures and textures. 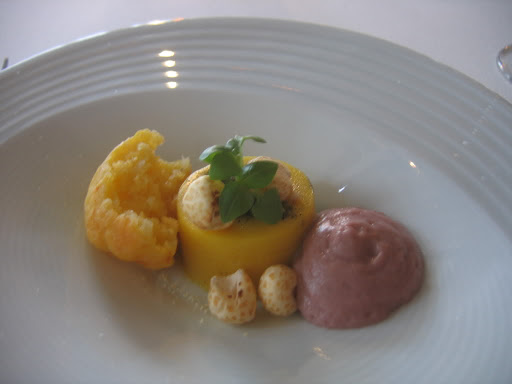 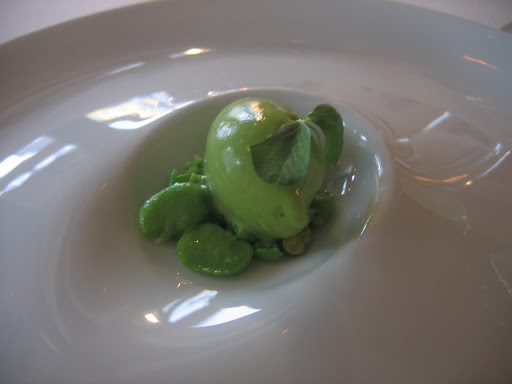 Interlude's usual "pea and ham" became just "pea" for the meat-free guests. Members of the pea family were served roasted and crisp and as a sorbet. This sorbet really did evoke the frozen peas of my childhood and unluckily for Interlude, they were my most hated vegetable at that time. The crunchy roasted ones were much more akin to the fresh ones I'm learning to love as an adult. But if we're gonna riff on Australia's favourite side veges, I'll have the corn. 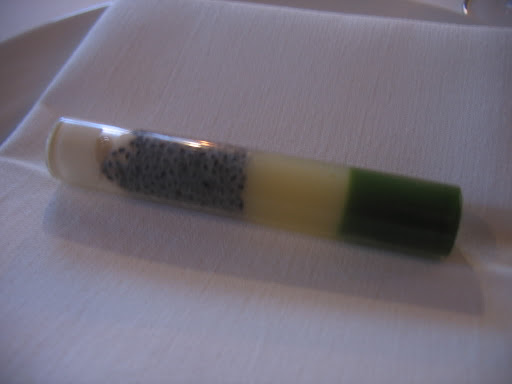 Earlier this year, Ed from Tomato brought the Interlude tube to my attention. ("Somewhere between... sucking on a crack pipe and a cock.") Given that it contained herring roe I assumed it was out for us but I was cheered to see it turn up on our table slightly altered - we slurped up cauliflower puree, bergamont basil (?), apple and chervil. Like Ed I wasn't sure that I could fit it all in my mouth at once but I did, in three staccato sucks. It was just gelatinous enough cling to the open-ended glass tube but soft in the mouth, with all the sweet and herbal flavours holding their own against the others.

And then came the bread and butter. We were offered slices of walnut & fig, green olive white sourdough, and raisin & fennel slices and left with curls of unsalted sheep's milk and salted cow's milk butters. All were fabulous, of course, but I restricted myself to one slice all night. I only had one stomach to store this parade of food in! 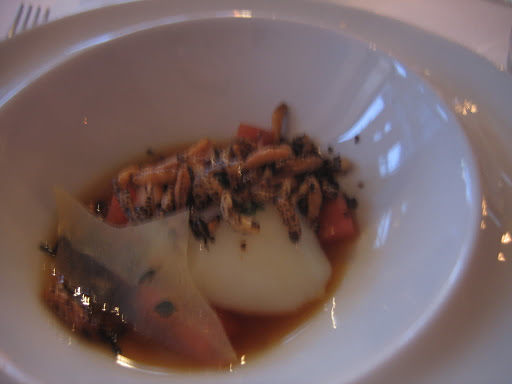 Yeesh, this is where the photos really take a dive. Interlude's signature dish of "bacon and eggs" became eggs with a white onion consomme. The egg is poached in the shell at the low temperature of 65 degrees for about 2 hours. The yolk is still liquid and spills its richness into the consomme when you delve in. Puffed rice and a garlic wafer provided some crunch, though the fragile (pungent) wafer melted on impact with my mouth. (It bore a striking resemblance to the dehydrated garlic that so impressed us at 3, 1, 2.) Funnily enough, I have textural problems with eggs and onions, and this dish overcame 75% of them. The egg still had me a bit squeamish.

Here's the "tomato explosion". I think this is a small pasta shell filled with liquified tomato. The object is to put it into your mouth whole and get a burst of juice. Tomatoes are Michael's pet textural hate and he really dug this seed and flesh-free version. For me, I get at least this much enjoyment out of a cherry tomato. 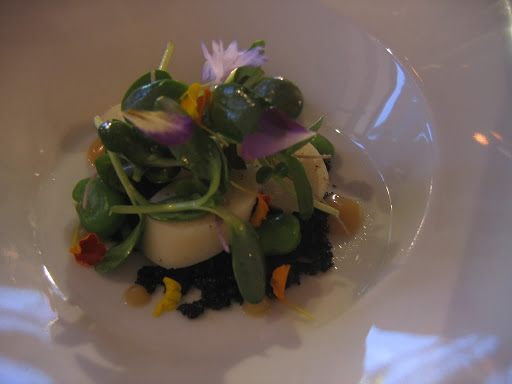 The "garden salad" was just beautiful. Yes, spring is green leaves and flowers but this dish digs deeper. Below the pretty colours are earthier mushroom "snails" and "soil". We couldn't fathom what the crunchy dark soil could be, and our waiter explained that it's brioche, cooked to a crumbling crisp in scandalous amounts of butter, with some black food colouring. 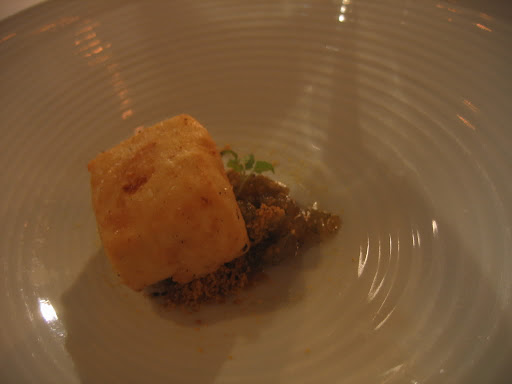 This plate actually travelled to our table with what looked like a little goldfish bowl sitting upturned on it. It was trapping the vapours of our eucalyptus smoked handmade silken tofu, with fennel marmalade. The aroma took me straight back to our previous weekend in the Grampians! As at 3, 1, 2, these guys have perfected the technique of coating the silkiest cube of tofu in a crisp but featherlight crumb coating. Eucalyptus and fennel were a surprisingly good but bitter pair, with the marmalade preparation of the fennel offering a counteracting sweetness. 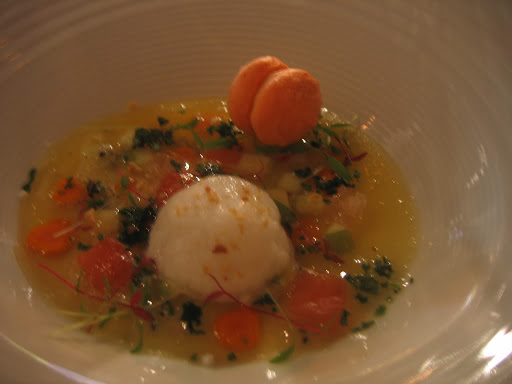 This is "escabeche jelly, beer foam, carrot macaron". The waiter explained that escabeche is a Spanish vinegar-based marinade for fish and in spite of the name, I was surprised when I dipped my spoon in and hit solid jelly! An acidic, savoury jelly dotted with fresh herbs and veges. I clumsily destroyed my beer foam with a spoon so didn't really taste it properly, while Michael thought that garnishing anything with the head off a drink was a bit pointless. The tiny macaron was from another planet than Duncan's - contrary to most of the dishes here, it emulated the looks but little of the texture and nothing of the taste. I noticed another table receiving this dish later in the evening, topped with smoked eel. 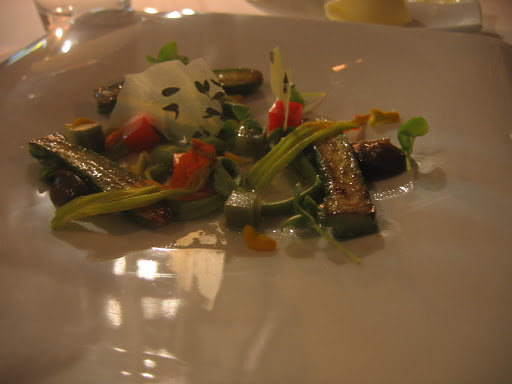 The final savoury dish was a ratatouille. Here was a selection of roasted vegetables with jalapeno jelly and eggplant puree. They were tasty, of course, with the super-smoky eggplant puree the standout. For non-vegos, the ratatouille is served with lamb. 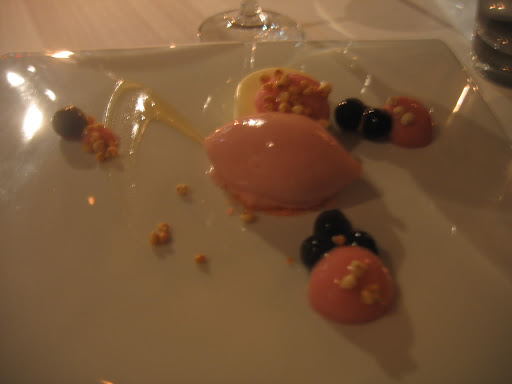 Here are "peaches and jasmine" with a little surprise, promised the waiter. What you see is a tangy, airy peach sorbet and foam, tapioca pearls, puffed millet, and a dense disc of jasmine parfait. What you don't see lies under the sorbet. Michael giggled - "it's going crazy in my mouth!". Powdered pop rocks! In spite of the sophisticated jasmine, my image of this dish is of childish fun, all pink and white bubbles crackling in the mouth. 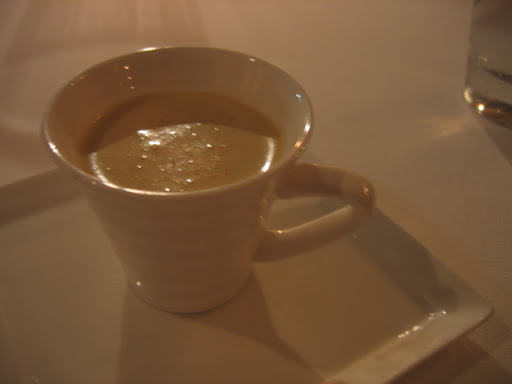 Here's a little cup of egg nog, simultaneously seasonal and completely unseasonal (thanks to the northern hemisphere for giving us such a skewed idea of Christmas). It was frothy, it was subtly spiced and it was sweet, but mostly it was super rich and alcoholic. It transformed a soothing drink into the most intensely delicious version of that drink possible, like 3, 1, 2 did for pumpkin soup. (And if the secret ingredient in either case is just butter, I don't want to know.) 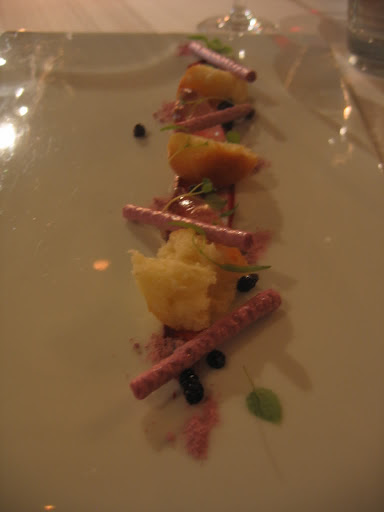 I wasn't concentrating enough on the identity of this dessert, but based on the website I'd assume it's "cassis, broken savarin, tonic water". If you're still confused (I clearly was, 'cause I couldn't write it down), cassis is black currant and savarin is a rich yeast cake. It seemed kind of insubstantial when I started, but by the time I was at the other end of this dessert line, I was saturated with the dark sweet flavour of the black currants. I think the airy crunchy pink sticks were meringue, and the wisps of green (an unidentified herb) were unexpectedly just the thing to perk up the picture (and the flavour). 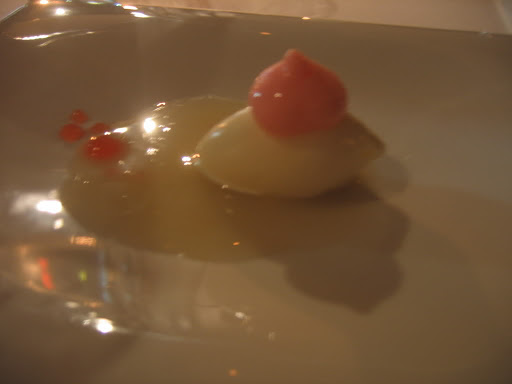 Here comes the palate cleanser: eucalyptus sorbet, lychee consomme, grapefruit. The consomme was heavenly, and frustrating to get onto my spoon from such a flat plate. The sorbet sure did cleanse, but I wasn't sold on it. Once the image of eating Vicks Vaporub with a spoon entered my head, it just wouldn't leave. Michael was more into it. 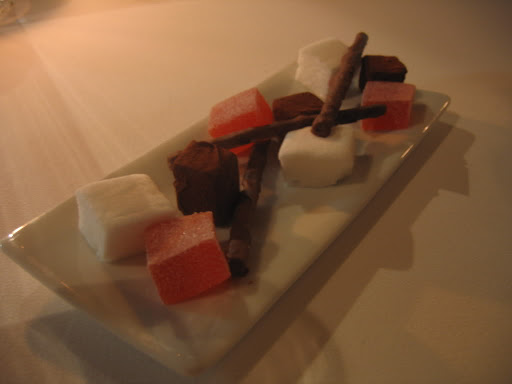 Michael was up for coffee, and with it came these petit fours: malibu marshmallows, red capsicum jellies, salt and vinegar chocolate sticks and ganache infused with Earl Grey tea. I was so full I could barely nibble at these: the red capsicum jelly really worked, the chocolate, salt and vinegar didn't quite fuse, and the ganache was subtle but excellent. I couldn't face a marshmallow. Ultimately, dinner usurped dessert.
It's a shame that a number of the vegetarian dishes are simply the standard dishes with the meat removed. Most obviously, the ratatouille seemed a strange climax without the lamb; unlike our degustation at 3, 1, 2 I didn't get that sense of build-up as we ate through the savoury dishes.
On reflection, it's obvious that a huge amount of work and technical skill was required to create a menu such as this. But what was more obvious while I was eating was the sense of fun and play, and the element of surprise. This is novelty food. As such, I don't have a huge desire to return. (I'm much more curious as to what might feature on Andrew McConnell's vegetarian summer menu.) But it was tasty, it was fun, and it was worth doing - I just hope I haven't spoiled it for you, or for the winner of this year's Menu for Hope Interlude voucher.

Full disclosure: A little over half way through the meal, one of the floor staff gave me a big smile and asked, "So, are you a blogger?" It's true that I wasn't being particularly secretive in my note- and picture-taking, but it was still a surprise. Turns out she's a friend of Ed's. As Ed has already noted, the folks at Interlude are very blog-friendly and they were all happy for our interest, two of the staff asking the name of our blog. But the service was nothing short of fantastic and friendly beforehand and we (Michael) paid for our meal in full, so we have no reason to believe that any other customer wouldn't receive the same service that we did. If anything, it affected our behaviour, ramping up the self-consciousness a notch. So read into this account what you will.

Edit 13/11/08: Interlude closed its doors on October 25 this year. Apparently these folks are planning something new to open in the city; check their website for more news and information.