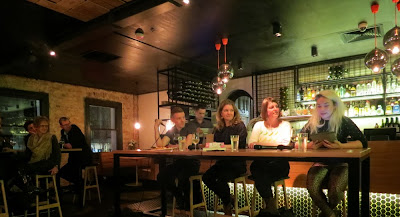 Michael and I threw ourselves whole-heartedly into the Melbourne Writers Festival these past 10 days, attending all sorts of sessions - dress memoirs, life anti-hacks, TV tapings and queer commentaries among them. I was especially drawn to the food-themed events, turning up at four of those alone.


On the first Saturday I listened to American food writer Ruth Reichl. She seemed completely at ease on stage, with a warm, playful and occasionally passionate manner. Reichl was motivated to develop a discerning taste at a very young age, as her mother was an untalented and occasionally dangerous cook. In spite of this setting, she grew to love rather than fear food and went on to strike a deal for her first cookbook at just 21 years of age. She's been writing about food for decades since, working at Gourmet magazine in its heyday of extensive recipe testing and 10 onsite cooks. Seeking anonymity in her restaurant reviewing, Reichl developed an elaborate range of disguises and characters (even impersonating her own mother!) and these ultimately led to her recent foray into fiction. A newcomer to her work, I was as enthralled with Ruth Reichl's life story as any of the more clued-up fangirls in the audience.


Just half an hour later I slipped into a session on Crowdsourced Criticism featuring Lorraine Elliott (aka Not Quite Nigella), Tresna Lee of Yelp, and freelance food writer Dani Valent. The obligatory initial discussion of defamation gave way to some more interesting reflections on the unique opportunities of social media (e.g. conversations that include business owners) and challenges of providing rigorous critique.


On Monday night it was my turn to step up, joining a panel on Australian Fine Dining with Ronnie Scott and Andrea Frost (pictured above). Estelle Tang was our friendly and funny moderator, teasing this blog's "fancy schmancy" tag one moment and rightfully schooling us all on fair working wages the next. Ronnie and Andrea were clever co-panelists and I did my best to keep up. While we all agreed that food can be art, I think the session proved that we have as much affection for everyday eating as the posh stuff - Andrea's book really cuts away the pomp around wine culture, and Ronnie confessed to eating Pizza Hut for lunch.


Two nights later I returned to the Duke for a session on Food Ethics. This time Leanne Clancey MCed a panel comprising farmer Tammi Jonas, Sustainable Table's Cassie Duncan and sustainable designer Ewan McEoin. They highlighted the Aussie demand for cheap food; McEoin astutely pointed out that if it's cheap for us to buy, the cost is probably borne elsewhere - by the environment, by the farmed animals and by our fellow humans on the supply chain. The panel also discussed solutions, from long-term overarching structures to everyday actions. Their ideal is to shorten the string of transactions between food grower and food eater and Jonas boldly challenged the audience to make a difference by immediately ceasing to eat chicken from suppliers they don't know personally.


It's been wonderful to hear from some of Victoria's more thoughtful eaters during the festival (plus a couple of out-of-town guests) - credit goes to festival director Lisa Dempster and especially the Thinking & Drinking convenor Yasmeen Richards for seeking out such diverse opinions and styles.
____________


I received free entry into Ruth Reichl's Delicious, Crowdsourced Criticism and a number of other Melbourne Writers Festival events as a participating artist of the festival. I will likely be paid a fee for my contribution to the Australian Fine Dining panel. I paid full-price entry to the Food Ethics panel.