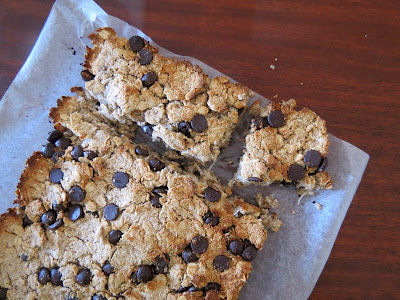 I've been valiantly snacking on all the bananas that arrive here by vege box, but the most recent cohort were a particular challenge - they numbered a dozen and were all destined to ripen at precisely the same time. This called for some serious baking. Not just subbing an egg in a vegan cake, or even a standard banana bread; no, I needed Clotilde Dusoulier's four-banana breakfast slice.


With a couple of substitutions - coconut flour instead of almond flour, peanut butter instead of almond butter - I found that I had everything I needed right at home. It all mixed together into a thick dough with little fuss and baked in precisely the directed time. It's simultaneously kind of banana-gooey in the middle and crispy-oaty on the outside, and impossible to slice neatly.


Bananas and coconut and chocolate go well together, but I found that the flavour here was lacking a little oomph. The sweetness is very understated, and I wonder if some dried fruit might do the trick. Alternatively I'd consider swapping out one of the bananas for some extra peanut butter. I'm at some risk of just converting it into this other slice recipe, but I reckon it's worth persevering. There's the foundation of a fine everyday snack, not to mention a banana-buster, here.


Preheat an oven to 180°C and line a small baking tray with paper.


In a medium mixing bowl, stir together the rolled oats, coconut flour, shredded coconut and salt.


Peel the bananas and drop them into a large mixing bowl. Mash them thoroughly with a potato masher or fork. Whisk in the peanut butter and vanilla. Pour in the dry ingredients from the medium bowl and mix well. Fold in the chocolate chips.


Tip the mixture into the baking tray and use the back of a spoon to even it out. Bake the slice for around 25 minutes, until it's golden brown around the edges. Let it cool completely before slicing.
Posted by Cindy at 9:31 pm