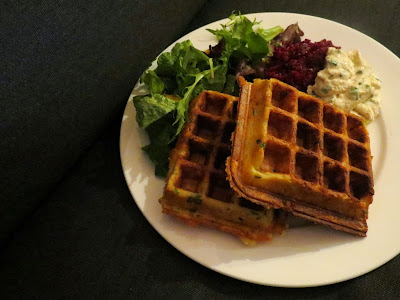 I worked from home on Monday, and it gave me a little extra time for housekeeping around my report-writing; slow cooking a big batch of stock, picking up a few groceries, and preparing dinner in stages. It was a nice opportunity to pull out my copy of Veganissimo, mixing and matching dishes with the vestiges of our vege box.


Look, it was mostly an excuse to make the potato waffles again. I think they're terrific - crisp around the edges and fluffy inside, but not greasy like a hash brown. A lot of parsley and a little chickpea flour set the savoury tone. I'd highly recommend them to anyone with a waffle iron (and suggest that anyone without try frying this batter as pancakes and report back).


To round out the meal and use up my veges, I whipped up small batches of Veganissimo's chunky beet dip and chive and cashew creme cheese. I couldn't believe how easy it was to handle pre-baked beetroots compared to peeling and grating raw ones, and their sweetness really gets to shine here - there's no filler, just some onion and garlic sauteed with red wine vinegar and a piquant dose of white pepper to add some complexity.


The chive and cashew creme cheese took me by surprise too. I've been around the mock-cheese block a few times, and this one uses ingredients I'm familiar with, but there's something deeply right about the quantities that Leigh Drew sets out in this recipe. I'm not going to give it (or the beetroot dip recipe) away here - grab the book and try 'em for yourself.


I'll share the potato waffle recipe (very slightly adapted below) as a taster. We previously ate these waffles with the Veganissimo scrambled tofu, yet another tasty reason to acquire this cookbook for yourself.


Scrub the potatoes and place them in a medium-sized saucepan. Cover them with water and boil them until they're cooked through but still reasonably firm, about 8-10 minutes. Drain the potatoes and set them aside to cool.


When the potatoes are cool enough to handle, grate them into a large bowl. It's fine to let the skins in, though I fished out a couple of larger pieces. Stir in the parsley, chickpea flour, plain flour and baking powder. Once the potato is well coated in the dry ingredients, add the oil and milk and stir well to combine.


Heat up a waffle iron and grease it as necessary. Pour in and cook the potato batter in batches, until the waffles are golden and crispy on the outside.
Posted by Cindy at 7:34 am