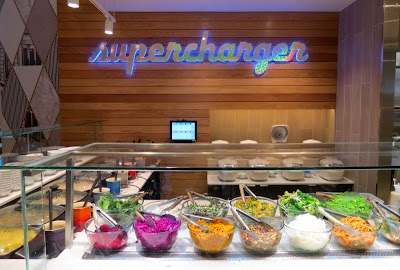 We've been more baffled than enticed by the new Emporium shopping complex in the city, but news of a vegan eatery on facebook managed to draw us in. Supercharger lacks an online presence of its own for the moment but owner Paul Mathis helped us out on twitter, informing us that they're open until 7pm every day and through until 9pm Thursdays and Fridays. That gave us plenty of opportunity to sneak in for dinner before a movie.


Once you find it IRL (tucked behind Jimmy Grants on level 3), the Supercharger MO is clear - fresh mix'n'match vegan bowls, beverages and desserts. Though there isn't clear dietary labelling, each dish's name is pretty instructive and almost everything looked to be gluten-free. Bowls start with a grain or spinach base, and then it's time to choose 3-5 extras ($10-14) - veges served raw, smashed, fermented or simmered. 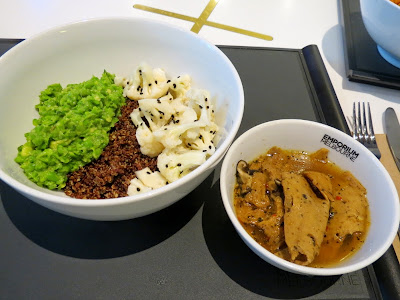 I started with a steamed quinoa base and built up green peas and avocado smashed with lime, coconut oil and mint, some gently fermented cauliflower with black sesame, and thinly sliced seitan braised with shiitake mushrooms. 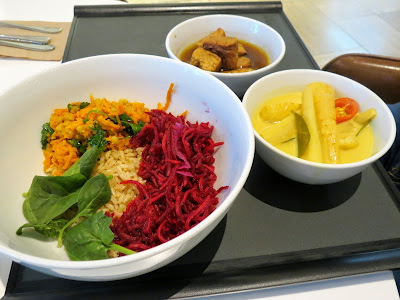 Meanwhile Michael ploughed through steamed brown rice, a raw blend of beetroot, carrot, radish and ginger with Bragg's apple cider, a smash of sweet potato and broccoli with tahini and barley, a yellow parnsip khadi with coconut, turmeric, lemongrass, galangal and lime, plus lightly caramelised tempeh in tamari. 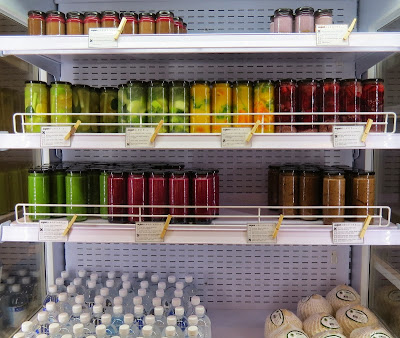 We didn't think we wanted a beverage but the jars of apple, lemon, makrut/kaffir lime and lemongrass ($8) looked too good to miss - this was blended up for us on the spot for maximum impact (... and blended makrut lime leaves do make quite the citrussy impact!). 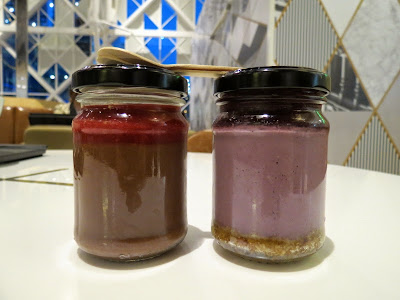 We ordered jars of the two available desserts to takeaway - raw cocoa mousse with coconut agar and berries on top, and a blueberry cashew 'cheesecake' with a jammy top and a date-and-nut base ($5 each). They're definitely some of the smoother, tastier raw desserts around. The jars were great for packing but less easy to eat from, causing sticky fingers and struggles to reach the base (maybe shallower receptacles would work better?).


We were otherwise very impressed by Supercharger. All the food was in rude health even towards the end of their shift, with the colour and crunch of produce just picked. The prices measure up favourably against other bowl-based vego venues around town. When we want a quick meal in the city we typically call on Shandong Mama, but Supercharger will stand out as a fresher alternative.
____________


Accessibility: The entry from Emporium is flat and wide. All ordering options are visible from low counter height; we ordered and paid at this counter. We picked up food from a high bench, though I'm sure accommodations could be made. Toilets are elsewhere in the Emporium complex.
Posted by Cindy at 7:00 am