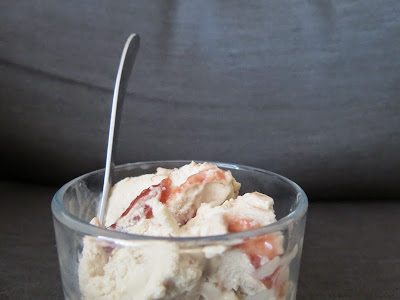 I have temporary custody of  K's The Vegan Scoop cookbook, a nice motivator to clear some freezer space and churn some icecream. This book has all the American standards and extends itself towards the fruits and flavours of Asia and the Caribbean as well. Most of the creamy recipes start with a base of soy milk and soy creamer, which doesn't exactly appeal to me, but I'm happy to play around with other non-dairy milks.


I started out with the peanut butter and flaxseed recipe and a whole lot of curiosity, but it all went into the bin before even reaching the icecream churner. I was willing to go with the way the full cup of ground flaxseeds gelled up the texture but I couldn't countenance their bitterness.


Next I stuck with the peanut butter theme but tried a trustier pairing with American jelly (or berry and rhubarb jam, in my case). This 'custard' whipped to unprecedented heights in my churner, and my anticipation with it. This was a hint it'd freeze pillowy-soft. Strangely it ended up dense and rock-hard, and even given 40 minutes resting time on the bench it's firm and scoops flakily. (That flakiness seems to be the hallmark of coconut cream, which was not in the original recipe.)


This icecream is damn lucky that it tastes good. I'll contemplate a new, improved formulation as I hack my way through it.


In a medium-large saucepan, mix together the coconut cream, almond milk, soy milk, peanut butter and brown sugar over low-medium heat. Bring the mixture to the boil, stirring occasionally. When it's all smooth and well mixed and started boiling, take it off the heat to cool down a little. Stir in the vanilla and salt then refrigerate the mixture until very cold, at least 4 hours.


Churn the peanut butter mixture in an icecream maker according to the manufacturer's instructions. Drop generous spatulas-full of the churned icecream into a plastic storage container and drop teaspoons-full of jam in among the icecream. Freeze the icecream for at least two hours before scooping and serving.
Posted by Cindy at 8:18 am