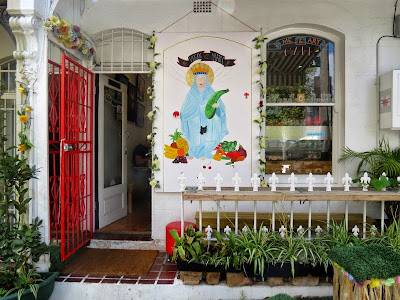 On my Monday morning in Sydney I checked out of my hotel and set off towards the nearest Iku Wholefood for breakfast. Within little more than a block I encountered a terrace house with a painting of the Vegan Mary. Huh! The little coffee shop seemed worth a look.


Inside I encountered a friendly barista who offered me a menu, said something about waffles, and suggested I might like to go and enjoy their back garden. 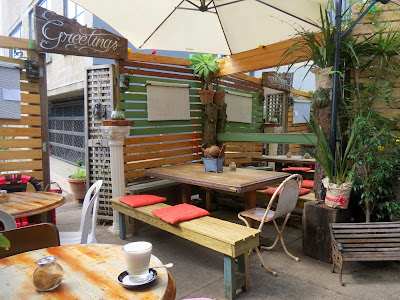 He was absolutely right - the back courtyard had a cute assemblage of tables, plants and knick knacks and was flooded with sunlight. And on a Monday morning I had it all to myself. I settled in with the menu and could barely believe what I saw - almost everything was vegan, with prices centred around a reasonable $10. There was porridge, chia seed porridge, scrambled tofu, smashed avocado four ways, waffles and pancakes (with a gluten-free option!), soup, pies, stews, quiche and salad. 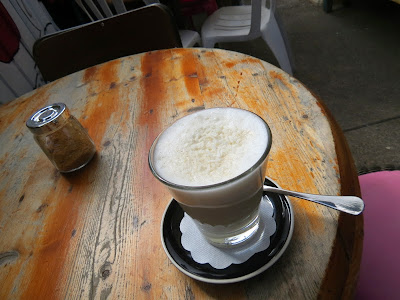 And their house special was apparently a coconut chai latte ($5) - exactly my kind of beverage. In truth this was very light on the tea and spice, but the frothy warm coconut milk went down a treat anyway. 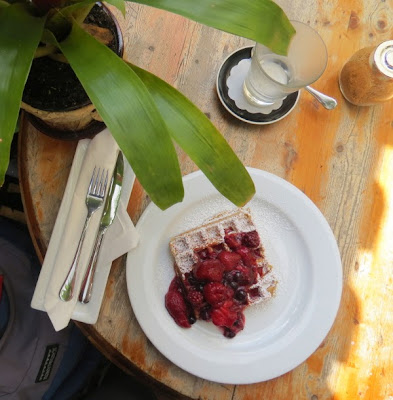 The waffle ($10) was a big 'un, and I ordered it doused in mixed red berries ($2.50). Based on buckwheat and coconut flours, it was nutty and filling yet so soft and cakey that I didn't need a knife to cut it. The berries were thawed from a frozen box, and this rendered them soft and juicy. 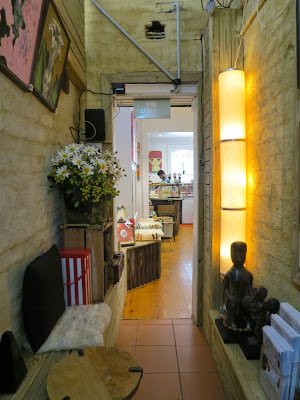 There are assorted benches and stools, more ornaments and a rotating selection of art throughout this cafe, which on leaving I figured out is called Me and Art. I found the staff, the menu and the setting utterly charming, not least because I'd discovered them entirely by accident.


Me & Art has had positive write-ups on Not Quite a Domestic Goddess, Fight the Craving, The 9am Mug and Khana. There's a more mixed reaction on fox and lee.
____________


Accessibility: There are a couple of steps up on entry. The interior is flat with a clear corridor through the centre and a hodge-podge of tables and stools; a unisex toilet is located down a flat hall. Beyond the toilet, down a stair or two, lies the garden - it's crowded with knick knacks and the furniture is even more varied. I could have ordered at the table, and I paid at a high counter on my way out.
Posted by Cindy at 7:43 am