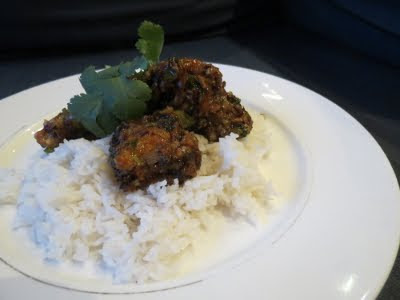 We had a fairly quiet Saturday, a pile of leftover veggie-box stuff that needed using and a hankering for cooking up something new for dinner. The main focus, as it always seems to be, was on using up cabbage. After flipping through a few cookbooks without finding inspiration, we turned to The Asian Vegan Kitchen, picked up from erstwhile veg-blogger Lisa Dempster some time ago. There are more than a dozen cabbage-friendly recipes to choose from within its pages and, feeling ambitious, we opted for the one that required deep frying: Vegetable Manchurian.

If you follow the recipe properly as I did, it ends up taking up a fair bit of your afternoon - taking the lazy option of using bought or pre-prepared stock would make the whole thing a lot simpler, and I'm pretty sure that's what I'll do next time. Otherwise there's just lots of chopping, grating and other bit and bobs, before the final terrifying moment when you drop the little balls into a pot of hot oil. It's all worth it in the end - the veggie balls turned out perfectly, crisp on the outside, a little bit spicy and covered in a delicious glaze of tasty sauce. This isn't a heavily sauced dish, meaning our decision to pair it with plain rice was a bit of a mistake - ideally you'd make some saucy greens or something as well to provide a bit more flavour to the rice. That aside, this was a real success - something we'll be whipping up next time we're trying to impress somebody with our kitchen skills.

Vegetable Manchurian
(based on a recipe from The Asian Vegan Kitchen, by Hema Parekh)

Mash up the ingredients in a mortar and pestle until you've got a mushy paste.

Pop all of the veggie ball ingredients in a big bowl and mix them together thoroughly. Sculpt them into little balls - about the size of squash balls I guess. This was a bit of a struggle - the balls would just barely hold together for me. Don't worry too much - they were fine as soon as they hit the deep fryer! Amazing.

Heat your veggie oil in a saucepan until it's super hot - I'm not sure how you tell, but I let my oil heat up on a medium gas burner for a good 6 or 7 minutes. Once you think it's ready, drop one of the veggie balls in - it should fry like crazy straight away. Deep fry them all, in batches (the size of which will depend on your saucepan - I got five or six going at once in ours). You'll need to flip them over after a minute or so or only one side will crisp up. Drain them on some paper towels and set aside.

Heat the sesame oil in a big saucepan (big enough to fit all the balls in it, you're going to stir them through later on). Add the garlic, chillies, ginger and green onion bits and stir-fry for twenty or thirty seconds, trying not to burn the garlic. Pour in the stock and add the soy sauce, sugar, salt and the cornflour/water mix, and lower the heat a bit. Stir and simmer for about five minutes, until it's thickened up nicely.

Carefully pop the balls in the sauce pot - there should be enough sauce to just coat them all. Stir them around gently to get everything sauced up and then serve, garnishing with coriander leaves. This makes something like 25 balls, which should get you about four meals.
Posted by Michael at 11:34 am