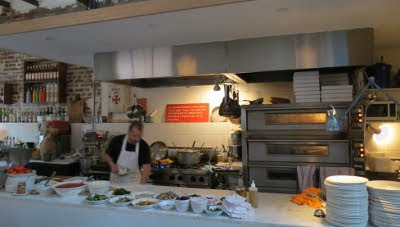 We've long been fans of I Carusi in Brunswick, so when we read that there was a new pizza joint in our neighbourhood run by Pietro Barbagallo (the guy who opened the original I Carusi in 1998), we went straight along to check it out. It's a modest little place, with little in the way of signage or hype, tucked into a small shop off Lincoln Square. They've squeezed in a dozen tables or so, set up an open kitchen and started pumping out the kinds of pizzas that made I Carusi famous. The menu doesn't strike out anywhere particularly groundbreaking - for vegos there's the #26 and the broccoli straight off the I Carusi menu, along with a mushroom pizza, a margerita and the verdura (mozzarella, peppers, eggplant, green olives). They've also got a short pasta list, which includes canneloni and gnocchi for vegos. Vegans are basically out of luck here, as are the gluten-free* - head to Eat Pizza instead! 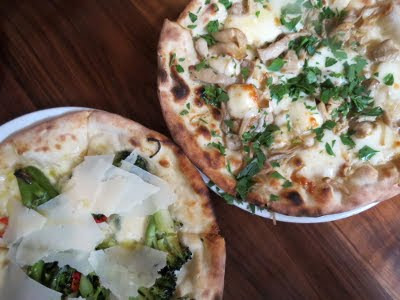 We couldn't resist the broccoli pizza (broccoli, mozzarella, parmesan, chilli, $12). It's exactly the same as the one served up at I Carusi, which is about the highest praise I can offer. We also tried out the Funghi (asiago cheese, enoki and oyster mushrooms, $12). I was relieved to see a vego mushroom pizza on the menu (the I Carusi version combines mushies with prosciutto for some ridiculous reason), but I didn't love this as much as I'd hoped. I mean there was nothing wrong with it, but it paled next to the wonders of the broccoli pizza - I wonder if it was the asiago rather than mozzarella that disappointed me. 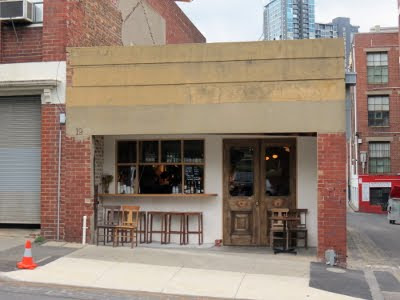 Even without loving the funghi, I left pretty happy - service was friendly and reasonably efficient (although it would make everyone's life easier if they had a drinks list), and the atmosphere was lovely. It's great to have a local rival to DOC, producing high quality pizzas amidst the mediocrity of Lygon Street. Kaprica's low key vibe and affordable prices make it Carlton's standout pizza joint for me, although whether I'll feel the same way once the queues start to build is another matter. Even if they do get popular, I can see Cindy and I spending the odd summer evening with a couple of takeaway pizzas in Lincoln Square (with the possibility of Casa del Gelato for dessert!).

* Thanks to Sammy in the comments for letting us know that some of the pasta can be done gluten-free - take it away coeliacs!
____________

Accessibility: Kaprica has a flat entryway, but is pretty cramped inside. Ordering is at the table, with the bill paid at a lowish counter. We didn't visit the loos.
Posted by Michael at 1:08 pm