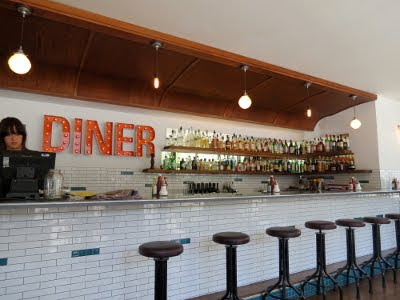 Michael certainly has his finger on the Gertrude St pulse. He not only works in the neighbourhood; he heard about the impending opening of Belle's Diner from his hairdresser down the street. From there it was easy work convincing me to visit a diner, especially when I discovered red velvet waffles on their brunch menu (genius!). The only problem was that they open at 10am - this put paid to a cheeky weekday visit and it's taken us a while to find a brunch-friendly weekend.


We actually arrived closer to 11am in the end and there were plenty of booths available (though they were filling up as noon passed and the menu options expanded). The breakfast menu has just five dishes - granola, those tempting waffles and three egg-based dishes (two of them vegetarian). Vegetarian items are supposedly asterisked but the breakfast list is star-less and then in the lunch section the kale salad includes anchovies and a *. That's -10 points for dietary markings, Belle. Michael's 2 (scrambled) eggs ($12.50) sprawled across toast and home fries. They made for a satisfying plate and he was even more pleased that there was hot sauce on hand. While it's definitely good value, Michael noted that he makes a better hash himself  - he's immodest, but he's probably right. 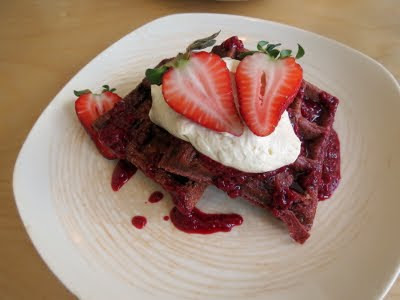 And what of those waffles ($15)? They certainly looked the part - tantalisingly crimson, offset by raspberries, strawberries and vanilla-flecked cream cheese yoghurt. The flavour was good but not great. There was little sweetness to the dish, it was begging for a hint of salt to brighten the flavour, and the topping had none of the tang of cream cheese or yoghurt. Oh, and it was served cold. The raspberries saved it, providing enough sweetness and tartness to spread across the rest.

I liked the casual and understated atmosphere at Belle's Diner, which extended from the staff to the fit-out and the menu. It wasn't pitch-perfect - I wanted the music a bit softer, then the waffles and the special-diet tips kicked up a notch. I'm willing to hear them out at least once more though, because I know several people singing the praises of the fried green tomato burger.
____________


Accessibility: There's a small step in the middle of Belle's Diner, but flat entryways at either end. A corridor through the centre is moderately wide and booths are packed end-to-end for the length of the building. While the booths don't appear particularly wheelchair or pram-friendly, I noticed some fellow diners in the far booth with a(n empty) wheelchair tucked in beside them. We ordered at our table and paid at a high bar and didn't visit the toilets.
Posted by Cindy at 12:46 pm