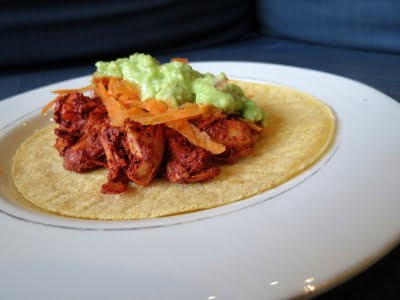 We had a reasonably free Saturday and decided it was really time we made something new for dinner. Cindy's list of potential recipes was massive but the can of jackfruit in our cupboard, the pile of tortillas in our freezer, and the ready accessibility of Casa Iberica soon led us in the direction of these tacos - a Masterchef-inspired recipe veganised by the Wikos.

We made the lazy version - no onion salsa, no homemade tortillas - just the pulled pork filling, some grated carrot and a simple guacamole. And they were great! We've had success with the jackfruit pulled-pork in the past but this is a simpler and faster version, relying heavily on achiote paste (one side of the box says 'annatto' and the other 'achiote', which meant it took me a long time to track it down on the shelves at Casa Iberica). It comes in giant 1kg boxes that cost upwards of $30. The upside: it's tangy and tasty without being ludicrously spicy and it makes putting together vaguely authentic Mexican flavours really simple. The downside: we now have 900g of quite expensive spice paste in our fridge, so if anyone has any great suggestions, hit us up in the comments. 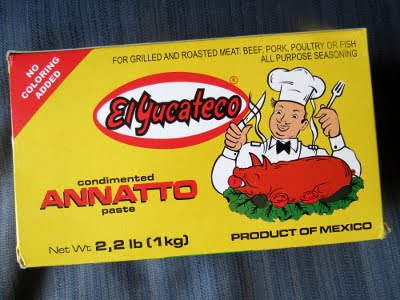 The tacos worked out well - the spicy 'pork' cooled by the carrot and guac and wrapped up in warm corn tortillas (also from Casa Iberica - we really should make our own but these are an excellent and lazy substitute). I'd say we'll go back to the pulled pork recipe again... we'll have to with all of the achiote paste to use up.

Combine the achiote paste, orange juice, garlic and vinegar in a food processor and whiz until you've got a smooth mixture.

Drain the jackfruit and marinate it in the spice paste - we just left it for half an hour or so, but the longer the better I imagine.

Pour the jackfruit and marinade mix into a lightly oiled frying pan and cook on medium heat for about 10 minutes. Stir thoroughly and roughly mush up the jackfruit to turn it into a stringy pulled-pork substitute instead of a half dozen big chunks. Season with salt and pepper.

Serve on top of corn tortillas, with grated carrot and home-made guacamole.
Posted by Michael at 12:08 pm