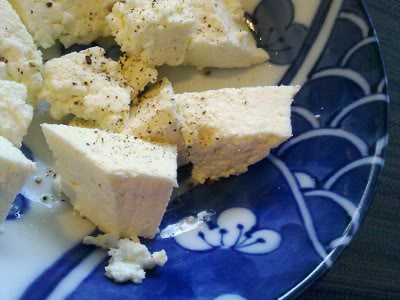 On Sunday afternoon I had my own go at making the paneer I swooned over at Kurma Dasa's cooking class.  I planned it as a welcome-home gesture for Michael (he'd been working out of town for 10 days) and a time-to-stop-scavenging-and-actually-cook motivator for myself.  Not that too much planning seemed necessary - all it takes is milk, some lemon juice or vinegar, and a splash of water.
Oh, how wrong I was.  As I began to heat the milk, I set up my colander over a bowl for the draining stage and rummaged in the drawers for the muslin.  You know, that muslin we used to make tofurkey?  Not in the drawer I expected it to be in.  Nor, seemingly, in any of the other drawers.  Not in the cupboards.  Not in any other place outside the kitchen where I could imagine possibly stashing muslin.
By this stage my milk was threatening to boil over and I just went with it.  I curdled the milk and took a chance on the relatively small holes in my colander, pouring it all through without any finer straining.  And I pretty much got away with it!  There were just a few teeny curds floating in the yellow whey - they were easily strained with my finer tea strainer as I packaged the whey into jars to freeze for later (Kurma has some good ideas for using whey too!).  Then I just popped those escapee curds right back into the colander to be squished with the rest.
I was still a little nervous that my cheese might not compress into a neat slab without a cloth to keep it together.  In the end my paneer was a little crumbly round the edges but completely edible; first dressed with salt, pepper and lemon juice as we tasted it in class, then gently fried into golden cubes for a palak paneer. 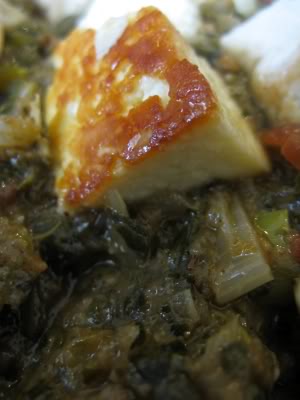 I shared my paneer-straining woes with the twitterverse as my curds drained and received some great tips on substituting for muslin - clean Chux (@crazybrave), a linen tea towel (@tammois) and even 'heavy denier pantyhose' (@stickifingers)!  If only I'd run to the sock drawer instead of the kitchen drawer.

Paneer
(based on a recipe from Kurma Dasa, which appears on his website here)


Set up a colander or sieve in a large bowl and line the colander with muslin or another clean cloth.  If the cloth is very thin, fold it to double thickness.  Also, make sure there's sufficient extra cloth hanging over the edges to fold in later.
Pour enough water into a large saucepan to completely cover the base (perhaps 5mm deep) and add the milk.  (The water, Kurma advised, will prevent the milk from burning and sticking to the bottom of the saucepan.)  Set the milk on a high heat and bring it to the boil, stirring it regularly along the way.
When the milk begins to foam, turn the heat down to low and add the lemon juice.  The milk should split into curds and whey.  Keep stirring the split mixture over the low heat for a few minutes to allow full separation.
Gently pour the curdled milk through the colander, so that the curds are caught in the cloth and the whey drains through into the bowl.  Pull up the sides of the cloth and twist them together, squeezing as much whey out of the cheese as possible.  Set something heavy (e.g. food cans held on an upturned plate) on the cheese for at least an hour to drain as much liquid from the cheese as possible.  When it's ready, gently unwrap the paneer to store or eat as you wish!
Posted by Cindy at 6:04 pm