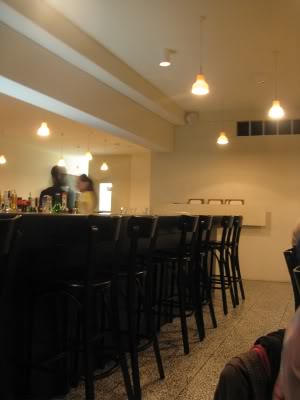 Every month or two a wave of hype sweeps through food bloggers and across twitter as another exciting restaurant opens in Melbourne. In March and April, it was the turn of Supermaxi, the new restaurant run by Rita Macali, one of the people largely responsible for Melbourne's pizza boom with the opening of Ladro (which we've shamefully never reviewed!) on Gertrude Street some years back. With that pedigree it was no surprise that Supermaxi was packing them in from day one.

We took a bit longer to check it out, with Mike and Jo inviting us to join them there for a late celebration ofmy birthday. We booked but on a Thursday night it seemed like you could walk up and get a table if you turned up early enough (especially if your name is Vince Colosimo!) - but by the time we left there wasn't much spare real estate left.

The menu is surprisingly light on vego options - there's a few good dishes in the entree section of the menu and we'd had two particular recommendations from previous visitors: the Cavolfiore di Gigia (deep fried cauliflower in batter, $11) and the battered beetroot ($11).

These were both exceptional - the sweet beetroot and light batter complemented with just a dribble of lemon juice and the tender cauliflower florets with caramelised onion bits taking the Indya bistro idea to a new level. The only downside was the doubling up on the deep-frying - probably you're best off picking one of these to order each time you go rather than going with back-to-back batter.

Once you get past the entrees the vegie fare becomes scarce - just two pizzas and one pasta by default. Cindy went with the ravioli with grilled artichoke, butter and sage ($20). 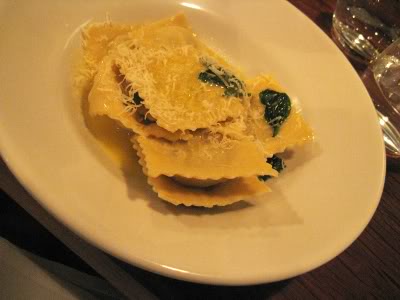 Cindy enjoyed this but not as much as I did - I thought the filling, which had a kind of vinegarry artichoke flavour, was amazing. The pasta was beautifully cooked of course, and the butter sauce was appropriately light.

The vego pizzas on the menu were the margherita and the funghi, but the staff were happy to take the anchovies off the La Napoletana for me (fior di latte, olives, oregano, capers and chilli on a tomato base, $18). 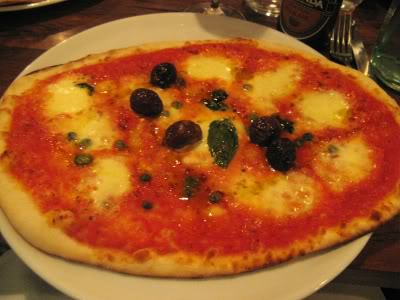 As you'd expect, they make a good pizza base at Supermaxi, and the sauce and cheesiness on this were pretty enjoyable. I was a little disappointed at the sparseness of the toppings - I wasn't expecting a La Porchetta style slathering but five olives and this sparse sprinkling of other bits and pieces seemed a bit light. Maybe the anchovies add some variety. Still, I'm not complaining too much - this was a very enjoyable pizza feast. But maybe not quite up to some of its competitors.

We all had a bit of a chat afterwards, and there was a reasonable consensus - Supermaxi is a good restaurant but it's probably not a good value-for-money restaurant. The service is impeccable and the room is cleanly designed and stylish but it feels like the food falls just a tad short of the price and environment.