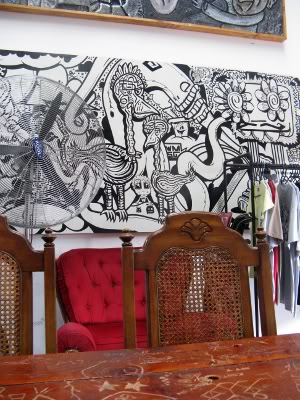 We've raved about Court Jester a couple of times already, having enjoyed their amazing breakfast menu. Each time we visited though, we've regretted being too early to sample their lunch menu, with Cindy particularly eyeing off the rotating cast of pierogi that they offer up.

Finally visiting after 11am, I was still tempted to go back to the Brunswick Green (brekkie is an all day affair here) but instead delved into the unknown wilds of the lunch menu. Lunch is a bit meatier than breakfast, with a Polish pizza, a vegie burger or the pierogi providing the vegetarian choices. Cindy  was thrilled that all 3 pierogi choices for the day were vego: mushroom, potato and cheesy potato. She got a mixed 6, two of each variety, served up with sour cream on top ($7.50). 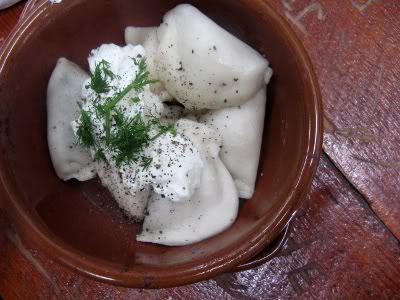 This came out looking like a pretty small lunch, but they're a hearty little dumpling, and Cindy was well satisfied. The dumplings were soft and beautifully cooked, with rich fillings - the potato in particular won rave reviews. Cindy had high hopes, and these did not disappoint.

I decided to sample the vegie burger, which came with salad, pickles, Polish sauce and sour-cream ($9) - I added in a beetroot and carrot salad for an extra $3. 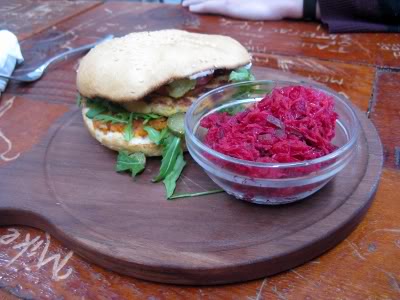 The pattie on the vegie burger was decent enough, but this meal was all about the pickles and sauces - lots of saltiness and bite. Similarly, the beetroot and carrot salad had a hint of pickle about it, making this a delicious Eastern-European lunch. Plenty of food on offer too for just $12.

Cindy decided that, despite finding the pierogi quite filling, there was still some room left for dessert. And when the blackboard promises sour cherry and chocolate torte ($5), you can understand why. 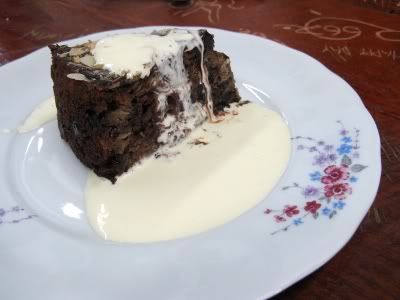 This was rich and filled with chocolate - I only had a little taste, but I thought they could have upped the cherry content a little to give it a bit more variety. Still, there were no complaints from the other side of the table.

Court Jester continues to impress us, with friendly (if slightly scattered) service and well-priced and interesting food in a great space. We're yet to be disappointed - if only it were a little closer we'd be there every week.

Read about our previous visits to Court Jester here and here. Since we last looked, it seems only Green Gourmet Giraffe has blogged it - I was sure that this place would become super hip once Epicure reviewed it, but it seems as though there's still not been a whole lot of blog attention (excluding the little burst that we linked to in our first post).
Posted by Michael at 9:49 am