Since we moved to Melbourne we've been building up a tradition of fancy degustation feasts to celebrate our respective birthdays. People who've been with us for years will remember our gob-smacked enjoyment of Andrew McConnell's old place Three, One, Two way back in 2007 and our follow-up visit in 2008. It's taken us a while to really try out McConnell's new place, Cutler and Co - sure we sampled a cracking lunch last year, and we've breakfasted at his other joint Cumulus Inc, but we hadn't got our act together and tried out a really fancy meal there. So this year I decided to make it my birthday venue.

Unlike Three, One, Two the vegie degustation isn't a standard option - we let them know ahead of time that we were keen and they were more than happy to accommodate us. The degustation is eight courses - six savoury and two sweet - for $100 a pop. 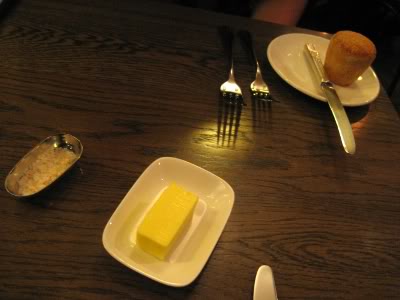 Things started off with the obligatory bread - sourdough this time. It was as delicious as ever, but I think I mostly enjoy the bread at these places because of the licence to smear it with awesome butter and salt.

The first real course was a selection of 4 entrees: 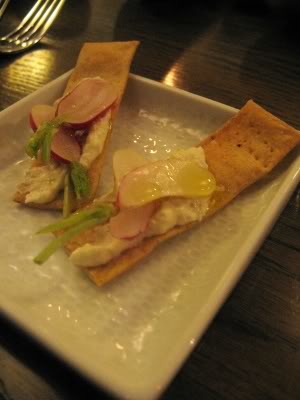 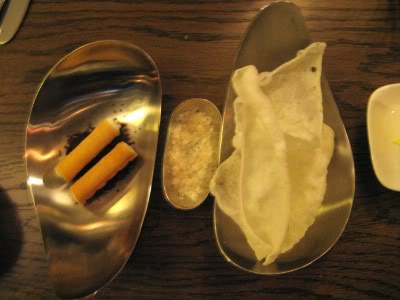 A selection of marinated olives (you'll note that I was too impatient to wait for the photos and there's already a lonely pit sitting there in the pit-bucket. 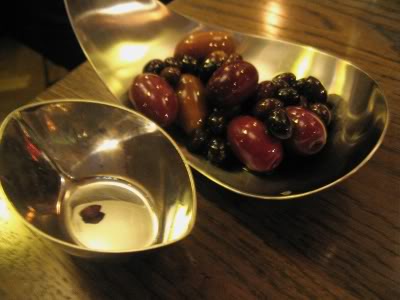 These were all excellent, a cavalcade of flavour and texture - crispness, creaminess, weird powders, tender olives. All very impressive. The undoubted star were the cigars - filled with a wonderfully creamy goat cheese inside these crisp little cylinders, all sitting on a dehydrated olive powder. I would have been happy if these came out with every course.

Instead, we were next served up this little delight: 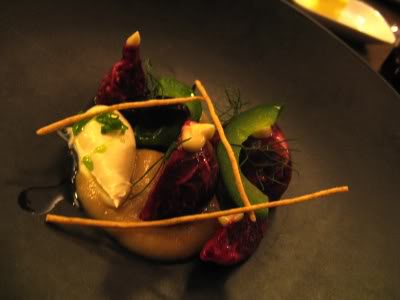 baby beetroot served on creme fraiche and smoked onion ceviche, with rye cracker twigs, dill, little beetroot jelly cubes and fresh green capsicum. The creme fraiche was lightly tangy and impossible smooth, while the beetroot had a sweeter taste than I expected. This was another textural adventure: crunchy crackers, crisp capsicum, jellied beetroot and tender baby beet. The dill was a little overpowering when you big bits of it in a single mouthful but otherwise it worked brilliantly.

Next up was an unphotographed dish (can't even blame booze for this oversight) - a carrot salad with raw, cooked and pickled carrot, with walnut cream and shanklish. This was a cute riff on the carrot theme, with crisp raw carrots, dark and soft cooked carrot and slivers of tart carrot pickle. There were a few more radishes in there as well, along with some pieces of slightly candied walnut and the mild shanklish and walnut cream.

The following dish was probably our pick of the bunch: slippery jack mushrooms, pomme anna and nettle. 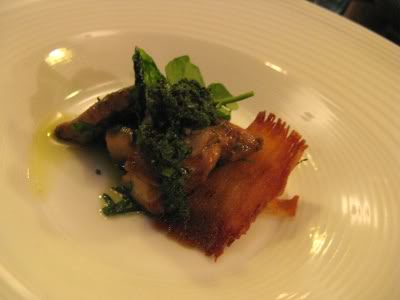 The little parcel of finely sliced and fried potatoes was simply amazing. Most of you will know Cindy's obsession with all things chip-related, and this left her unable to even speak - possibly the potato-highlight of the year. The slippery jacks were their usual odd, slightly squishy texture, but were cooked beautifully and had a mild, buttery flavour. They were served atop a Jerusalem artichoke puree with vanilla and beneath a nettle topping, which was a welcome sight of greenery amongst a plate of fried goodness. But really, this was all about the potato. Stunning.

Things shifted gears again next, going from a hearty fried treat, to something more delicate and stewy - a leek bourride, with fregola, smoked tomato and mustard cream. 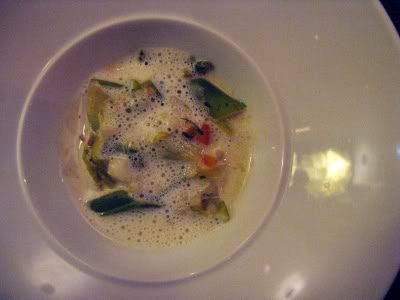 The mustard cream made this dish, with the rest serving almost as vessels for it's creamy goodness. The tiny pasta pieces were a nice textural variation, while the leeks were soft and had soaked in plenty of the glorious mustard cream.

Our last savoury was billed as a kind of main dish, with two plates coming out: a little rectangle of baked ricotta, served with a raw globe artichoke and fennel salad. 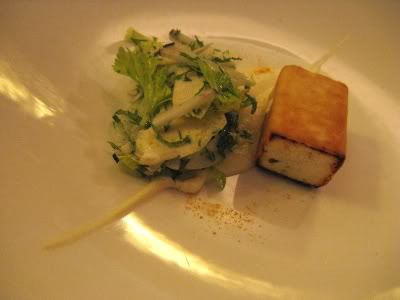 The salad was tart and fresh and the cheese-prism was light and crumbly - Cindy noted that on its own, this plate would make for a great spring entree. But it came with something more seasonally appropriate, this hearty eggplant mush, sprinkled with almonds. 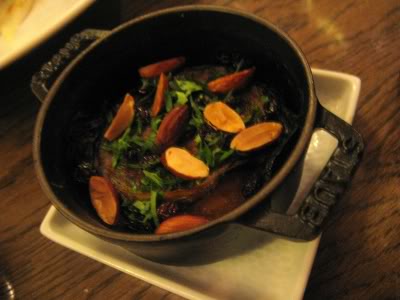 It was warming and hearty, with a nice mix of crispy roasted nuts and soft and gooey eggplant mush. It was also filling - at this stage we were both glad that it was time to move on to dessert.

First up was a mandarin and carrot granita, served with sheep's milk yoghurt. 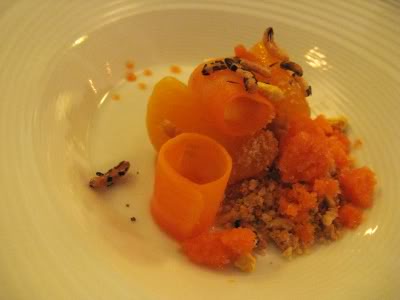 This was better than either of us expected - the fine cylinders of raw carrot had been soaked in something sweet and delicious, while the icy granita and sweet biscuit crumbs were like powdered goodness. Throw in a few plump mandarin pieces and some amazing yoghurt and you've got a wonderful refreshing treat.

But a chocolate-less treat. So it was lucky that our final course brought the chocolate: violet ice cream, chocolate ganachek, clove meringue, freeze-dried raspberries, some sort of nutty sponge and chocolate powder. 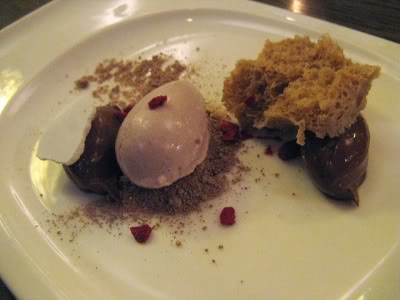 This was astonishing - the little red pellets were concentrated raspberry flavour, the ganache was ridiculously chocolatey, and the violet ice cream was floral without being weird. Combined, this was just a heavenly plate - all the flavours and textures (the meringue added some crunch to all the powders and creaminess) working together to make something wonderful. A perfect end to the meal, and the only dish to compete with the potato and mushrooms as the night's winner.

Cutler and Co really turn it on with the degustation - our meal made stars of beetroot, carrot, mustard cream, fried potato, goats cheese, eggplant, mandarin and ricotta, with each course highlighting the restaurant's wonderful ingredients and inventive cooking. The service throughout was impeccable, and the couple of glasses of wine I had were great - I can think of literally nothing to complain about except for our inability to get a booking before 8:30 and thus eating past 11 at night. But it's popular for a reason, people, so get booking.

Read about our previous visit to Cutler and Co here.

For the completist, make your way through the dozens of C & C reviews at: Suck My Radish, Tasted by Two, Lusciousness, Saucy Thyme, Melbourne Dining, Melbourne Gastronome, Tomato, Melbourne's Bargain Foodie, Doublecooked, Eat (almost) Anything at Least Once, See. Smell. Taste., Record, rewind, play, 1001 dinners 1001 nights, Foodmile's, The Chronices of Ms I-Hua, Injera, Munching in Melbourne, Fitzroyalty, Mel: Hot or Not, Jenius, Jeroxie, Gourmet to Glam and Off the Spork
Posted by Michael at 6:50 am