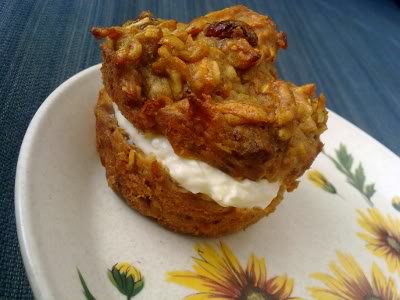 Once my paneer was compressing, I set about making carrot cake using a recipe from Green Kitchen Stories.  I've always liked - though never been wild about - carrot cake.  Done well, it's hearty and delightful for afternoon tea (even better if there's cream cheese icing involved!).  But it's never as nutritious as I might like to think and, let's face it, it's no match for chocolate cake in the treat stakes.
This recipe showed real promise, using wholemeal flour and coconut (like my own recent snack baking), bananas and dates for sweetness (no refined sugar!) and precisely the same number of eggs as I had in the fridge.  In fact, I only needed to add four ingredients to my shopping list and I was good to go!  Instead of making one large cake as Johanna did, I divided the batter into a dozen cupcakes.  Then as a take-'em-to-work trick I sandwiched the agave-sweetened cream cheese into the middle instead of spreading it on top, making them easy to wrap and pack.
The one challenge was achieving the smoothness they need, both in blending the dates for the cake batter and whipping the cream cheese for the icing.  There's probably no need to fuss about the dates as a little chunkiness works nicely with the freckly mix of carrot, sultanas and walnuts.  The few lumps remaining in my cream cheese didn't spoil my day, but it's worth getting the cream cheese right down to room temperature before beating.  Regardless, these have been everything I want in a carrot cake - a pleasing combination of wholesome and treatsome.
Carrot cupcakes
(based on a recipe at Green Kitchen Stories)

Preheat the oven to 180°C. Lighty grease a muffin tray.
Blend together the bananas, dates and oil in a food processor until as smooth as possible. Add the eggs and blend briefly.
Sift the flour, baking powder, cinnamon, nutmeg and cardamom into a large bowl. Stir the mixture from the blender into the dry ingredients in the bowl.
Fold in the carrots, coconut, walnuts and sultanas. Scoop the batter into the muffin tray (I made a dozen muffins). Bake until cooked through, about 20 minutes.  Allow the cakes to cool on a rack before icing them.
To make the icing, thoroughly beat the cream cheese until fluffy and as smooth as possible.  Gradually beat in the remaining ingredients.
Slice each cupcake in half horizontally and spread it with the cream cheese, then gently sandwich the halves together again.  Alternatively, slather the icing on top of the cupcakes.
Posted by Cindy at 3:20 pm