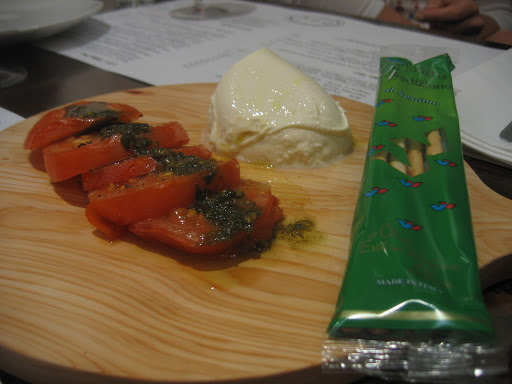 D.O.C. is the new pizza and mozzarella bar on the Carlton block, just a couple steps beyond the touristy Lygon St restaurants and within a cannoli's throw of Brunetti. Michael first pointed it out to me a few weeks ago as we stepped out of Video Dogs, but I wasn't actually that excited about paying it a visit until Claire, the Melbourne Gastronome, showed us exactly what it had to offer. Then, of course, I was all emails and dates and meetings for Friday night.
I met Kerrie and Daniel there right after work and we settled in with a bottle of red and a plate from the mozzarella list. The only vegetarian plate was the cheapest of the bunch, Australian Fior Di Latte with Pomodori Con Pesto (vine ripened tomato with pesto, $13.50). For the mozzarella buff, there's the pricier option of buffalo mozzarella air-freighted from Italy for an extra $4. I was most content with the basic version, by the time the wine was poured and we'd broken out the grissini sticks we had Michael, Mike and Jo-Lyn digging in too. 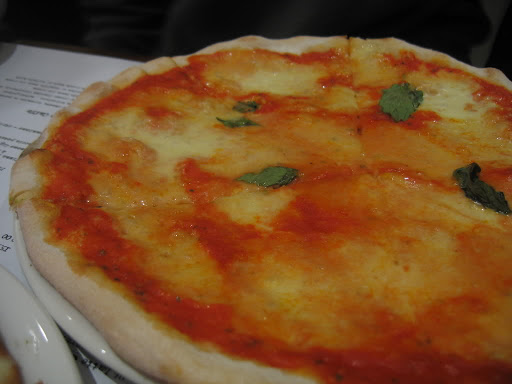 For our main course, we haggled our way to four different pizzas between the six of us - three of them vegetarian, much to my delight. D.O.C. don't allow changes to toppings or half/half pizzas, but the existing meat-free options should be enough to satisfy. In total, five of the 14 pizzas are vego - we gave the olive oil & sea salt and potato, onion, & rosemary foccaccias a miss this time. I was further pleasantly surprised that the two Michaels joined my enthusiasm for the understated Margherita ($14), with its modest topping of tomato, mozzarella and fresh basil. It was probably the best margherita I've ever eaten, with the restrained layer of quality mozzarella and thin, elastic base. 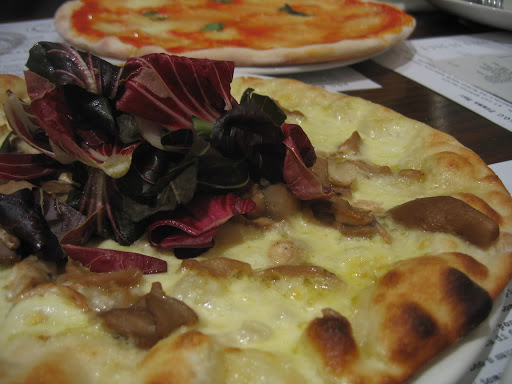 Here's the Pizza Bianca ai Porcini ($21.50), with wild mushrooms, truffle oil and mozzarella. While the distribution of mushrooms might seem a bit miserly, it's actually right on the mark, as the aroma of the truffle oil permeates the base and cheese. This one was topped with a generous handful of bitter radicchio - while I'm not their greatest fan, they were just the thing to cut through the richness of the pizza. 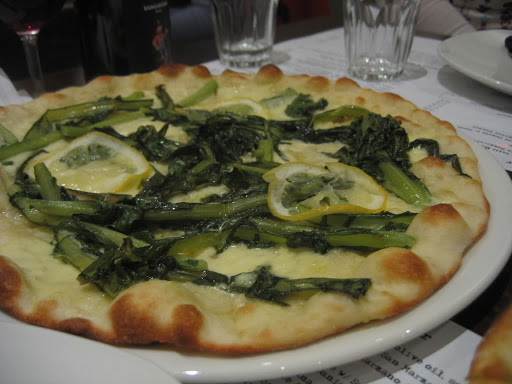 The third vego selection was the Pizza Cicoria ($18), with chicory, piave cheese and lemon. Another winner, with the lemon and cheese making a surprisingly cute couple.
In my opinion these pizzas rank with I Carusi, though Jo-Lyn astutely noted that they're a little on the salty side. The bases have the right balance of crispness and chew and are thin enough to let the toppings show off their flavours. But they're also thin enough to have us all looking at the dessert list... Michael was up for the sweet pizza ($8), with creme fraiche, strawberry, kiwi and vanilla bean icecream. It was enjoyable enough, but not really more than the sum of its parts. 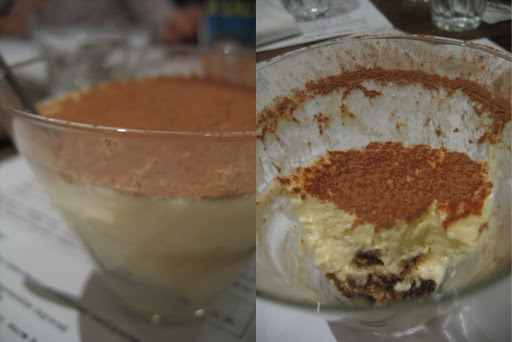 I was most intrigued by the sweet goats cheese tiramisu with pavesini ($8). I would probably have been scared off the idea of goats cheese in a dessert if Claire hadn't tried it already. I certainly noticed the goaty aftertaste in my first few spoonfuls but as I pushed on, my tastebuds dulled and it was all light and airy cream with just the coffee-soaked biscuits adding bite. Also worth noting is the nutella calzoncino with vanilla bean icecream ($8), an enormous pastry filled with molten chocolately nutella - best ordered to share between two.
Friday at the D.O.C. was a success all round - there was never a quiet minute in this company and the pizzas were superb. The service included a few glitches as might be expected for a new restaurant and the friendliness of the staff easily smoothed that over. I'll definitely be back for more high-end pizza, but might take my dessert desires back to Brunetti or Lygon St afterwards.
Address: 295 Drummond St, Carlton
Ph: 9347 2998
Licensed
Price: veg pizzas $8-21.50, dessert $8
Posted by Cindy at 10:13 am