Friday, a week after my wisdom tooth removal, gave the first signs that I should pursue a more toothsome diet. I slowly and carefully ate dinner at the Fitz Curry Cafe, concentrating on the rice and sauce and trying not to look too longingly at the pappadums and naan. Soulfood's French toast was enjoyed with more gusto on Saturday, though I set the stinging acidic pineapple to the side of my plate and happily tolerated a bit of jaw soreness afterwards. For dinner I was keen to get back into the kitchen and create something a bit gentler, but also something with substance.
So I pulled out this recipe for a Middle Eastern tagine, taken from a 2006 copy of the Weekend Australian magazine and written by Nadine Abensur. We made it once before, in Brisbane, to try out our friend Camielle's exotic new tagine. In the absence of a tagine, this recipe is just a easily created with a large saucepan or casserole dish but the result isn't nearly as pretty as the magazine photograph. There, discernible chunks of caramelised eggplant and pumpkin nestle alongside each other, decorated by a fresh sprinkle of parsley. Ours is more of a homogeneous mush, but I think I know why - I skimped on the oil. The veges certainly didn't caramelise in the recommended time and when I gave them longer in the oven, they just released a lot of water and turned to the aforementioned mush. Tasty mush, sure, but nothing like that aspirational picture next to the recipe. A corollary to that incident was that I didn't need nearly as much stock as suggested, but the leftovers proved an ideal liquid for hydrating some couscous. So I suppose I'm suggesting that you try the full amount of oil and the original baking time, but that's a lot of oil, people. We still had issues with oil separating from the rest of the vege sauce in the saucepan. 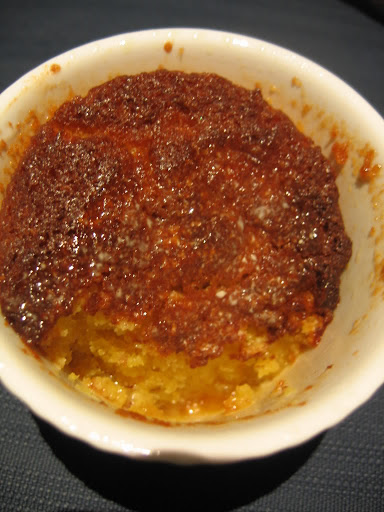 Despite these deviations from the planned meal, the pulpy result was perfect for my own purposes. My dessert, however, proved far more deviant! I pulled out another once-successful recipe, for mandarine and maple syrup pudding, and adventurously tucked it into 6 little ramekins instead of the recommended (and previously successful) large pudding basin. I lowered my little darlings into their water bath, and only then noticed that we were out of foil. Ah, well, who needs foil anyway? These babies were going in hatless. The result was batter overflow into the water, cooked and too-brown tops, and completely uncooked underlayers. I guess that's why real cooks have been using tedious methods such as water baths and foil tops all these years! A lesson in baking humility for me.
Fennel, pumpkin and eggplant tagine
(by Nadine Abensur and published in the Weekend Australian Magazine of January 28-29, 2006)

Preheat the oven to 200 degrees C. Put the pumpkin, fennel and eggplant in a roasting dish and coat them in some of the olive oil. Season with the Tabasco sauce, salt and pepper and roast for about 20 minutes until well caramelised. (As I explained above, I baked mine for more like 40-50 minutes - the veges were too mushy and not caramelised properly. More oil might help!)
Heat the rest of the oil in a large saucepan and brown the shallots, cooking and stirring occasionally for about 10 minutes. Add the garlic and a bit of stock to prevent them from burning. Keep stirring, adding the spices and chilli and forming a paste. Add the stock a bit at a time to create a thick sauce (I used only about 300 mL of it here).
If you have a tagine, transfer the sauce into it at this time; otherwise you can make do with your largest saucepan. With the sauce on low heat, gently transfer in the fennel, pumpkin and eggplant then add another cup of stock. Cover and cook for 10-15 minutes, adding more stock if the mixture becomes too dry. Season to taste and sprinkle over the parsley and coriander just before serving.
Posted by Cindy at 11:17 am