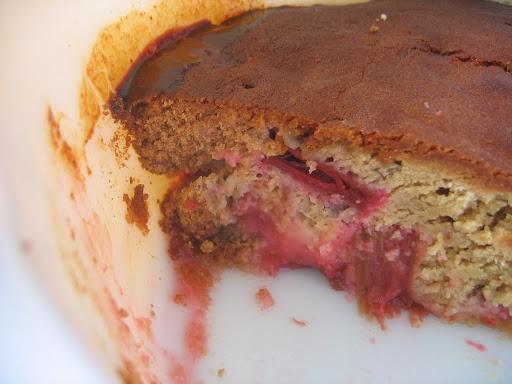 Much as I'm excited to see spring arrive, there are a couple of wintery things that I've been meaning to do prior to gorging myself on asparagus. The main one was to cook with rhubarb. I've enjoyed the tang of rhubarb in a number of compotes and crumbles while eating out, and every time I've seen those crimson stalks at Safeway I've promised myself I'll get some nicer ones from a market. Actually, we barely ventured to any markets this winter and so rhubarb almost passed me by. In a last desperate bid to catch up, I surrendered to Safeway's convenience on the way home from work and made a weeknight pudding. 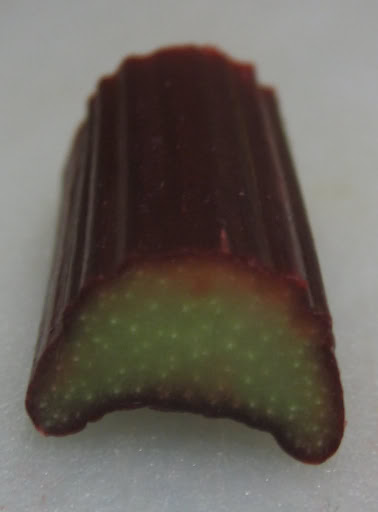 But first I had to inspect my new vegetable. Its smell reminded me very much of celery and I was surprised to see that the core of the stalk isn't pink at all, just green and even more celery-looking. It was difficult to equate this creature with the soft pink strips previously seen on my French toast at Gingerlee. I took an experimental taste and didn't like it at all: stringy with a sourness that wasn't at all fruity, and that pesky likeness to celery. (For the record I actually like celery but its place as a savoury salad vege really interfered with my appreciation of rhubarb as a "fruit".) It briefly occurred to me that I might have picked up some bitter rainbow chard by mistake.
Another blogger (I think it was Matt of MattBites but I can't find the post) waxed nostalgic about eating raw stalks of rhubarb dipped in sugar as a kid, so I tried that as phase two of Getting To Know Rhubarb. This was a bit more agreeable - the sweet and sour taste was starting to come through. A cynical little voice in my head noted that most disliked veges would probably yield the same improvement in taste if I coated them in sugar. Besides, that celery smell and texture were still lurking.... I still wasn't completely convinced that it was actually rhubarb I've been eating out all these years.
But I pushed on and followed this recipe for rhubarb and ginger pudding that appeared in the Age a few months ago. As I spread the small amount of batter over those stiff and disturbingly green sticks, I wondered if this entire exercise was a waste of time and butter. It wasn't. What emerged from the oven was what I knew rhubarb to be - soft and pink and sweet and sour. Better yet, it was encased in a pudding! This one is a fairly dense and not overly buttery cake - the firm surface reminded me very much of gingerbread. It's delicious warm or cool, with or without cream. And if the learning process isn't reward enough in itself, this dessert is the perfect pay-off for trying something new.
Rhubarb and ginger pudding

Preheat the oven to 180 degrees C and grease a 1-litre casserole or pudding dish. Chop the rhubarb into 3cm lengths and arrange them on the bottom of the dish. Pour the castor sugar evenly over them.
Measure the golden syrup into a cup and stand it in hot water, so that it's liquid and pourable. Sift together the dry ingredients (flour through to salt). Cream together the butter and brown sugar. When they're pale and fluffy, introduce the syrup and continue beating. Next add the egg, beating until well combined. Fold in the dry ingredients.
Gently heat the milk and stir in the bicarbonate of soda until completely dissolved. Add them to the pudding batter and mix well. Spoon the mixture over the rhubarb and bake the pudding until it's well-browned and an inserted skewer comes out clean. The original recipe estimates 35 minutes but my pudding took 45-50 minutes to cook through in the centre.
Posted by Cindy at 9:35 pm