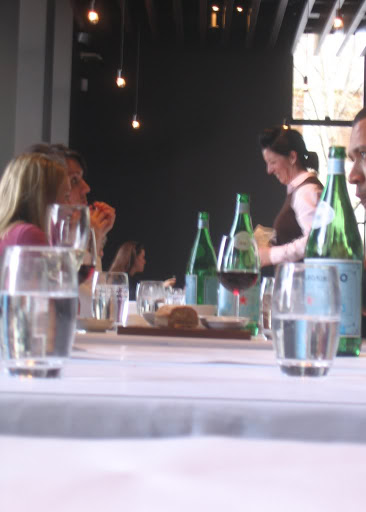 Cindy has been itching to go to the Press Club ever since she fell in love with Georgie Calombaris on Ready Steady Cook while we were living in Brisbane. I think it was his willingness to put together interesting (and sometimes vegetarian!) meals while exchanging witty repartee with Peter Everett, but it may just have been his boyish good looks. Whichever, Cindy's been talking up The Press Club for a while and, after bailing out of our first booking to let Cindy's wisdom teeth heal, we were finally making the trip.

We chose Sunday lunch, figuring that the new chef of the year's restaurant would be packed out at nights. It meant we were there for the Sunday masa lunch - a more traditionally focussed meal than the adventurous dishes Calombaris is developing a reputation for. There are no other options for Sunday lunch, you just sit back and they bring out the food. Once we'd clarified that we were vego, they had a quick conference and reeled off a seemingly endless list of dishes that they were going to bring out. Our waitress seemed new and was a little uncertain about a few things (probably not helped by our vego-ness), but she picked it up as the meal went on.

But first it was time for drinks - I went for a carafe of the white wine, which was pleasant enough, while Cindy opted for a sour cherry soft drink. Instead, she got a limonata, as they'd run out of sour cherry. Except it turns out that they hadn't (this was while our waitress was still struggling a little) - a few minutes later she ended up with two drinks to enjoy - to match with different courses I guess. 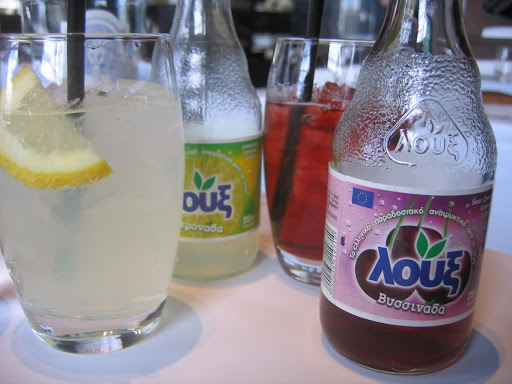 With that confusion out of the way, it was on to the food. First off was a plate of bread with olive oil and fancy black salt, which combined tremendously well with the tomato and lentil soup that came out shortly afterwards.

This was followed almost immediately (I'd just finished my soup, but Cindy was barely halfway through) by the meze plate, a colourful selection of Greek nibblies. There was a Greek salad (with some seriously scrumptious feta), a plate of marinated olives (which even Cindy kind of enjoyed), pickled cabbage (Cindy's favourite on the plate), a beetroot tzatziki and dolmathes (my favourite). This was all pretty enjoyable, but it was around this point that we started to get overwhelmed with the dishes flying out of the kitchen. 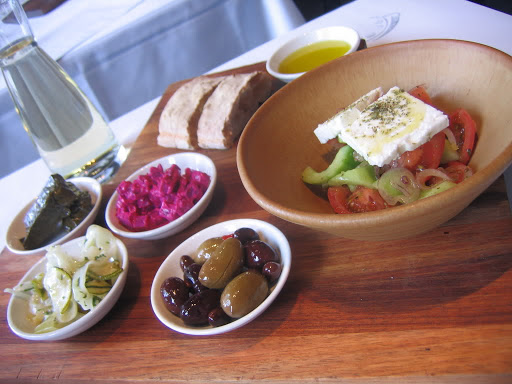 I'm not sure if you're supposed to wind up with a backlog of dishes on your table or if something was a bit off with the timing in the kitchen, but we had no chance of keeping up. Anyway, Cindy just sat back and enjoyed hers happily letting the dishes pile up around her, while I foolishly tried to keep up with the onslaught and ended up feeling a bit stressed out by it all. It certainly wasn't the laidback Sunday afternoon feeling I was expecting. But that's by the by, let's push on with the rest of the food.

Next up was another wooden meze tray, this time with a plate of spanakopita, a couple of roast tomatoes stuffed with some sort of rice concoction and an iceberg lettuce salad dressed with lemon juice. The spanak was tasty, without being as mindblowing as Cindy had hoped (I think she expecting one of Georgie's more innovative creations - he does some odd seafoody spanaks, so it was bit of a shame that the vegie one was just a standard effort) and the tomatoes looked great (if you like that sort of thing).

With a bit of table rearrangement, the next set of dishes arrived: a bowl of lemony roasted potatoes, a haloumi, shaved fennel and orange salad and a roast pumpkin and almond bougatsa (basically a filo wrap filled with a pumpkin mix). Cindy was really excited about the potatoes, but unfortunately they were a bit of a let down - a little on the dry side and not particularly lemony (we both had fond memories of the oily lemon spuds at Lefka's Taverna in West End). Luckily the haloumi salad more than made up for it. This was easily the highlight of the meal - beautifully fried haloumi, which combined well with the shaved fennel and slices of citrusy goodness. Throw in the grape confit that was drizzled over the whole thing and it was a non-stop flavour explosion. The pumpkin filo was fine, but I was filling up by this stage and it was a little on the heavy side for my near-bursting stomach.

By now our table was overflowing with food - we struggled on bravely and made a decent dint in all of the dishes before eventually throwing our hands up and quitting. Luckily, this was the point where they chose to pause our non-stop food attack, giving us a decent fifteen minute breather before the desserts came out. When they did, we were given a little paper bag containing six different dessert nibbles: some sort of mini Greek donuts, some little baklavas and some sort of vaguely custardy thing. All were fantastic (particularly the baklava, which I'm not usually a huge fan of) and the coffee they served up was high quality as well. 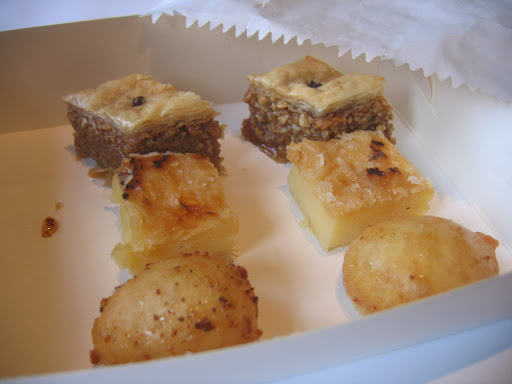 The finale was a series of Greek spoon sweets - preserves of quince, eggplant and pistachio served up on little spoons. They were delicious, although our waitress made some ambiguous comment that suggested we probably weren't supposed to eat all six. 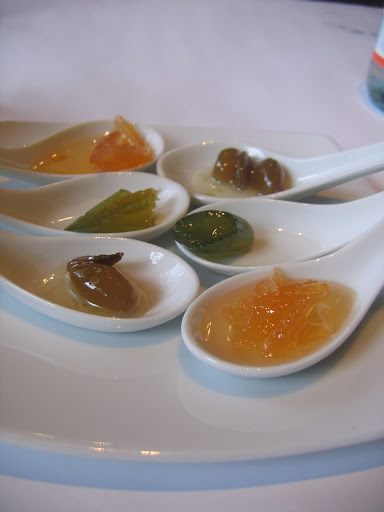 On the whole, it was probably a slightly disappointing experience - I think we'd be better served ordering off their regular menu when there are a few more exotic options like the haloumi salad. Everything else was fine, but none of it was particularly thrilling. The service was a little uncertain, but in a friendly and entirely forgivable way and the room is airy and light in the afternoon (which is good for Cindy's photography). We won't write off The Press Club for our future slightly upmarket dining experiences, but I doubt we'll pick the Sunday afternoon masa for our next attempt.