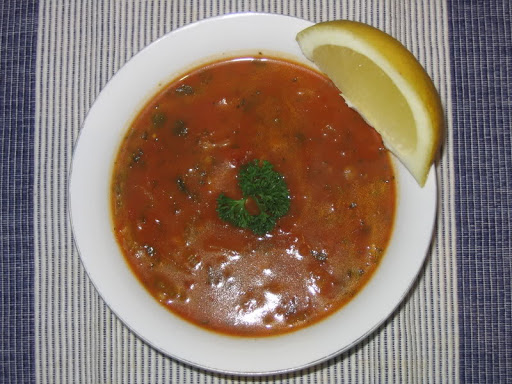 This soup was another attempt to return to something resembling healthy eating after some overly cheesy meals. We originally planned it as an accompaniment for Another Outspoken Female's millet, pumpkin and almond pilaf, but our failure to find hulled millet anywhere meant it had to stand alone. Luckily, the soup was a roaring success - one of the most flavoursome soups I've eaten, with each spoonful offering new tastes: the sharp black pepper, warm spices, rich tomatoes, tangy lemon juice, nutty lentils and crisp celery all made appearances. With some chunky bread for dipping, it was probably one of the best meals I've cooked since this blog began.

Savoury harira soup
(once again, adapted from a recipe in Ken Charney's Bold Vegetarian Cooking, which is fast becoming my favourite cookbook)

Heat a couple of tablespoons of olive oil in a large saucepan and throw in a chopped onion, a couple of chopped celery ribs, 1/2 cup of chopped parsley, a teaspoon of turmeric and a teaspoon each of salt and pepper (make sure you put enough pepper in, it really adds to the final product). 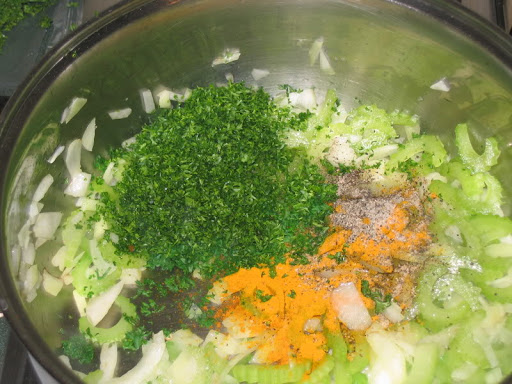 After frying the mix for about five minutes (until the onions have softened), add teaspoons of paprika, caraway seeds and cinnamon, a couple of bay leaves and 1/4 cup of chopped coriander. Stir through for about thirty seconds and then pour in two 400ml cans of chopped tomatoes, a tablespoon or two of tomato paste, 1/2 a cup of lentils and one and a half litres of vegie stock (we opted to use readymade stock rather than go through the homemade stock rigmarole again). 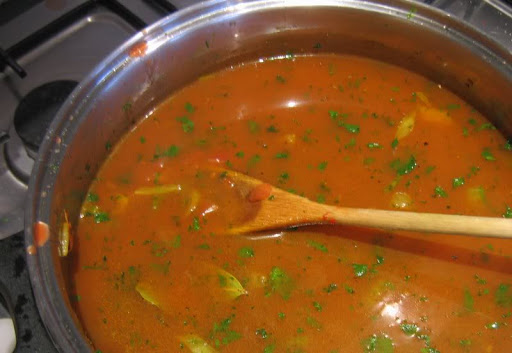 Bring it all to the boil and simmer for about twenty minutes. Just before you're ready to eat, stir together a few tablespoons of flour and 1/2 cup of water in a small bowl and whisk the resulting paste through the simmering soup mix to thicken things up a bit. Serve with fresh bread and a slice of lemon for a spicy soup sensation.
Categories
Posted by Michael at 6:26 pm