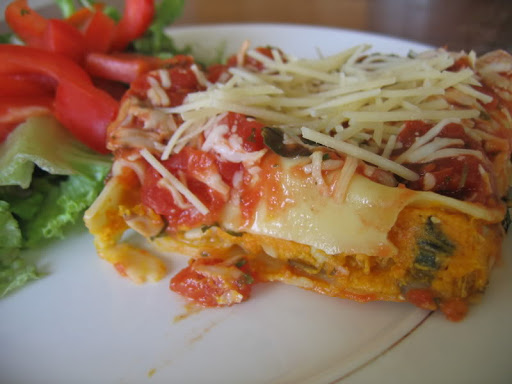 On Tuesday night I improvised a cannelloni style meal, with the purpose of making a dinner that would use up some lasagne sheets and provide leftovers for lunch. As you can see from the picture, lasagne sheets do not make pretty, closed pillows and actually created a bit of a mess all round (this is a cold next-day one, which was at least a neat square). Still, both Michael and I loved the flavour: with a couple of tweaks and some proper cannelloni tubes, I'd cook this for guests. 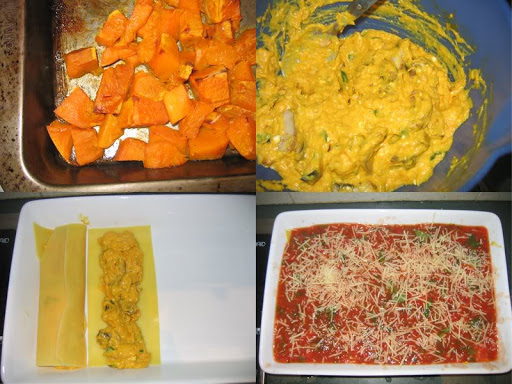 Filling: Michael peeled, chopped and roasted some pumpkin with a splash of olive oil. It'll take roughly half an hour in the oven at 180 degrees: the aim is to get the pumpkin a bit caramelised and soft enough to mash. Then I transferred the pumpkin to a bowl and, you guessed it, mashed it up. To the bowl, I added three huge tablespoons of quark (from the Collingwood market), a small packet of pine nuts that I'd toasted in a frypan, some leftover sliced mushrooms, and some ripped up fresh basil leaves.
Cannelloni-ing: Next I filled up the frypan that I used to toast the pine nuts with hot water and cooked the lasagne sheets in batches. I didn't cook them until they were completely soft, just until they were pliable. Then I'd plonk one into a baking dish, spoon a line of filling down the middle, and use another sheet to roll around the filling. In an ideal situation, you could probably fill up cannelloni tubes without pre-cooking them, then bake the lot for longer to ensure that they've softened enough.
Sauce: I briefly fried a few cloves of garlic in butter, then added a huge can of crushed tomatoes. After it had reduced a bit, I added some more ripped up fresh basil and some chopped parsley. I'll omit the parsley in the future because I thought its flavour overpowered the basil, pumpkin and pine nuts. (They're really the key combination here, I think!) The sauce gets poured over the cannelloni and cheese is sprinkled on top (leftover parmesan for us). Then it all goes in the oven until the cheese is melted and the pasta's cooked to your liking.
Categories:
Posted by Cindy at 7:17 pm