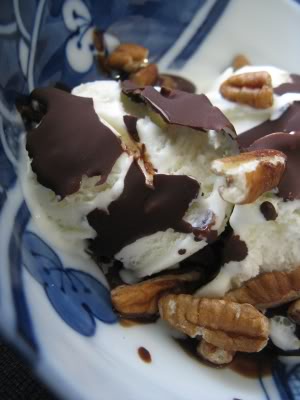 I bet a few of you instantly recognise the chocolatey shard shapes pictured above, yes?  You might even be thinking, "It's Cottee's Ice Magic to be quite precise, and in just a few seconds it turns into crackly choc ice!"  (Or, if you grew up in the US, perhaps you know it as Magic Shell.)  This was my favourite treat when visiting my grandparents as a kid and in the past couple of years I've bought a couple of bottles and re-experienced the magic in full.  (That's some industrial-strength nostalgia right there!)
I assumed they were pulling out the industrial-strength chemicals to create the liquid-to-solid transformation, but it turns out you can make it at home.  With 2 ingredients.  They're not even very scary ingredients.  What's more, it's both vegan and gluten-free if you choose those ingredients well.  K and I got talking about it on twitter and she already tried it out in January.  What I can tell you now, as the temperature skips and dips more often, is that it behaves (as well as tastes) very much like the real deal:
This could have me eating icecream all winter long.  I suppose it could be dressed up with a little instant coffee, peppermint essence or even rosewater, but right now I'm still hooked on the original.
(For the record, I first tried this out as dessert for our third Simpsons Night after a dinner of Indya Bistro takeaway [thanks Mike].  That tag-line we used to run about being reformed Simpsons addicts is probably best forgotten.)

Choc-ice Magic
(based on a recipe from The Accidental Vegetarian,
found via In The Mood For Noodles)


In a small saucepan over gentle heat, melt the coconut oil.  Add the chocolate and stir regularly, until the chocolate is melted and you have a smooth sauce.
Spoon the sauce over icecream and store leftovers in a jar at room temperature.
Posted by Cindy at 8:00 pm