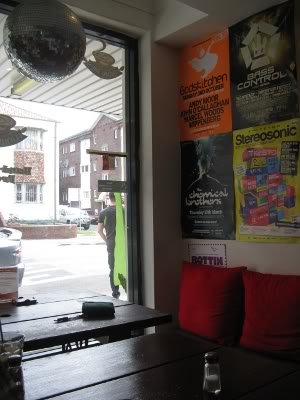 We might have been holidaying in a novel and cheerfully sunny city, but Sunday dawned a little grumpy. We'd stayed up watching rage, some of us had consumed more Frangelico-lychee cocktails than strictly necessary and would you believe it? We were ravenous. Then we agreed that we would try out Funky Pies at Bondi for brunch, even while acknowledging that we were condemning ourselves to another hour or so without food. That hour or so sure did stretch out - on the train, a second train, a bus and on foot, shuffling around Bondi with a map on a phone.
Thankfully Funky Pies was not excessively difficult to find and there was plenty of room to seat the six of us inside. While Craig ordered a couple of pastries from the oven before we'd even picked a table, I was relieved to see a more conventional breakfast menu and took a few minutes to choose my meal. Everything's vegan, so instead of eggs and bacon it's all scrambled tofu, sauteed mushrooms and pancakes, with quinoa porridge and a breakfast pie adding some novelty - that's my kinda breakfast menu.
My loyalty to 'normal' breakfast was sorely tested when I realised that the pies'n'mash meals were being served up first. Craig had polished off his first plateful and had ordered the second before my soy chai even arrived; a chai that was disappointingly heavy on the bergamot. 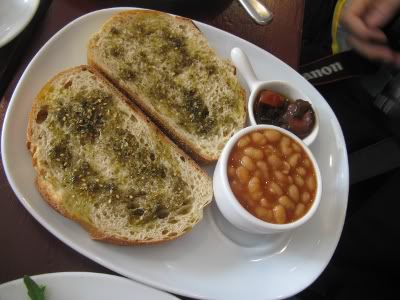 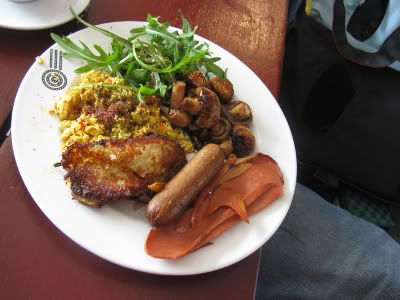 Eventually Michael's Big V ($15.50) arrived, and it's so big that it comes on two plates! The baked beans were most likely canned and therefore a little disappointing but the side-serve of chutney and zaatar-sprinkled toast added all the spice those beans lacked. On the primary plate were Redwood 'sausage' and 'bacon', rocket, some perfectly sautéed mushrooms, a very nice spiced tofu scramble and a bona fide home-made hash brown. Michael kindly offered me a taste of the hash brown and as I waited and waited for my own meal, I tasted and tasted more of that hash brown - mushy in the middle with a golden pan-fried crust. It was the realest hash brown I've encountered in a cafe, the kind of thing that used to come from my grandmother's frypan. 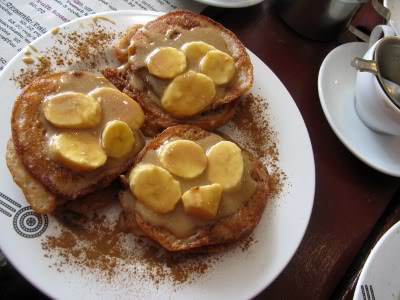 Michael was well into his Big V (and I'd just about finished his hash brown) before my pancakes ($11.50) showed themselves. By this time I was regretting my sweet, late order and envying everyone else's savoury pastry and potatoes. But one mouthful set me straight - Funky pies' pancakes are magic too! They had the thinnest layer of buttery crispness on the surface and a little heft to them, as if there was a non-white flour involved. There was just enough banana to go around and the butterscotch sauce was brilliant. Really, I'm not sure that pancakes ever get better than this.
Getting a feed at Funky Pies took far too long but once the food arrived all was forgiven. These were the best vegan breakfasts we've ever eaten out. The cafe has a nice, unpretentious fit-out and cheery, unpretentious staff in a decidedly pretentious part of Sydney. We might be able to buy their pies here in Melbourne, but the rest of their in-house menu earns them must-visit status on any future trips to Sydney.