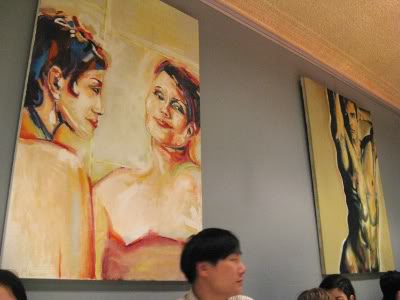 Zenzero Blu are still hosting $25 vegetarian degustations! As we noted on our visit a year ago, they are willing to serve a vegan adaptation for large pre-booked groups and my recent revisit was as part of such a group. 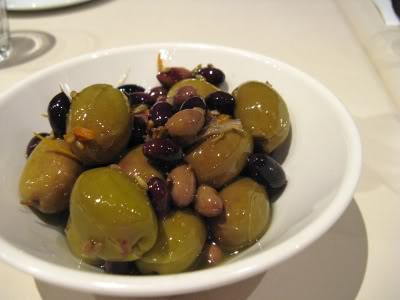 They started us off with warmed marinated olives.  Though I'm far from an olive lover, I ventured to taste a couple of these and almost enjoyed them!  They were marinating in a very pleasant olive oil, with some bites tasting of aniseed and others of garlic. 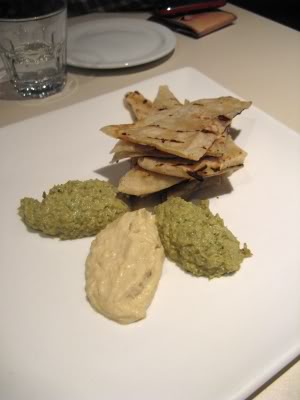 The olives were followed by hummus, a Moroccan lentil dip and roti.  The lentil dip was our hands-down favourite and the roti had a nice smokiness thanks to some charred grill marks. 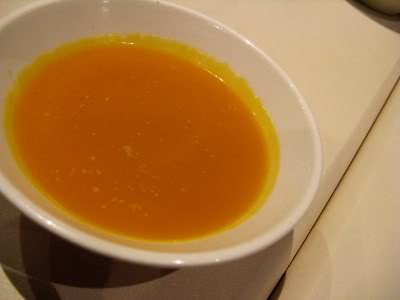 After a bit of a wait, we were served with a dish of pumpkin soup each.  The stock base was nice and salty, but it wasn't otherwise anything remarkable.
Then a very long wait ensued.  It was past 9pm and we'd had some nice entrees, but we were still rather hungry. 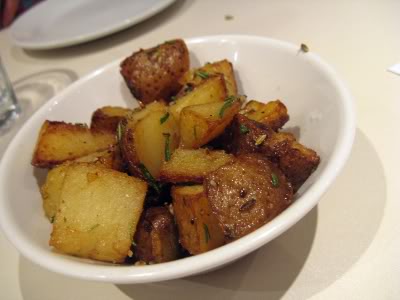 The food drought was finally broken near 9:30pm when were were presented with these Dutch cream potatoes flavoured with garlic, fennel and rosemary.  Referring to the menu it looked suspiciously as if we might have missed two courses; thankfully these arrived while we were chowing down on the spuds.  It may have been the hunger overriding reason, but wow.  These roast potatoes were spectacular.  Golden, crispy and savoury-spiced on the outside, creamy as advertised inside.  I reckon I could eat these daily and never get sick of them. 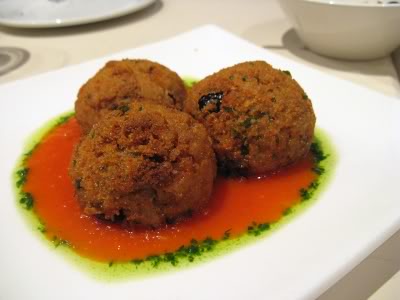 The porcini mushroom and pumpkin arancini evoked neither porcini nor pumpkin. (The two mushroom-haters near me ate them without wrinkling their noses at all.)  But they had the right texture and were pretty good dredged through the sugo sauce. I love the presentation with the psychodelic herb-oil fringe. 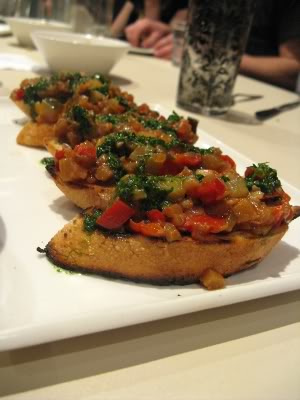 The crostini with caponata and salsa verde arrived very late in the meal but were well received. 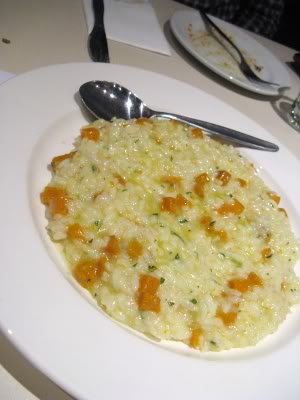 It was then that the chefs made a curious serving decision - out came large communal plates of pumpkin and sage risotto and individual bowls of the side salad. I would usually expect the converse! The risotto was a good one, but between the pumpkin soup and arancini I felt as if we'd already covered these flavours and textures tonight. 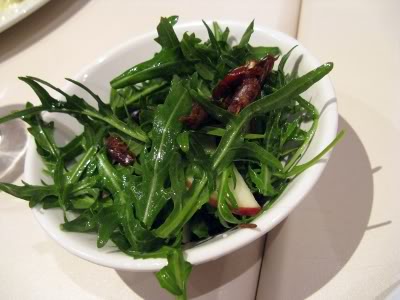 The salad featured bitter rocket leaves, which concealed apples, dates and walnuts. It was the right punchy counterpoint to the risotto. 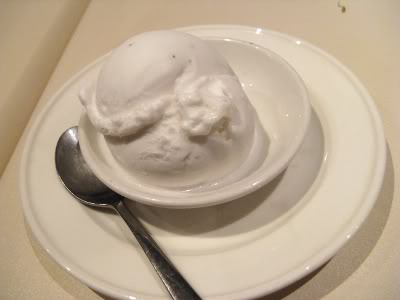 I was very happy to finish up with the same coconut and kaffir lime sorbet that a vegan friend raved about last year.  It certainly was rave-worthy!  Its feather-light, creamy texture was everything I wish my home-made coconut icecream to be, and probably even better than the very special one we tried at Vegans Choice in Sydney.  It was a bit short on the lime for my taste but oh, the texture was incredible.
It's all really an incredible deal at just $25.  Some dishes are a little unimaginative but all of them were very well executed and a couple are absolute gems.  It's a great venue for gathering together a group of friends and enjoying their company over a few hours, a few dishes and perhaps a few wines.
____________
You can read about our previous visit to Zenzero Blu here. Since then, it's also been blogged on Itsy Bitsy Food Reviews.
Posted by Cindy at 10:24 am