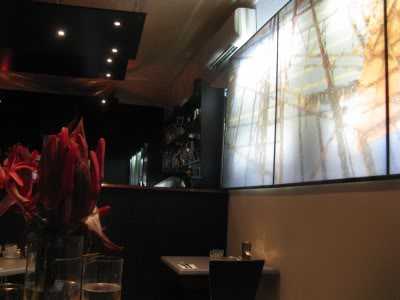 Every time I've ridden along St Georges Road in recent months, my eye has been caught by a sign promising, "Eight court vegetarian degustation, $25!" Typically, my first thought was, "That can't be much good," which, if nothing else, illustrated that behavioural economics applies to food. For a restaurant in the heart of the trendy inner-north, Zenzero Blu has attracted very little online buzz, with just Haalo's photo review giving us an idea of what to expect. Still, for $25, what could really go wrong?

The vegie degustation has been introduced by the Zenzero Blu folks over winter basically to get people into the restaurant during otherwise slow months. And it's working - by about 7:30 things were pretty jammed, and it seemed as though most people were diving into the unbeatable $3.12 per course feast. The menu is intriguing - it's hard to really pick a theme: things range from a lightly curried pumpkin soup, through arancini, nasi goreng and potato wedges. It's an odd mix. But a delicious one nonetheless.

First up were a couple of snack plates: marinated olives on one and roti and dips on the other. 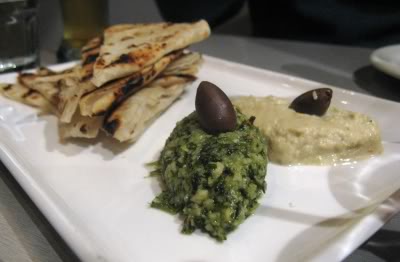 Roti with dips turns out to be a fantastic idea - I'm surprised it's never occurred to me before. And these simple dips (a pesto and a tahini-heavy hummus) worked nicely with the crispy little breads. They even managed to serve things up so that the amounts of bread and dips were reasonably balanced! 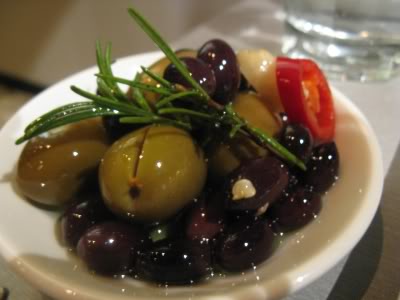 The olives were a mixed bag: some delicious big green ones, and a pile of tiny little kalamata-y ones that were a bit annoying to eat (too much pip for too little olive). 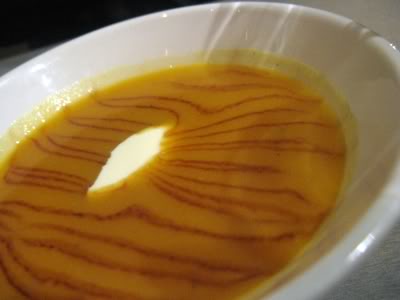 Next up it was soup time: a curried pumpkin soup served with stylish stripes of date molasses and a dollop of labne. The pumpkin soup itself was fine, but the real star was the date molasses - it's intriguing sweetness taking a fairly standard dish somewhere a bit more interesting.

Things jumped in an Italian direction next, with porcini and pumpkin arancini served in tomato sugo. 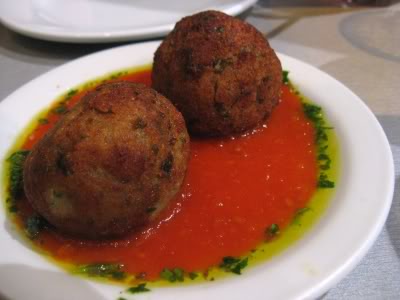 The arancini balls were a little disappointing - a bit mushy and not particularly flavoursome. The sauce was a treat though, oily and rich. 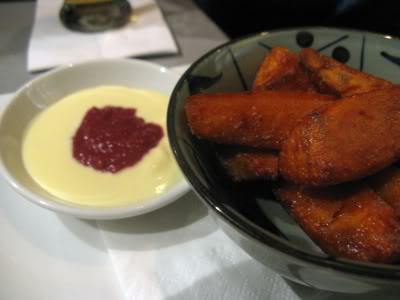 Next up was a bowl of sweet potato wedges, with a dipping sauce of beetroot and creme fraiche. There's something about the texture of sweet potatoes that means I'm always a little disappointed by them in wedge or chip form - the taste is a nice shift from regular spuds, but they just fail to crisp up and provide the necessary texture. The dipping sauce was a nice idea, but didn't really knock our socks off. 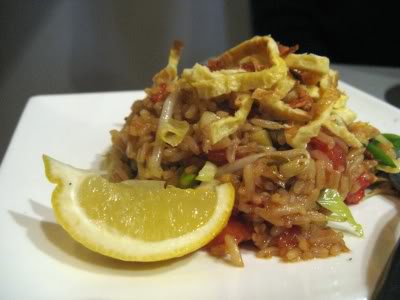 Things then took a turn for the Asian, with nasi goreng topped with some thin egg strips. This could have used a bit more zing - there were no crispy vegies bursting out of it and a bit of chilli would have combined with the lemon juice nicely. It was fine, but not particularly memorable.

Next up was a refreshing salad of rocket, pumpkin and walnut served with an Asian sesame dressing. 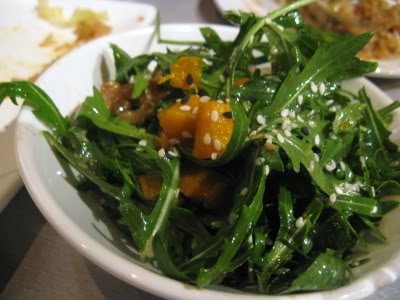 The salad was a nice lead in to our last savoury course: warm breaded goast cheese with honey. 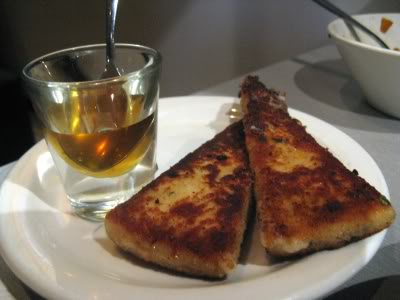 This was indulgent as it sounds - it's hard to go far wrong with fried cheese. Although I'm glad it was only one slab of cheese each, I could feel my arteries starting to harden by the time I'd finished mine.

Finally, our dessert: a mini lemon-scented cheesecake with raspberry coulis. 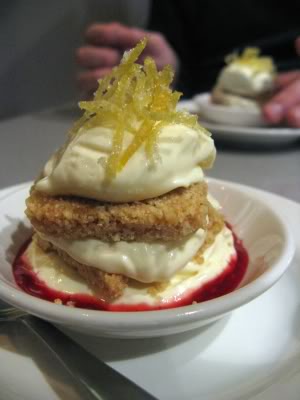 This was the most successful dish of the night - a kind of deconstructed cheesecake that had a nice citrussy flavour and a berrylicious sauce. I think Cindy would have enjoyed a few courses of mini desserts, but for me this was just the touch of sweet I needed to wrap up an eight course extravaganza.

For $25, Zenzero Blu are churning out an amazing meal - it's hard to imagine that they're making any money at all on the food. It's varied (maybe a little scattershot), tasty and well portioned, the service is friendly and helpful and I would highly recommend a visit here to anyone looking for an affordable but slightly special night out. The only downside: Cindy and I felt like there wasn't much served up that we couldn't have produced at home (more slowly and expensively no doubt).

A note for vegans: while the menu stresses that there are no alterations, friends of ours had a private function there and enjoyed a similar 8 course vegan feast, so if you call ahead they could probably work something out for you.