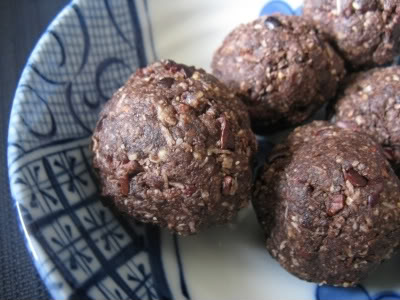 Others have already blogged about the wonderful vegan potluck held in Miss T's home last Saturday, so I'll just focus on what I made (noting along the way that Kristy's vegan chorizo was otherwordly in its tastiness). The theme for the event was 'new', and the easiest way for Cindy and I to do something new was for me to take care of the sweets and her to deal with savoury.

In the end, I was almost embarrassed to present my offering, chocolate nut truffles courtesy of Johanna, alongside the other stunning desserts - they were trivially simple to make, and just a tiny bit disappointing (at least when put up against white chocolate risotto and peanut butter icecream). I really liked the flavour of these little balls, but the texture was a letdown - they were a bit dry and powdery and were only really rescued by being served with a variety of delicious icecream to moisten them up. I'm not sure if I mismeasured something but they didn't have the gooiness of Johanna's version.

Anyway, here's the recipe - experiment with upping the proportion of liquids slightly.

It's barely even worth writing directions: you just put everything in a mixing bowl and stir it all together. That's it! That's your mixture. Roll it into golf-ball sized spheres of deliciousness and refigerate. And you're done. See - that's a shamefully straightforward effort for a potluck. I'll have to go for something a bit more complex next time.

PS: Mad props to Rachel for hosting us all - it must almost be our turn again.
Posted by Michael at 8:39 pm