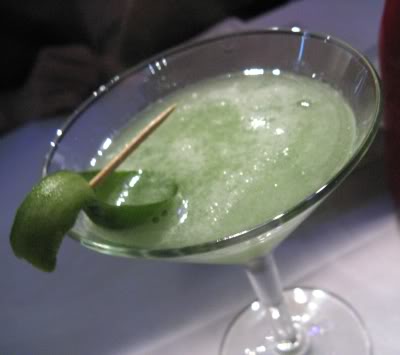 Cafe Vue's cocktail nights are always a lot of fun and we gave it another spin in September, when the theme was martinis. Though all the drinks were served in martini-appropriate glasses, the theme was followed very loosely, with none of the cocktails resembling the traditional version so much as the one we drank here last year. Apologies is advance for the particularly mediocre photos - the lighting here is not picture friendly, but then neither is consuming five cocktails.

First served was the barista's martini (pictured above) - with cucumber jelly, lime juice and mint-infused sugar syrup, it reminded us of raita and had me wishing for some onion bhajis on the side. 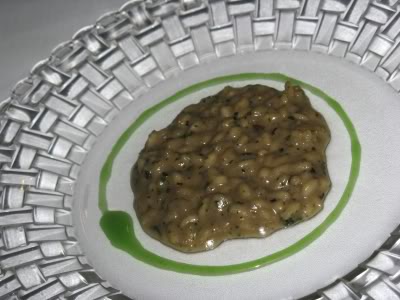 Instead we were served this - "mushroom risotto with... I don't know what". Uh, thanks. I take it that's the tarragon emulsion we were served with the mushroom risotto last time. And the time before that. Shannon Bennett must be really bloody proud of this risotto, because he seems to serve it to every vegetarian that walks through the door. But if we must be served risotto over and over, I'm glad it's this one - it's one of the deepest, richest risottos I've ever tasted. 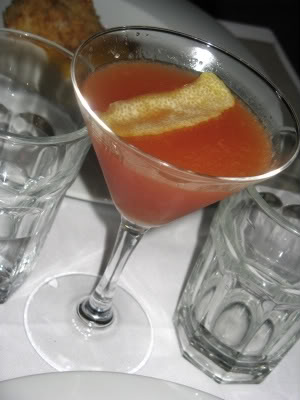 The sommelier's martini didn't include any wine that I was aware of, though there was Calvados (apple brandy), blood orange and a lemon twist. 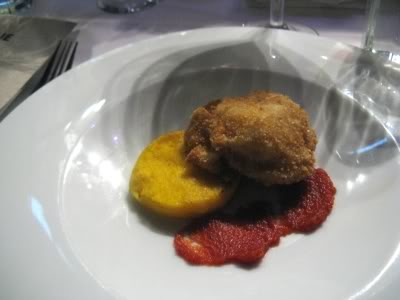 For the paired plate we received 'fried egg on toast'. This is one of those low-heat/slow-cooked eggs with a just barely solidified white and gooey yolk, panko-crumbed. Michael loved it and I rather liked it myself. The cheesy polenta cake helped and the lemon ketchup was excellent, though I would have liked a bit more. This slight imbalance might reflect the three meat-based elements that were on our companions' plates but not our own. 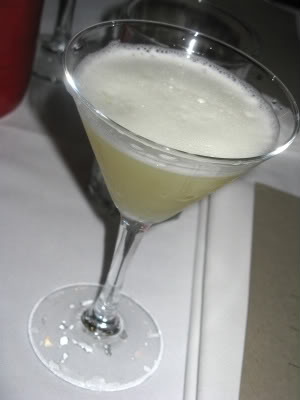 The waiter's martini was flavoured with Grand Marnier and apple juice, then frothed up with egg white. The egg white frothing seems to be a favourite approach here and at this stage in the evening I pulled out a favourite approach of my own - forgetting to photograph a dish. It was the cheese course, a goat's cheese served with three textures of honey. This wasn't the salty white curd that I'm accustomed to, rather a light yellow washed rind cheese, silky and nutty. The accompanying honey was served in sticky crystals, as a foam and as a jelly. None of them really enhanced my cheese-eating experience, though I did very much like the small square lavash crackers. 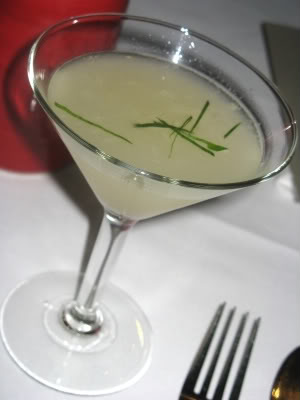 Surprisingly this was not a transition to dessert. Instead we received the chef's martini, a burning ginger concoction garnished with kaffir lime leaves. I loved it! 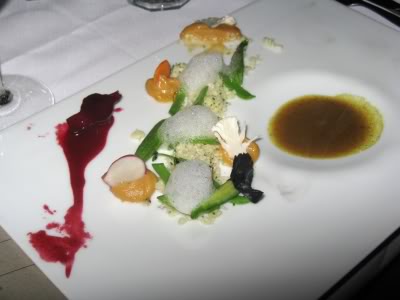 Our final savoury plate involved cauliflower couscous, beetroot, some kind of gravy and some other stuff. Don't blame me and my blood alcohol for the vagueness of this description; it was actually all our waiter could cope with sharing. (I did wonder if he'd been matching us one-for-one on the cocktails.) These morsels were tasty but the pretty plating was awkward - it's difficult to scoop up much of the sauces, or indeed the teeny vegetables themselves, when they're sparsely displayed on such a flat surface. 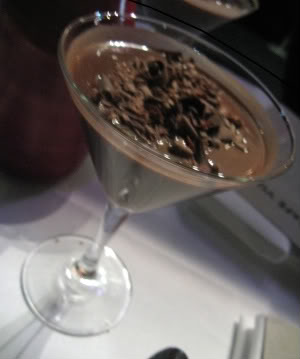 The maître d's martini was the pièce de résistance - a ganache with white crème de cacao garnished with bittersweet chocolate shavings. There are few things I love more than ganache, and this was a stunningly silky, dangerously alcoholic sample. 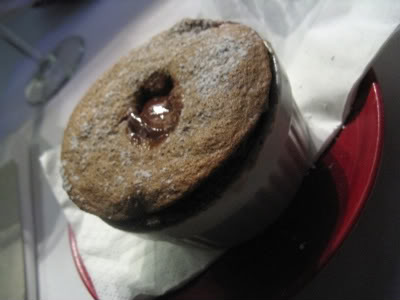 My glass of ganache was finished by the time the Valrhona chocolate soufflés arrived. Though they'd risen admirably, I felt a little deflated. Baked until a crust has just formed, they were 80% chocolate-flavoured frothy egg white. Some folks'll adore this dessert but after splashing around in the maître d's martini, I had no need for froth, more chocolate, or anything at all but water. So we lingered for an hour and I downed a good litre or more of the stuff.

At $75 a head, Cafe Vue's cocktail nights are terrific value when you're in the mood to splash out. Not every dish or drink will suit every palate but there's always something that impresses.


You can read about our previous cocktail night experiences here and here.
Posted by Cindy at 7:44 pm