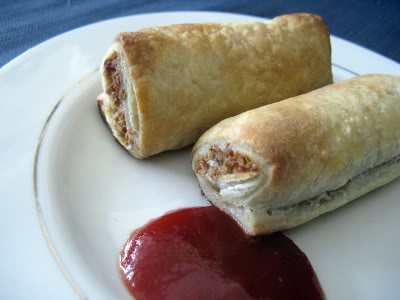 On a recent trip to Radical Grocery, Michael picked up a box of Linda McCartney brand vegetarian sausage rolls.  They're totally vegan and can go straight from the freezer to the oven.
I did not hold high hopes for the pastry but it was actually rather good!  Though it looked heavy and not particularly golden, it was surprisingly flaky.  The wheat protein-based filling was less impressive, having a rather rubbery texture and very little flavour.  (Veganator recently noted that Linda McCartney country pies don't taste of much either.)  These are probably no worse than most meat-based sausage rolls available at your local supermarket but they're poor cousins to what La Panella (and dare I say it, I) can conjure up. 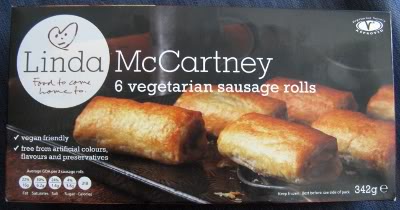 Labels: Pies and other Pastries, Vegan or vegan-friendly