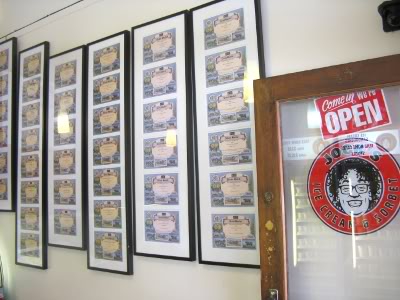 I only just heard of Jock's Ice Cream & Sorbet this month on Melbourne Best Cheap Eats, though apparently it's been in business since 2001. It's clear on entering that they've spent this time rapidly perfecting their craft, with their wall boasting numerous awards. There were over two dozen different ice cream and sorbet flavours on offer, covering the range that most people will look for - cheery-hued fruits, chocolate, coffee, caramel and vanilla. There are also a couple of seasonal novelties - at the moment there's plum pudding and my pick, Obamarama (peanut butter and jelly). While I detected the peanut butter and jelly distinctly in my first few licks, soon enough my tastebuds dulled and it was more of a homogeneously sweet experience.
What's notable about Jock's ice creams is their texture - more akin to an airy, creamy soft serve than a dense frozen custard. It was luscious to lick on that 28-degree day, but I imagine this style of ice cream would rapidly be lost on the ground in a puddle if the weather were any hotter.
On a warm day, this is ice cream worth crossing town for. And if it requires such a journey there's the opportunity to stock up on takeaway tubs while you're there, so bring an esky! Located only a short stroll beyond Kamel, Misuzu's and Andrews Hamburgers, I'll be making the trip for more before summer's done.