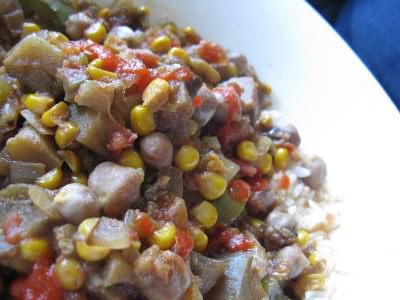 At 3:30am on my birthday, when I couldn't sleep, Michael gave me a slow cooker. Until now, my knowledge of slow cookers has extended to stews and dried beans - the stuff of winter. (But, as Michael observed, "your birthday's not likely to fall in winter anytime soon".) Michael also supplied me with Fresh from the Vegetarian Slow Cooker by Robin Robertson, author of Vegan Planet and 1000 Vegan Recipes. This book quickly set me straight - as well as the chapters on stews and beans that I expected, there are also sections devoted to appetisers, breakfasts, desserts and beverages! Sitting on my bed at that early hour, I got a little over-excited as I scanned a dessert section with multiple vegan-friendly cheesecake recipes and a beverage section featuring warming winter punches. If this slow cooker were a little more cycle-friendly, I could see myself taking it to every vegan potluck for the next year.
In the later morning light, I scaled back my ambitions and focussed on making something we could enjoy during a week full of social activities. I returned to the more conventional sections on stews and vegetables, finding several chili recipes and settling on one that emphasised summer vegetables. Chopping and sauteing all the veges took some time, so the slow cooker wasn't a labour-saver in this instance. (In particular I found the eggplant peeling and corn-cob shucking a real drag.) However it did produce a chili different from any I've eaten before. While the vegetables were gorgeously tender after 8 hours of cooking, I was amazed that they hadn't disintegrated - the eggplant cubes and corn kernels still retained their own structures and textures.
Chili like this is wonderfully versatile: we ate it on rice, slathered it over corn chips to make nachos, and stuffed it into toasted sandwiches. 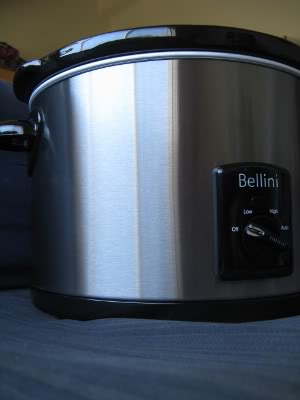 Heat the oil in a large frypan and gently saute the onion, celery, eggplant, capsicum and garlic for 5 minutes. Stir through the chilli powder and take it all off the heat.
Tranfer the sauteed veges to a slow cooker and add the remaining ingredients, seasoning to taste. Cover and cook on low for 6-8 hours.
Posted by Cindy at 7:17 am