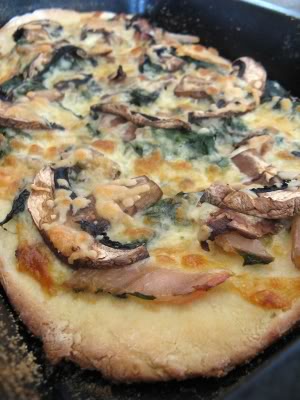 It was agreed only a few days in advance that Christmas day would be spent at my house. This was not as daunting as it might seem - the guest list extended only to my mum, aunt and brother, and none of us sought anything elaborate or ceremonial. I quickly settled on a menu of pizza and icecream, delegating drinks and snacks to others.

I was so relaxed about this plan that I didn't shop for pizza ingredients until the afternoon of Christmas Eve. At the deli the young attendant and I muddled and joked our way through finding some pizza-appropriate ham. I moved on to the bread section - I was not planning on getting caught short with another home-made base mishap on Christmas day, but found an insufficient supply of ready-made pizza bases. I was going to have to supplement them with something home-grown. 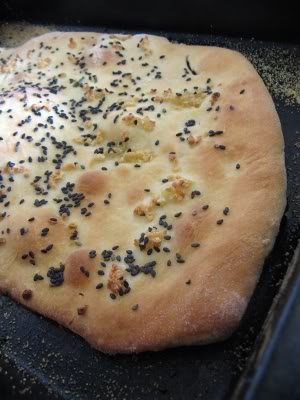 Praise be to delicious, where it only took a couple of clicks to find Lindy Loo's "easiest pizza dough in the world". Using dry yeast (I had the not-yet-expired kind this time), this dough would allegedly be ready in 15 minutes. And it seemed to be, though with all the chatter and drinking and snacking it actually had a little longer to prove. I rolled two messy tray-shapes out of it and they baked into lovely medium-thick crusts - a little airy in the middle and plenty crispy on the base to support the toppings. I won't hesitate to go back to this recipe next time I'm making pizza at home.

For the first round I kept it simple, sprinkling the base with olive oil, crushed garlic and black sesame seeds - it worked both on its own and slathered with dip; I think it would have been spectacular with a little rosemary added but I knew that not all of my guests would have agreed. For round two, my aim was to use up some vege-box-delivered mushrooms and silverbeet. I layered up a splash of olive oil, silverbeet sauteed with garlic, sliced mushrooms and a couple of rehydrated porcinis, then light scatterings of mozzarella and parmesan cheese. Finally, I couldn't resist revisiting the apple-pesto pizza.
It was great stuff for lounging around a grazing over, and it's been a pleasure to eat the leftovers in different topping combinations in the following days.

The Quick and the Dead Tasty pizza dough
(using a recipe seen at Yeah, That "Vegan" Shit, where it's credited to Everybody Likes Sandwiches)

In a large bowl, stir together the yeast and warm water until the yeast has dissolved. Add the flour, salt, agave/sugar, rosemary and olive oil and stir until well combined. I found that this dough was a lot drier than other pizza doughs I've made, and it took a while to pick up all the floury bits and incorporate them into the dough. Allow the dough to rest for 10 minutes.

Lightly flour a clean bench top and roll out the dough to fit your pizza tray - I found that I could make two medium-thin bases with this quantity of dough. Sprinkle cornmeal over the tray, place the base on top, and arrange over your toppings. Bake the pizza for 20-25 minutes, or until the crust is golden.
Posted by Cindy at 5:59 pm