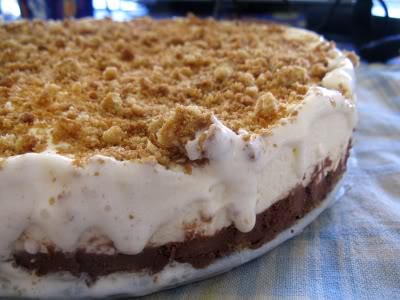 When I set my heart on icecream for dessert on Christmas day, I didn't go searching for something new and exciting from one of my favourite cookbooks or blogs as I usually do. Instead I wanted to restore a family summer tradition that faded a decade ago. My dad's and my birthdays fall only a day apart, and for many years we took it in turns to request Frozen Chocolate Crunch as our birthday cake. It doesn't look any more special than just layers of vanilla and chocolate icecream with a few biscuit crumbs, but there's just something about it. It could be the use of real chocolate, the whipped egg whites, or the coffee liqueur in the chocolate layer, or it could just be the numerous parties and holidays that I associate this dessert with.

My tastes have shifted and expanded since I last ate frozen chocolate crunch, but to my surprise and delight I enjoyed it just as much this year as I ever have. The one I made differed a little from the original recipe that I'll give below. For starters, I halved the recipe because Mum noted that she usually reduced it by a third and my memories were of a very large cake. The topping is typically a mix of toasted biscuit crumbs and slivered almonds (except for the time that Mum used Dad's favourite sweet, Smarties, for his 40th birthday) but I omitted the almonds for my nut-averse brother. I found that I didn't have enough chocolate mixture to make top and bottom layers, but this was plenty rich with the single chocolate base layer. What's more, there was plenty to share around twice on Christmas day with Mum, Carol and Liam, and still keep aside three generous slices for Dad, Liam and I a couple of days later. Frozen chocolate crunch
(as copied by my mum, from recipe card to email)