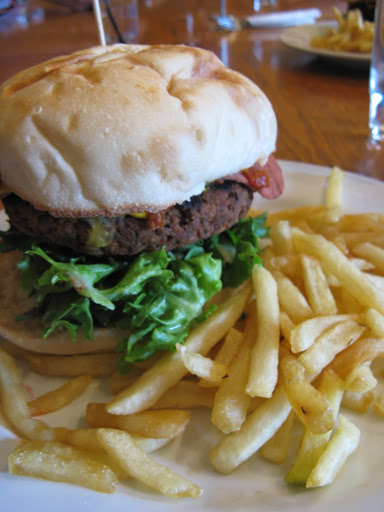 The $10 Mondays at the EBC are a sure-fire vegan winner - a board full of cheap pub food options, all veganisable with the help of cheezly and soy products. So with our fridge full of lunch leftovers, Cindy and I decided that a lazy pub meal was the order of the day. We'd envisaged parking ourselves in a corner, filling up on beer and food and riding back on home in time to get angry at the 3rd episode of The Howard Years (aside: is there anything more infuriating than Peter Reith's idiotic face? Answer: yes, Alexander Downer's pathetic simpering. Oh God, I've just got to move on).


Instead, we ran into an impromptu vegan meetup, starring Kristy and Toby, Rachel, Buttons, Caroline and T and, the guest of honour, Theresa from Tropical Vegan (visiting from Townsville). They kindly invited us to join them, and we settled in to the strange little dining room just off the main section of the pub. Cindy decided to branch out from the standard pub fare, opting for an Asian smoked duck and crispy wonton salad. 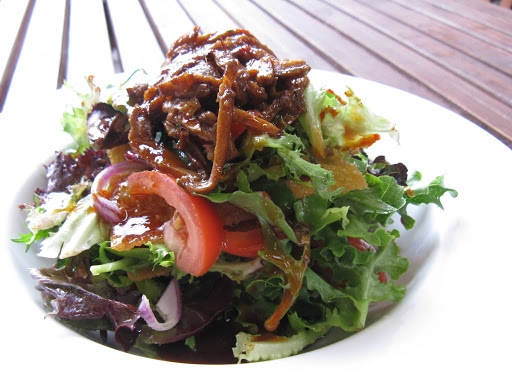 The duck was tender and duckish and the salad was fresh and plentiful, but the whole dish was smothered in some sort of sweet chilli-based sauce that was a bit too sweet and overpowered the whole dish. Still, where else can you get a vegan duck salad for $10?


I couldn't go past the pub-food options - this time I went for the cheese and bacon burger, with a big side of chips. The chips were much better than last time - surely a key factor in a good pub meal - and the burger was gigantic and delicious. Fake bacon will never quite bring the same flavours to the party as the real stuff, but the 'meat' patty was outstanding - maybe not quite up to some of our homemade efforts, but pretty close. The whole thing just filled the cheap pub meal niche brilliantly.


I was happily full after putting away my massive meal, but Cindy had been eyeing off everyone else's dessert and let me know that I should duck around and order her something. It's hard to ignore a choc-cherry cheesecake at the best of times, but I was even more intrigued to try a vegan version. I snuck a few mouthfuls away from Cindy and can confirm that it was outstanding. Lots of cherry mush smothering a delicious and slightly cheesy cake between two layers of chocolateness. Not too shabby. 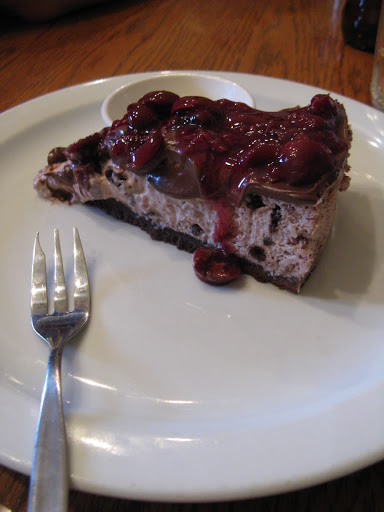 The service isn't really the pub's strong point - there were some strange delays between dishes arriving at our table, but it's worth noting that the EBC was packed out again - they've really found a way to fill the pub on Mondays.


So what began as a cheap and speedy meal turned into a cheap and chatty meal - it was great to meet Theresa, Caroline and T and to catch up with most of the Melbourne vegan blogging gang. Undoubtedly we'll return to the East on a future Monday, and we're almost certain to bump into some familiar faces when we do.

Read about our previous visits to the East Brunswick Club here and here.
Posted by Michael at 8:17 pm