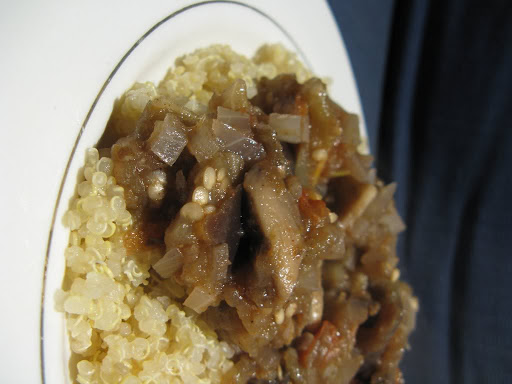 Our Oxfam 'World in Your Kitchen' calendar has been relatively successful so far. The focus is really on simple recipes, with relatively few ingredients that take less than half an hour to throw together, which is ideal for a lazy workday dinner. June's treat was from Ghana: mushroom and eggplant stew. I was a bit skeptical of this recipe - it seemed to be relying entirely on onion and a pinch of chili to flavour up the vegies. I ended up adding in a few teaspoons of garam masala towards the end of the cooking to boost the taste a bit.
It turned out to be a hearty, warming mush for a winter's evening. The extra spices were probably necessary - I think it would have been too bland for me otherwise. I'm not sure I'll rush back to make it again, but it was simple and reasonably tasty - full of chunky mushroom bits swimming in a mashed up eggplant sauce, with crispy onion bits providing the only textural interest. We opted to serve it on top of some quinoa, which worked pretty well - you really need something to soak up the liquid.
Mushroom and Eggplant Stew

Boil the eggplant pieces for 10 minutes or so until they soften up and then drain them (keeping the boiling water if you're using it for stock). Mash it up into a coarse mush.
In the meantime, saute the onion in oil for five minutes and then add the mushrooms, tomatoes, chili and salt. Fry the mix for 10 minutes or so until the mushrooms and tomato have softened.
Now stir in the mashed eggplant and stock and simmer for at least 10 minutes while your quinoa/rice is cooking. Stir in the garam masala about a minute before you want to serve it all up.
Posted by Michael at 9:00 am